The SecuTablet is a Samsung Galaxy Tab S that's secured for governments and businesses by BlackBerry's Secusmart service.

BlackBerry's latest tablet wasn't designed in Waterloo. It was designed in Korea by Samsung. In fact, it's really a Samsung Galaxy Tab S 10.5 rebranded as the SecuTablet.

The idea builds on the partnership between BlackBerry and Samsung in an attempt to convince more government and corporate IT departments to adopt Samsung's hardware and BlackBerry's software.

BlackBerry calls the SecuTablet a high-security tablet ideal for controlling sensitive data in international markets and enterprises. The device relies on the security suite from Secusmart, a Germany-based company BlackBerry purchased last year. Secusmart specializes in encrypted voice and data communications, and its suite of products is already used by the Canadian and German governments.

BlackBerry and Samsung looped IBM in the development of the SecuTablet, too. The tablet relies on IBM's secure app wrapping technology, which helps pair Secusmart's services with the various tools used by governments. The marriage between BlackBerry 10, BES, Secusmart, and IBM means the SecuTablet is a safe(r) choice for classified work. 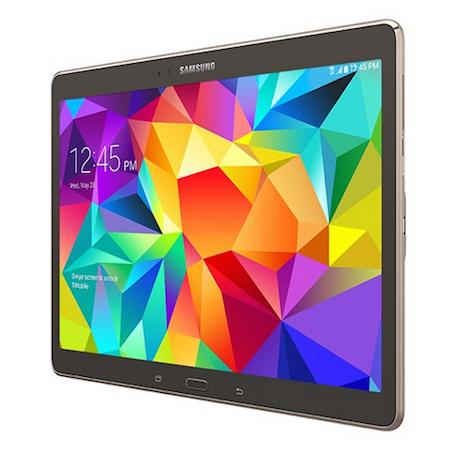 The SecuTablet tablet was designed by BlackBerry and Samsung to secure data for businesses and governments.

"The SecuTablet closes a supply gap and opens up for government and administrations an opportunity to derive greater benefit from digitization and the mobile Internet, with system integration as a fundamental success factor," Stefan Hefter, senior management consultant with IBM, wrote in a March 14 statement announcing the tablet. "We have contributed our longstanding expertise as a system integrator for mobile solutions. The technology used to make mobile apps secure by means of so-called wrapping has already proven its worth in the United States."

The tablet itself has a dazzling 2560 x 1600-pixel, 10.5-inch Super AMOLED display. It is powered by Samsung's Exynos 5 Octa processor, which has two banks of four cores at 1.9 GHz and 1.3 GHz. The tablet relies on a 7,900mAh battery that provides 9 hours of work time. The SecuTablet offers dual-band WiFi, Bluetooth, and GPS for connectivity. It's not clear if the SecuTab version of this device will be offered with LTE 4G. The tablet has an 8-megapixel main camera, a 2.1-megapixel user-facing camera, and a wide range of sensors. It has a built-in fingerprint sensor for security purposes.

[Read about the iPad Pro.]

Secusmart's software and IBM's software work in tandem with Android to keep the tablet on lockdown with respect to corporate and government data access. According to BlackBerry, the device is secure enough that owners can turn to traditionally unsecured personal applications, such as Facebook, Twitter, WhatsApp, and YouTube, with no fear of being breached.

BlackBerry is attempting to reforge itself as a strong mobile device management business. It recently said it will offer to manage all mobile operating systems through its BES 12 service, and is bringing business-focused hardware to market.

Samsung, too, has been angling for enterprise customers thanks to its Knox platform, which recently added more tools from BlackBerry's war chest. Samsung hopes to kick Apple's iPad out of the enterprise in favor of its own devices. Certainly there's a market for government-class security on tablets. BlackBerry and Samsung hope to find it together.

I agree.  While it might have been created with the best intentions, it really comes down to where the underlying interests lie.  We've seen strong security platform offerings from BlackBerry and Samsung in the past, but it really depends on the entire build, since sadly, many applications still have security leaks and so if only the underlying platform is secure, it's not necessarily going to help the overall security message.
Reply  |  Post Message  |  Messages List  |  Start a Board

I'm surprised anyone is willing to claim that a mobile device is really secure, given what intelligence services can do, not to mention malware.
Reply  |  Post Message  |  Messages List  |  Start a Board
Editors' Choice
Hot Topics