50%
Tweet
Romo is a mobile dock for smartphones that you control with another smart phone or other device, such as an iPad, or a Web browser. Crowd funding sites like Kickstarter and Indiegogo have made it easier to get a hardware startup off the ground.

Hardware projects can raise a lot of money on Kickstarter, and much of the hardware talks to smartphones or tablets in one way or another. The popularity of tablets and smartphones and crowd-funding sites like Kickstarter give hardware startups a chance to blossom.

Y Combinator co-founder Paul Graham wrote in his blog that investors weren't thrilled about funding hardware startups, and indeed, of the latest batch of 84 startups, only seven were hardware. But those attracted significant funding. YC company Boosted Boards, the world's lightest electric vehicle, raised nearly half a million dollars on Kickstarter. That seems low compared to Pebble, an e-paper watch for the iPhone and Android, which raised $10.3 million.

Graham wrote on his blog:

There is no one single force driving this trend. Hardware does well on crowdfunding sites. The spread of tablets makes it possible to build new things controlled by and even incorporating them. Electric motors have improved. Wireless connectivity of various types can now be taken for granted. It's getting more straightforward to get things manufactured. Arduinos, 3D printing, laser cutters, and more accessible CNC milling are making hardware easier to prototype. Retailers are less of a bottleneck as customers increasingly buy online.

Romotive is back for a second round of Kickstarter funding, to refine its "BYOD robot"--a mobile dock and application for smartphones called Romo. The founders of Romotive came out of TechStars Seattle this fall. The team spent four months building 2,000 Romos by hand, just in time for Christmas. Then it set up the production line in China. 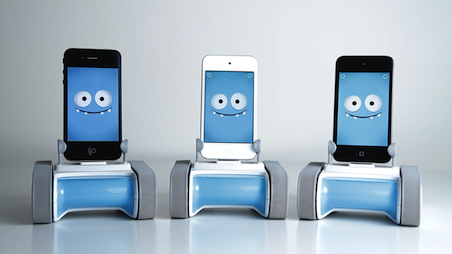 Romotive's promotional video, below, shows a docked phone in a Romo scooting along desks and floors, interacting with people and pets. The base and app add to smart phones autonomous navigation, remote two-way telepresence, and facial recognition.

Instead of using focus groups, Jen S McCabe, head of operations and business development at Romotive, said, "Kickstarter backers are the best beta testers on the planet."

Romo had 755 backers at last count who contributed from $150 to $500 apiece. Each backer will receive some version of Romo. The campaign still has 21 days to go, but already has reached its funding goal.

Pairing robotic devices with smartphones is a business "no brainer," said McCabe. "Devices are like the new Duracell for mobile hardware companies."

I can see a real benefit of being able to use the Romo to work remotely and navigate the office--although it's not quite clear, because it's so low to the ground, that others in your office will notice the Romo. Evernote's co-founder Phil Libin uses a much larger robot to roam the Evernote office.

Willow Garage's Steve Cousins once told me that every person in the future would have a robot and that open-source software would drive it forward. Now that smartphones and tablets are common in households and the workplace, the robot dream might not seem so crazy after all--and at $150 for a BYOD robot, well, that's pretty reasonable.

We welcome your comments on this topic on our social media channels, or [contact us directly] with questions about the site.
Comment  |
Email This  |
Print  |
RSS
More Insights
Webcasts
Building an Incident Readiness and Response Playbook
Linking, Orchestrating, and Managing Your Enterprise Security Systems
More Webcasts
White Papers
[Exclusive InformationWeek IT Trend Report] The Cloud Gets Ready for the 20's
Definitive Guide to Securing DevOps
More White Papers
Reports
Can You Spare 10-12 Mins to Help Us Out with a Survey on Tech Trends?
Got 7 Minutes? Dark Reading Needs Your Help With Our Survey on Incident Response
More Reports