In new research that could have wide-ranging effects on how smartphones work, researchers at Caltech have created a chip that can bring 3D printing to handsets.

Researchers at the California Institute of Technology (Caltech) have developed a new nanophotonic coherent imager (NCI) chip -- a square of silicon less than a millimeter in size. It could shrink 3D imaging technology to a size small enough to fit in a smartphone.

The high-resolution 3D imager could allow users to take a snapshot with smartphone, send it to a 3D printer, and reproduce a replica accurate to within microns of the original object.

Each one of the 16 pixels on the NCI chip uses an instrument called an independent interferometer to make precise measurements based on the interference of light waves.

The technology behind this capability includes LIDAR detection and ranging technology, which uses scanning laser beams to illuminate a target object. LIDAR is the same technology that is employed to help keep driverless cars safely on the road. It was used in a very recent test by engineers at Delphi using an Audio SUV in a coast-to-coast trip.

The work of the Caltech team is described in a paper called, "Nanophotonic coherent imager," and the research first appeared in the February issue of Optics Express. The tests were overseen by Ali Hajimiri, the Thomas G. Myers Professor of Electrical Engineering at the university. 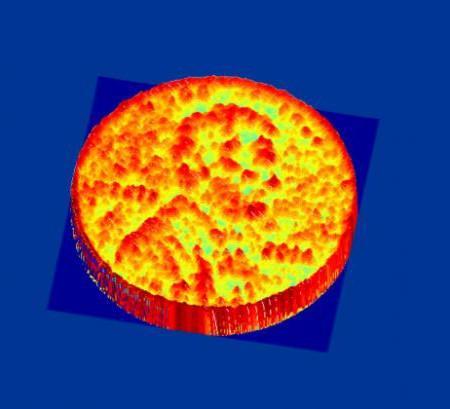 A 3D image produced by the new NCI chip.

In contrast to a typical smartphone camera, where each pixel represents the intensity of the light received from a specific point in the image, each pixel in an image created by the Caltech team's NCI provides both the distance and intensity information, allowing it to gather information about the object's size and its distance to create an image of its surroundings.

The NCI chip employs an optical concept called coherence, in which light has a consistent frequency and wavelength, to precisely measure the size of the object and the distance of each point on the object from the camera.

The information needed to create a 3D image is then gathered by converting the light into an electronic signal containing the distance and intensity particulars of the object, resulting in a precise measurement of its size and shape.

While the technology so far is limited to a current array of 16 pixels, in the future, the researchers also developed a method for imaging larger objects by first imaging a four-pixel-by-four-pixel section, then moving the object in four-pixel increments to image the next section.

That allowed researches to survey and scan the contours, hills and valleys of the face of a US penny. That scan was precise enough to provide a clear profile of Abraham Lincoln’s likeness and the "2014" date stamped to the right.

In addition, the current array of 16 pixels could also be scaled up to hundreds of thousands, which would offer a scanning area vast enough to be useful for driverless cars to monitor minute changes in road traffic, or for health IT applications to more accurately track subtle shifts in a patient’s heartbeat.

"By having an array of tiny LIDARs on our coherent imager, we can simultaneously image different parts of an object or a scene without the need for any mechanical movements within the imager," Ali Hajimiri, a professor of electrical engineering at Caltech, said in an April 3 statement. "The small size and high quality of this new chip-based imager will result in significant cost reductions, which will enable thousands new of uses for such systems by incorporating them into personal devices such as smartphones."

Although 3D imaging capability has been around for decades, more sensitive systems are generally far too big -- not to mention expensive -- to find a home in consumer applications.

Nathan Eddy is a freelance writer for InformationWeek. He has written for Popular Mechanics, Sales & Marketing Management Magazine, FierceMarkets, and CRN, among others. In 2012 he made his first documentary film, The Absent Column. He currently lives in Berlin. View Full Bio
We welcome your comments on this topic on our social media channels, or [contact us directly] with questions about the site.
Comment  |
Email This  |
Print  |
RSS
More Insights
Webcasts
Key technology trends in 2021 - Making these technologies work for your business
Detecting and Preventing Insider Data Leaks
More Webcasts
White Papers
Why Add Security to Your Skill Set and How to Do It
Key Strategies for Managing New Risks in Cybersecurity
More White Papers
Reports
Intelligent Outcomes Are Key to Business Resilience
The State of DevSecOps Report
More Reports

It doesn't seem that the 3D printing industry has reached a consumer phase yet. I'm not sure how far off it is, but seeing as how these types of consumer applications are still being researched I would gamble to say it's still a very long ways off.