50%
Tweet
What happens at CES 2013 doesn't stay in Vegas. From giant tablets to $20,000 televisions, take a peek at a few early standouts for gadget lovers. 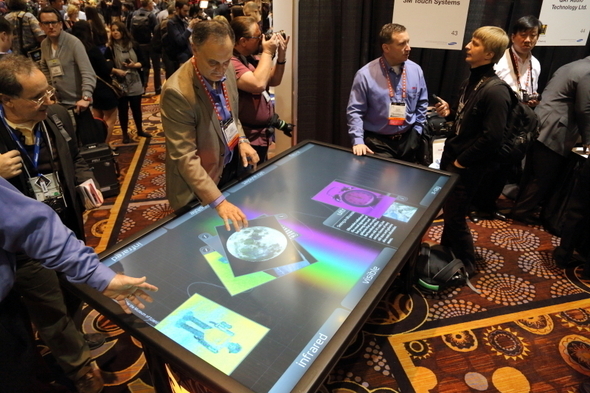 3M has brought large touchscreen displays to CES before-- but those products look positively Lilliputian compared to the mammoth 84-inch model on display Sunday night.

The screen uses projective capacitive multi-touch technology -- just like what's found in smartphones and tablets, but on a much, much grander scale. Resolution has been increased alongside physical dimensions; with a 3840 x 2160-pixel resolution, the device qualifies as a 4K display.

David Henry, marketing manager for 3M's touch group, said the giant touchscreen, which increases on the company's existing 46-inch model by more than 80%, is a prototype that will be shipping by the end of the year. The demonstration was running an app slated to appear as an exhibit at the Museum of Science and Industry in Chicago, one of many potential applications, he said. The retail space, for example, might harness the device to improve in-store experiences. Casinos have shown interest in the screen for table games. Henry said the plus-size touchscreen might even have a place in the enterprise, as many business intelligence units require methods for visualizing dense sets of data, such as layering demographics information, population density and sales figures over a map of all a store's locations.

10 CES Trends That Matter To Business

I like the idea of invoking a VPN specifically designed to protect data on mobile phones. I would be interested to see how stable it really is. If so, I think this will be a hit.
Reply  |  Post Message  |  Messages List  |  Start a Board

No kidding, I'd easily pay $50/year for a set it and forget it VPN that I often forget I have running
Reply  |  Post Message  |  Messages List  |  Start a Board

Thanks for pointing that out, vk. You're right; the screen is almost 83% larger diagonally, which is different than the increase in overall screen surface area.
Reply  |  Post Message  |  Messages List  |  Start a Board

Get a phone with Android 4.2, turn on the built-in "Always-on VPN" option. Done.

Though $50 a year isn't terrible for the service. Assuming it's decent (though looks like it requires stupid proprietary service) and speedy.
Reply  |  Post Message  |  Messages List  |  Start a Board
Editors' Choice
Hot Topics