The Freestyle drink dispensers will give consumers more than 100 beverage choices -- and provide the beverage maker with valuable consumption data. 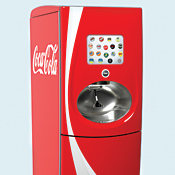 Refresh, refuel, and download some data
Coca-Cola doesn't think its customers have enough drink choices. So starting this summer, diners at some California, Georgia, and Utah fast-food joints will get to try a self-serve drink dispenser that pours more than 100 varieties of sodas, juices, teas, and flavored waters.

Coke plans to roll out the Freestyle drink dispenser nationwide, eventually putting tens of thousands of them in places such as McDonald's, Burger King, and Willy's Mexican Grill. And while the machine is taking the concept of customer choice to new heights, the most interesting aspect is the technology it's built on. Freestyle will become Coke's front-line robotic army for business intelligence, sending massive amounts of consumption data back to the beverage company's Atlanta headquarters.

Freestyle will let Coke more easily test new drink flavors and new beverage concepts, such as adding various vitamin combinations to flavored waters and juices. The dispensers each contain 30 cartridges of flavorings that mix up 100 different drink combinations. The cartridges are tagged with radio frequency ID chips, and each dispenser contains an RFID reader. The dispensers collect data on what customers are drinking and how much, and transmit that information each night over a private Verizon wireless network to Coke's SAP data warehouse system in Atlanta. The company will use the data to develop reports that assess how new drinks are doing in the market, identify differences in regional tastes, and help fast-food outlets decide which drinks to serve.

Test marketing via Freestyle will be a lot cheaper than the model Coke's been using: bottling and bringing to market new products that sometimes don't gain traction and get canceled after a year or two. "This is a huge jump from our current fountain dispensers," says Christopher Dennis, Coke's IT director of e-business transformation. "It's like going from the dial phone to the BlackBerry."

There's more to Freestyle than streamlining product development. It also will let Coke provide its fast-food outlet customers with more accurate inventories of the beverages they serve. Outlets leasing the machines from Coke will be able to view graphical drink consumption reports--such as ones that rank drinks sold during specific time periods--on an e-business portal Coke has set up.

Most fast-food restaurants collect data using point-of-sale systems that only capture beverage cup size and the number of cups sold each day. Those that collect more specific data on beverages customers order aren't always accurate, since many customers change their minds between the time they place their orders and walk over to the drink dispenser.

Besides collecting data on what customers are drinking, Freestyle also lets Coke know what flavor cartridges each dispenser holds, so the company can advise outlets on when to order more. Coke also will use the wireless network to send out new drink formulas to the beverage machines with instructions on how to mix them up. And should the soda company ever need to recall a flavor cartridge, the network also lets it instantly disable dispensers across the nation.

Coke plans to have about 60 dispensers in Atlanta, Salt Lake City, and Orange County, Calif., by the end of the summer. The dispensers will then be rolled out in other regions of the United States, and perhaps globally, Dennis says.

DIG DEEPER
Product Imperative
Coke's IT team puts collaboration to work to spur product development.
Download this
InformationWeek Report
See all our
Dennis describes the Freestyle machine as the company's first software-driven dispenser. It's been in development for four years, and it's the first close collaboration between Coke's R&D engineering team and IT organization. Soft drink purchases have been declining at fast-food outlets in recent years, and Coke is looking to Freestyle to increase sales by giving customers more beverage choices.

Coke is closely guarding engineering details of the machine, going so far as to manufacture the system at its own plant. Beverage machine makers usually approach Coke with new ideas. "We came up with this on our own," Dennis says.

He declined to provide details on Coke's investment in the machines, the cost to outlets to lease them, and the cost of cartridges. Some fast-food chains may deploy the Freestyle dispensers only to their largest outlets, Dennis says, and use BI gleaned from those installations to make inventory and promotional decisions at other outlets.