The Vessyl, a $99 cup, can analyze liquids down to the molecular level and display its findings, such as "beer."

A startup called Mark One has begun accepting pre-orders for a computerized cup called Vessyl that will tell you what and how much you're drinking, in case you weren't aware, lost track along the way, or merely thirst for data about yourself.

Vessyl is the latest "smart" object that aspires to be part of the emerging Internet of Things, a work-in-progress that promises better living through information we might have missed or calculated in our heads and might otherwise have gone unmonetized.

In a video, Mark Berman, VP of health for Mark One and a medical doctor, suggests the changes in behavior prompted by Vessyl's display of data can transform your life.

"As you use the Vessyl, it's going to learn more about you and your consumption habits and patterns," Berman says. "But the main goal is actually to help you make healthier and more informed decisions in real time."

The video shows a young man pouring a beer into his Vessyl and seeing the word "beer" light up on the side of the cup. This probably isn't the transformational aspect of the technology.

Vessyl apparently employs relatively sophisticated sensors for liquid analysis. A company spokesman declined to provide details, but said in an email that Vessyl's proprietary sensors "can identify, and break down contents to a molecular level."

Thus the electronic cup can identify fats, calories, sugars, caffeine, alcohol, and other chemical characteristics of the liquid within. And it is doing so by analysis rather than simple volume calculations. In other words, if you were to take a cup of coffee, remove 25% of its volume and replace that amount with water, you'd see the caffeine reading drop accordingly. That alone makes Vessyl interesting. The company claims Vessyl can even distinguish between commercial beverage brands, like Coke and Pepsi. 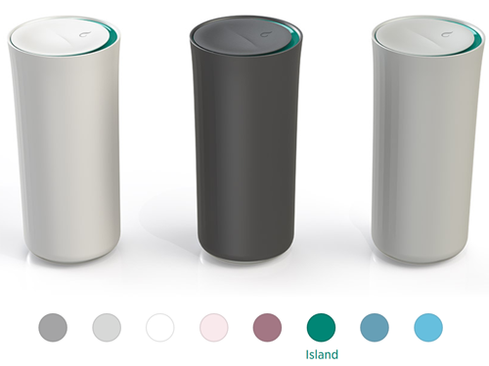 Asked whether Vessyl would alert a cup user to the presence of Rohypnol in a beverage, the company spokesman said he would check on the scope of the chemical library recognized by the device but noted that Mark One hasn't focused on things like Rohypnol because of the legal implications. "They're not trying to tell you if something is safe to drink, but are letting you know what is inside," the spokesman said.

Perhaps for version 2.0. Knowing whether a drink is safe would be far more valuable than receiving a readout that confirms what should be stated on any beverage label.

Vessyl can communicate with, but does not require, Android and iOS smartphone apps through Bluetooth 4.0. It's not dishwasher safe, but it's certainly an attractive, sealable mug if you're determined to add cup recharging and scrubbing to your daily routine.

Vessyl is available for $99 as a pre-order, or $199 when it is officially released next year. Although it might not cure you of gadgetophilia, Vessyl could appeal those obsessed with measuring their lives.

For those more concerned with living their lives, the value of such a device could prove more elusive. There are already effective ways to, say, track caffeine intake or water consumption using your brain. If you're a smart person, is it necessary to have a smart cup? There's a reason Nike's slogan is "Just Do It" and not "Measure It, Then Obey The Data."

Thomas Claburn has been writing about business and technology since 1996, for publications such as New Architect, PC Computing, InformationWeek, Salon, Wired, and Ziff Davis Smart Business. Before that, he worked in film and television, having earned a not particularly useful ... View Full Bio
We welcome your comments on this topic on our social media channels, or [contact us directly] with questions about the site.
Comment  |
Email This  |
Print  |
RSS
More Insights
Webcasts
Detecting and Preventing Insider Data Leaks
Hybrid Cloud: The Great Balancing Act
More Webcasts
White Papers
iPaaS Intrigue: A Faster Path to Digital Transformation
Accelerate Threat Resolutions with DNS
More White Papers
Reports
Tech Insights: Detecting and Preventing Insider Data Leaks
Intelligent Outcomes Are Key to Business Resilience
More Reports

This is one of the dumbest inventions I've heard of in recent times.  May be good at a club or bar to decide when to cut people off, but for personal use, if you're that lazy and/or stupid to not know what you're drinking and how much your're drinking, then this smart cup is the least of your problems.

Next, it will connect to facebook, and we can see all the idiots post how much beer or how many mixed drinks they've consumed so their employer and the law can use it against them.  Can't wait to see those surprised morons in the news..."Well I didn't know that posting on facebook would be evidence!!!".

In ten years, twitter, facebook, and things like this have moved us closer to what the Soviet Union wanted during the cold war than if they had just taken us over...And we're just volunteering for it all...Unbelievable.
Reply  |  Post Message  |  Messages List  |  Start a Board

I'd like the Vessyl to tell me the appellation of the pinot noir I'm drinking and the winery at which it was made. Adding its alcohol content might be helpful, but telling me the amount I've drunk would be downright intrusive.
Reply  |  Post Message  |  Messages List  |  Start a Board

>I'd like the Vessyl to tell me the appellation of the pinot noir I'm drinking and the winery at which it was made.

If only there were some paper labelling system that could convey all that data in a commonly understood language.
Reply  |  Post Message  |  Messages List  |  Start a Board

If this thing can tell me how many calories a liquid has, or the calorie count of a food sample that I've put thru a blender, then they've really got something here. Also salt content would be great to know. But, if I don't know whether I'm drinking beer or wine, then it's definitely time to go home - by taxi!
Reply  |  Post Message  |  Messages List  |  Start a Board

... to need a computerized cup to tell you you're drinking beer?
Reply  |  Post Message  |  Messages List  |  Start a Board

I'd be very interested to see if a device like this could break down every element in a drink and then give us an idea of how pure it is or if there's any adulterants. It would certainly be interesting to see if the claims of premium brands of alcohol are any purer than the cheaper ones.

On another note, I bet Coke and Pepsi are crapping themselves at the idea of this getting out there. Those formulas are well guarded.
Reply  |  Post Message  |  Messages List  |  Start a Board

>I'd be very interested to see if a device like this could break down every element in a drink and then give us an idea of how pure it is or if there's any adulterants.

My guess is that the company's reluctance to provide details about its technology indicates that the capabilities of its chemical analysis chip is fairly limited. I don't know how chemical compounds are assesses by electronics but I'd be surprised if a single chipset could evaluate the fully range of possibilities. Rather I suspect certain chips give you specific compounds (like sugars) and do nothing to look for, say, toxins, odd chemicals, or bacteria.
Reply  |  Post Message  |  Messages List  |  Start a Board

As a murder-mystery lover, this cup would ruin many a good plot line.
Reply  |  Post Message  |  Messages List  |  Start a Board

All of the media reports on Vessyl (they must have an tremendous PR Team...) are just verbatim Press Releases and glossy prototype and simulation videos, and endoresements from Silicon Valley "leaders" who have not been given any opportunity for unsupervised testing and honest opinions.

(The lack of any investigative journalism is appalling. Guess it just proves that hundreds of gadget, tech and business news websites are just screaming for free content.)

There are absolutely no independant scientific tests of capability and accuracy.

To follow or contribute to my discussion on this curiosity, please consider my Question on Quora: