The Dell Latitude 10-ST2 is billed as a full Windows 8 Pro tablet and Microsoft Surface Pro competitor. Like Windows 8 itself, the product isn't completely baked yet.

Tablet computing is all the rage right now. Apple has its iPad and iPad mini. Samsung has the Android-powered Galaxy Tab and Galaxy Note; and Microsoft has Surface RT and Surface Pro. Dell also has a Windows 8 Pro tablet – The Dell Latitude 10-ST2. How does it measure up to the expected tablet experience? Is it a good alternative to either the 64GB or 128GB Microsoft Surface Pro tablet? Let's take an in-depth look and find out.

The Dell Latitude 10-ST2 tablet is all black and covered on five sides with a slightly rubberized backing. The front is Gorilla Glass. It has a 10.2-inch diagonal screen pushing a 1366 x 768 resolution that defaults to landscape orientation. Its basic hardware specs can be found in the table below. After all is said and done, the device had a Windows Experience Index value of 3.3, attributed to its gaming and 3D business graphics. 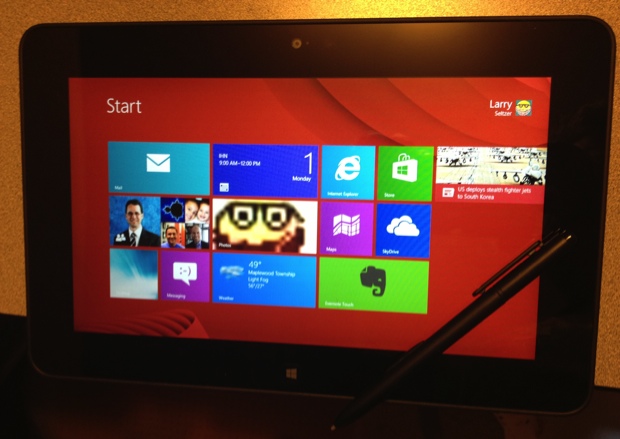 The Dell Latitude 10-ST2 with its pen. Click for larger image.

The Atom processor doesn't have a lot of horse power. In fact, it's pretty anemic. The system is optimized for a few specific apps – Microsoft Office being one of them – but don't expect it to power through anything else. The weak processor performance even seems to affect network traffic, disk I/O and display performance as well, though obviously system interaction between dedicated subcomponents will also factor in.

At 1.6 pounds, the device is also just a bit heavier than the iPad 4, which weighs 1.44 pounds. Believe me, you feel it. After a few hours of carrying the device from meeting to meeting and handling it as a digital notepad, you really notice how heavy and solid the device is. It doesn't feel cheap at all, though the $40 Dell carrying case that I got with it does. It's really nothing more than rubberized, plastic coated paper. This last issue is a bit of a sore spot for me with tablets in general. They're expensive, and finding a decent case made to specifically fit the tablet you've purchased, that doesn't cost an arm and a leg, is definitely not easy.

The screen is really nice to look at, though the device wastes a lot of real estate with its 1-plus inch bezel. I understand that digitizers can be expensive, but this is silly.

Touch sensitivity is good, but pen input leaves a bit to be desired. There really isn't any pressure sensitivity settings in the digitizer, so pressing harder on the Wacom active stylus doesn't do squat, no matter how often I do it. Its accuracy, even after calibrating and recalibrating is still noticeably off

There's also some screen lag the device isn't as responsive when writing with digital ink as it should be. At times, the gap between what's being drawn on the screen and the position of the pen is a little too large. The screen should be able to display what the pen writes before the pen really moves on.

The Dell Latitude 10 ST2 is one of the few Windows 8 Pro tablets I know of that comes with a desktop styled docking station, which provides a base to charge the tablet as well as monitor and LAN connectivity. It also provides a number of USB 2.0 ports and an audio port. It's not a bad option, but it's not providing a compelling reason to purchase the tablet.

The biggest problem I've seen with the docking station is that it doesn't have a standard PC monitor port. While mini HDMI isn't a bad port choice, most existing monitors don't have a mini HDMI port on them. In fact, there aren't a lot of PC monitors that have HDMI ports on them, either. But HDMI to VGA connectors are cheap. 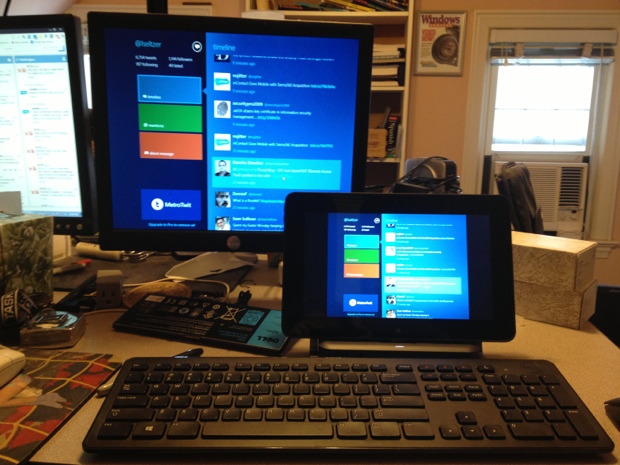 The Dell Latitude 10-ST2 in its docking station with monitor, wireless keyboard and mouse. Click for larger image.
We welcome your comments on this topic on our social media channels, or [contact us directly] with questions about the site.