Right now digital globes are too expensive for most classrooms, but promise an exciting new way to teach geography and more. 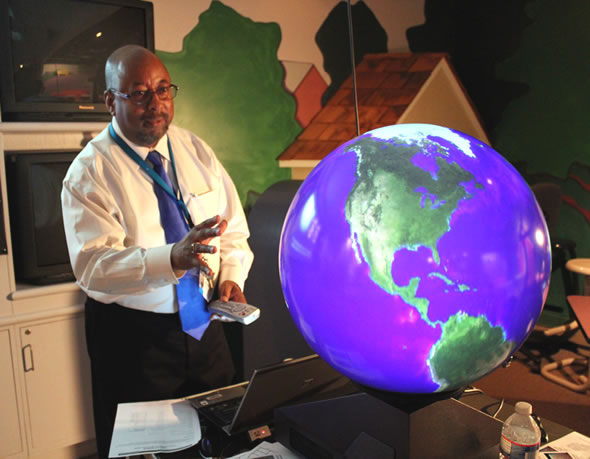 China has recommended the Magic Planet as a piece of standard classroom equipment, which has swamped Global Imagination's production in Campbell, Calif. "We can't keep up with demand," said Mike Foody, CEO of Global Imagination. China was already by far the company's largest market, with more than 1,500 globes installed in 800 schools. In contrast, there are six school districts in the U.S. using its globes. (Others might use digital globes from rivals such as iGlobe or ARC Science.)

To meet that $2,500 price, he's hoping to convince a Chinese manufacturer to produce globes. China is the main source for the specialized projector components that power the digital globe's display.

Schools are a breakout market for the Magic Planet, first sold to NASA and to museums. Foody said they work well for teaching, because they offer 3-D visualization for objects that are indeed three-dimensional. He says the brain has to do a lot of work to convert a flat map into a 3-D image.

However, he said that entrepreneurs often underestimate how much time it takes adopters of new education technology to do new things. "You hear a lot about revolutionizing education and completely revamping the way it's done," Foody said. "One of the biggest challenges is teachers don't have a lot of time."

Ellis, for instance, spent nearly three months developing his Magic Planet curriculum in Richmond. But as the globes spread in education, resources should increase, which might help teachers round out their lesson plans.