California case says drivers can use smartphone maps in cars without fear of getting a ticket.

Thanks to Steven Spriggs's legal odyssey, drivers in California can use their smartphones as maps without the fear of being slapped with a ticket. They're still forbidden from talking on phones and sending messages when behind the wheel, though. The case highlights the growing use of mobile devices in spaces where they can put lives at risk.

Spriggs's problem began in January 2012 when he was stuck in construction-related traffic. Seeking a way around the roadblock, Spriggs grabbed his iPhone 4 and used the map app to seek a better route. Unfortunately, a police officer riding by on a motorcycle witnessed Spriggs use his phone behind the wheel and wrote him a $165 ticket. California law prohibits drivers from using mobile phones when motoring. Fortunately for Spriggs, the law isn't particularly clear on the subject, and that's what eventually helped Spriggs escape the ticket.

Spriggs lost his initial case in traffic court, as well as an appeal with the Fresno County Superior Court. After serving as his own counsel and losing the first two cases, a law firm stepped in to help pro bono. The case eventually made it to the 5th District Court of Appeals, which reversed the Fresno County ruling. When Spriggs was cited, California law said that "listening and talking" on cellphones was illegal, but that left plenty of room for other, legal uses of smartphones when driving. (Texting was later made illegal.) Spriggs was vindicated because he wasn't listening or talking, and was instead using the device's navigation features.

This doesn't mean Spriggs is in favor of distracted driving. In fact, it's quite the opposite. Spriggs's own son suffered a broken leg when hit by a driver talking on the phone. "We're distracted all the time," Spriggs said in an interview with the Associated Press. "If our distractions cause us to drive erratically, we should be arrested for driving erratically." Twelve states, plus Washington D.C., prohibit drivers from talking on cellphones without hands-free equipment. Most also prohibit drivers from texting (or sending any sort of message) from behind the wheel. 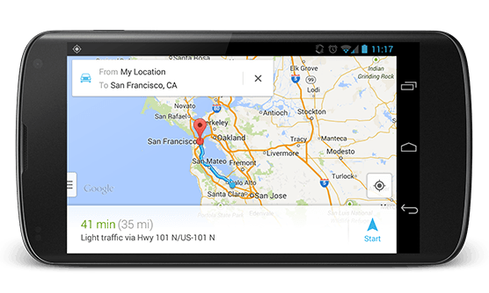 It is easy to understand why the officers involved in both cases wrote the tickets. They felt the drivers involved were distracted by the devices at hand. The cases also call attention to the vagaries of law and what happens when they are not specific enough. Some might argue that there's little difference in typing a message or typing a street address on their phone when driving. Either activity can be distracting.

Wearable devices will surely compound the problem. This week saw a slew of new wearable announcements from consumer electronics makers. How will smartwatches and fitness bands be regulated, if at all? How does tablet use factor in? There's no doubt that distracted driving endangers lives. Finding the balance in legislating -- and, more importantly, enforcing -- the use of mobile technology in cars is going be nettlesome at best.

Eric is a freelance writer for InformationWeek specializing in mobile technologies. View Full Bio
We welcome your comments on this topic on our social media channels, or [contact us directly] with questions about the site.
Comment  |
Email This  |
Print  |
RSS
More Insights
Webcasts
Building Asset Management into Your Enterprise Security Strategy
Take DevOps to the Next Level
More Webcasts
White Papers
A New Take on Cloud Shared Responsibility
The Five Major Security Pitfalls of WFH and How to Solve Them
More White Papers
Reports
The State of Endpoint Security
Immuta Data Engineering Survey: 2021 Impact Report
More Reports

Device makers and car markers ought to get together to establish a standard for disabling drivers' mobile devices when driving or at least notifying the driver not to use mobile devices while in motion.
Reply  |  Post Message  |  Messages List  |  Start a Board

I suppose this will eventually become a non-issue as mapping apps become standard technology included in the base price of new cars. But for now, it's a really interesting development. Hats off to Steven Spriggs for making sure he got his day in court!
Reply  |  Post Message  |  Messages List  |  Start a Board
InformationWeek Is Getting an Upgrade!