50%
Tweet
The Droid Razr M is an affordable, entry-level Ice Cream Sandwich phone with a trim size and gorgeous screen going for it. There is relatively little bloatware from either Verizon or Motorola to get in the way, and the big sealed-in battery lasts a long time on one charge.

I've not been a Motorola fan as of late. After the Razr M, though, I might be.

My first experience with a Motorola Android-powered smartphone was the dreadful Cliq XT, an underpowered product abandoned almost as soon as it was released. It ran--more like wheezed--on Android 1 point something, and was never upgraded to anything better. I ended up rooting the device with CyanogenMod just to squeeze another couple of months of life out of it.

The Droid Razr M, the thin-and-light model in Motorola's new Droid Razr lineup, was good enough not only to take the taste of the Cliq XT out of my mouth, but to bode well for all future variants of the Android-powered Razr to come. No overthrow of Apple is in the works here--that'll take more than one phone to pull off--but the Razr M amounts to one more reason to choose Android.

First and best, the Droid Razr M is inexpensive, thanks probably to Verizon: $149.99 with a two-year Verizon contract, $99 with a mail-in rebate. It's small and light while at the same time sporting a display large enough to make movie watching, mail reading and Web browsing enjoyable instead of eye-straining. And it serves as a showcase for Motorola Mobility and Google's first steps together as partners.

The Razr M is 8.4 mm at its thinnest (a full 1cm at its thickest, as it has a sloped bezel). But Motorola has resorted to an old trick to make the phone as thin as possible: the 2000 mAh battery cannot be removed, at least not without tools. The phone's other dimensions--12.2 x 6.1 cm--allow it to fit comfortably in the palm, and its 960-pixel-by-540-pixel Gorilla Glass screen runs almost completely edge-to-edge and sports gorgeous color and brightness. Front and rear cameras allow for videoconferencing and 1080p video capture. The SIM and MicroSD card slots are protected by a pop-off side door--don't yank it too hard--and the guts of the phone are powered by a 1.5-GHz dual-core processor with 8GB of flash storage and 1GB of RAM, about 800MB of which was available for applications. Also included is NFC support, a must for any Motorola Mobility device because it will enable things like Google Wallet.

The most common complaint I've heard about every make of smartphone is the way the handset makers and carriers shovel in so much irremovable junk. Mercifully, the Razr M keeps that to a minimum. The included edition of Android 4.0 (Ice Cream Sandwich) is straightforward and clean, and isn't tricked out with the kinds of silly skinning functions that have made most high-end Android phones so annoying. One preload I didn't object to is the Android edition of the Google Chrome browser, which can synchronize with your desktop edition of the program and keep bookmarks, stored passwords, and all the rest immediately available. 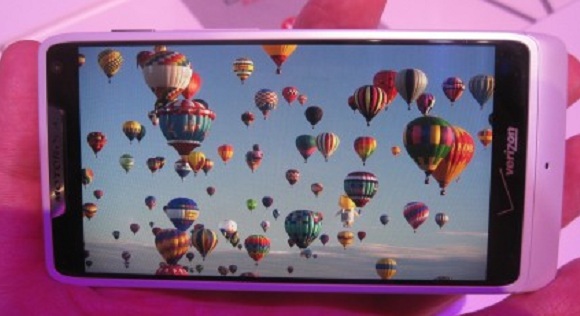 The Droid Razr M up close.

Even when on Verizon's 4G LTE network, the Razr M's battery life was sound, lasting a whole workday and then some. Motorola has a power-conservation system called Smart Actions that can extend battery life even further, and which can be triggered by various conditions such as time of day or physical location. Example: my own custom Smart Action settings turn off 4G data after 8 p.m. and fall back to Wi-Fi, which is also switched off after midnight. You can always manually override a Smart Action if need be.

An upgrade to Android 4.1 (Jelly Bean) is scheduled for later this year; no date has been set yet. And as with almost every phone made today, there's some preloaded bloatware: Facebook, NFL Mobile, Zappos. But even as it stands, without the most bleeding-edge version of Android, the Razr M is a trim and solid piece of work, especially at this price. It gives hope that Android stands a chance of transcending its fragmentation issues.

A basic but well-designed Android smartphone, the entry-level Motorola Droid Razr M is a slim unit that offers a comfortably big screen and good user experience.