12 Open Educational Resources: From Khan to MIT
(click image for slideshow)
Is Edmodo Facebook for education? Yes and no.

Much as enthusiasts for Jive or Yammer hesitate to embrace the "Facebook for the enterprise" label because of the potential implication of frivolity, the teachers and school systems who have learned to love Edmodo hesitate to describe it as a social network. It is, sort of, but that's only part of what it is. Sure, there's a nod to Facebook in the blue background color scheme and the layout organized around a central news feed. But if you consider it a social network, it's meant to be one that's safe enough for a kindergartener to use.

Having led the coverage of social software for The BrainYard before being assigned to InformationWeek Education, I've been curious to see how much that movement has connected with education. That's part of my fascination with Pearson's OpenClass in higher education. Edmodo is interesting because of the way it has molded social into a shape that suits education at the K-12 level: as a free service that's teacher-friendly and easy for school districts to adopt, typically after they find out their teachers are already using it.

"It's probably the best resource a teacher could have," said Renee Setser, an instructional technology coordinator for the Manor, Texas, school district. Even teachers who are generally technology averse are slowly coming around to seeing Edmodo's benefits, she said, "as long as we don't say they have to use it and just model what you can do with it."

I spoke with several Texas educators about Edmodo during the South by Southwest conference in Austin last month. Barbara Mikulecky, a teacher at Frank Seale Middle School in Midlothian, Texas, told me she had loaded a week's worth of lesson plans into the system before heading to the conference so that the substitute teacher covering for her would need to act only as a facilitator and disciplinarian.

I also made some inquiries about Edmodo's widespread use in my local school district in Broward County, Fla., where teachers had started using it on their own before the school system eventually gave its official blessing. I'm told school officials in neighboring Palm Beach County were initially more skeptical but have begun to embrace Edmodo more this year.

That pattern of adoption is playing out across the United States and around the world, said Crystal Hutter, chief operating officer at Edmodo. "Of the hundred largest districts [in the U.S.], 86 or 87 have set up administrative features and have their own communities for the teachers and students in their districts. But it's really driven by grassroots adoption."

Using Edmodo, teachers invite students into private groups that can be used for online classroom discussions, but in a format that keeps the teacher firmly in control. Teachers give students a class signup code, which can be deactivated once all students have signed up, and students in turn are encouraged to share the code with their parents, allowing them to monitor their own child's activity. As an invitation-only social network, Edmodo is meant to mirror a secure offline classroom that intruders cannot access, with rules of decorum enforced by software. For example, just as students aren't supposed to pass notes in class, they can't send private messages to each other. They can post only to the group or the teacher, and group messages can be moderated by the teacher if necessary. 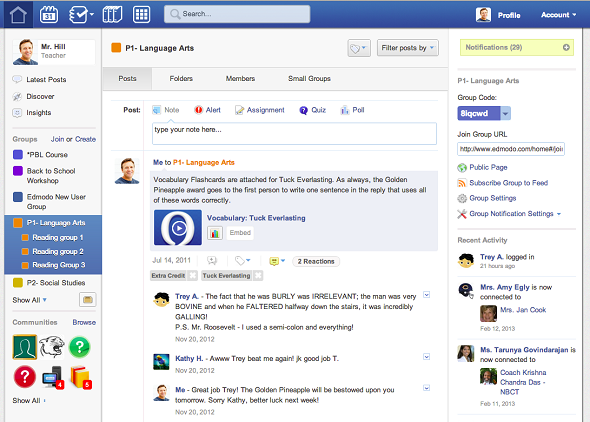 With its file sharing and scheduling, built-in tools for administering tests and quizzes and growing library of third-party apps, Edmodo is also developing into a lightweight learning management system, available for free to teachers and school systems. For an example of how apps fit in, see this blog post on how one teacher is using an app called Subtext to encourage students to annotate and comment on their readings in a language arts class.

As one school district technology leader explained it to me, teachers use Edmodo as a way "to deliver material to students, where they can't lose it in their backpack." Although her school system has an official online grade book system for parents to check on their student's progress, many teachers use Edmodo for more routine updates to students and their parents about assignments and deadlines.

Despite the restrictions on online social interaction by students in an Edmodo classroom group, there is still a chance of someone posting inappropriate content -- but the teacher has the power to shut that down quickly and limit individual students to read-only access, if necessary. "It really is a rehearsal for the kids, for later on, because social networking is a reality," one educator mused. "It's better for them to be inappropriate in this environment, where the teacher can facilitate redirection, than out in the world where they can get in big trouble."