50%
Tweet
The software giant is finding that modest sales are the sweet spot for Surface hardware, but is it a winning business model? It could be. Surface doesn't have to be as big a hit as the iPad for Windows 8, and therefore Microsoft, to win big. More than Surface itself, Microsoft needs to get Windows 8 and the app model working, and for that the success of Lenovo, Dell, HP and other OEMs is also good for Microsoft.

Microsoft has been forced into a conundrum in sales of the Surface. To see how, look at the two extremes.

Obviously a Surface sales flop is a bad thing for Microsoft. They have put a lot of money and prestige behind Surface and the new app model of Windows 8/RT on which Surface relies. That kind of failure labels the Surface/Windows 8 undertaking a failure, making Microsoft irrelevant after Windows 7. OEMs will suffer even worse than if the Surface was a runaway hit because a doomed OS is on their hardware.

On the other hand, assume the Microsoft Surface wins big, really big — iPad big. That would be a dagger in the heart of the OEMs like Dell, HP, Asus and Acer who are all struggling with thin margins in the post PC era. Lenovo, now the world's biggest PC maker, reported a 1.4 percent profit margin for the second quarter of 2012. But a weakened Lenovo ultimately is a weaker Microsoft because fewer units of Windows 8 are shipped. PC sales are already down 21 percent over last year.

So Microsoft doesn't want a big win or a big loss. That's what happens when you are competing with your OEM partners in their space. In fact, not only is Microsoft competing with OEMs, but it's also competing with retail outlets. Best Buy won't get a piece of each Surface sale or the foot traffic from the Surface advertising.

On the other hand, you will find Windows 8 systems from Toshiba, Asus and HP at Best Buy. Microsoft put up its biggest marketing budget ever for a Windows release. Ad age says the Windows 8 campaign alone is $1 billion. The Windows 95 promotion was $400 million in today's dollars, and the retailers and OEMs benefit tremendously from it.

But this most ambitious ad campaign in company history is followed by measly distribution for Surface. The Wall Street Journal blames poor sales for Surface on the fact that people can't touch it — can't touch it. If you don't have access to one of the relatively uncommon Microsoft Stores then you can buy it through Microsoft.com, but that doesn't let you get your own hands on it to try it. Customers can't compare it side-by-side with the Lenovo Yoga or the Asus Transformer. But go down to Staples or Best Buy and you can try a Windows 8 device from an OEM such as HP or Samsung. 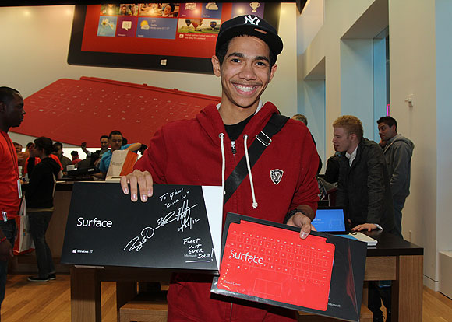 Microsoft has not reported Surface sales yet. Rumors — from less than reliable sources — say that Microsoft has slashed orders from 4 million to 2 million. Other says only 600,000 have sold.

In an interview with French daily Le Parisien, Steve Ballmer said early sales were "modest," and he also attributed it to the lack of distribution.

"Modest" works fine for Microsoft because of high profit margins on the product. While OEMs struggle with a slim profit margin from hardware sales, Microsoft enjoys one as large as Apple's. According to iSuppli.com, the Microsoft Surface RT is more profitable than the iPad, earning more than $300 per unit without the keypad and $400 with it.

Assuming the lower number of $300 profit for the device and a million sold — which is just an estimate — Microsoft will earn $300 million from its flagship hardware. Of course it doesn't account for the three years of R&D and the billion plus it's dumped into advertising, so it's far from profitable yet, but revenue of $300 million by Christmas is not a failure, at least it's not a failure in the short term. In fact, if it weren't measured against Apple's consistently staggering number of iPads, Minis, and iPhones sold annually, industry experts would applaud it.

The software/hardware giant is finding that modest sales are the sweet spot for the Surface, but is it a winning business model? It could be. Surface doesn't have to be a smash hit for Windows 8 — and therefore Microsoft — to win big.