Fujitsu might not be a household name for tablets on the order of Apple, but perhaps only because it's not really a household name for PCs in general. Fujitsu has aimed its products at the corporate market, intending them to be deployed as fleets rather than purchased by individuals. That doesn't mean individuals can't go out and pick up Fujitsu's hardware--only that Fujitsu knows its market and caters to it.

At least it did until the Fujitsu Stylistic Q550, a tablet that is well-equipped enough for business users but suffers from input problems. With its 1.5-GHz Intel Atom Z670 processor, 2GB of DDR2 800 memory, and $729 list price for a 30GB solid-state drive ($849 for 62GB), the Fujitsu Stylistic Q550 is a corporate machine for modestly-powered line-of-business applications. It's certainly not a desktop-killer, or iPad-killer either. Fujitsu made the mistake of trying to use Windows 7 as-is on a tablet, and that OS simply does not work well on such hardware -- especially since the hardware itself has its own shortcomings. 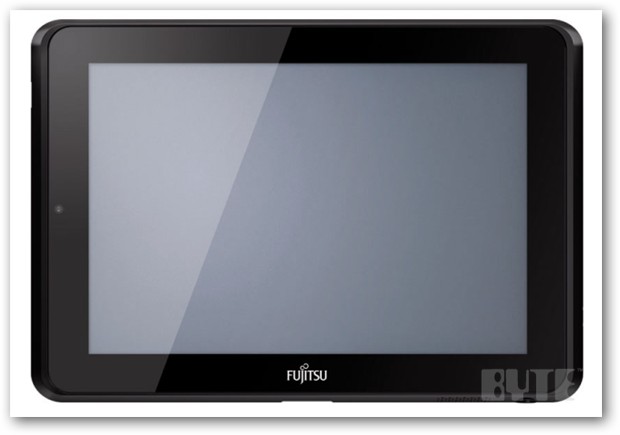 Business features like TPM and a smartcard slot keep the Stylistic firmly out of the "iPad-killer" category.

Aside from the processor and memory, Stylistic's hardware features are solid: a 1280-pixel-by-800-pixel touchscreen, front- and rear-facing cameras, HDMI and USB connectors, an SD card slot, and built-in microphones. The most corporate features of the bunch reflect the tablet's destination in the enterprise: fingerprint reader, smart-card slot, and TPM. OmniPass fingerprint reader software comes preloaded, and while you can log into Windows with a fingerprint, you can't fingerprint-protect the system boot cycle. My test unit came preloaded with Windows 7 Professional (32-bit), which includes support for BitLocker on-disk encryption and all the other enterprise-level management features you've come to expect from that OS. 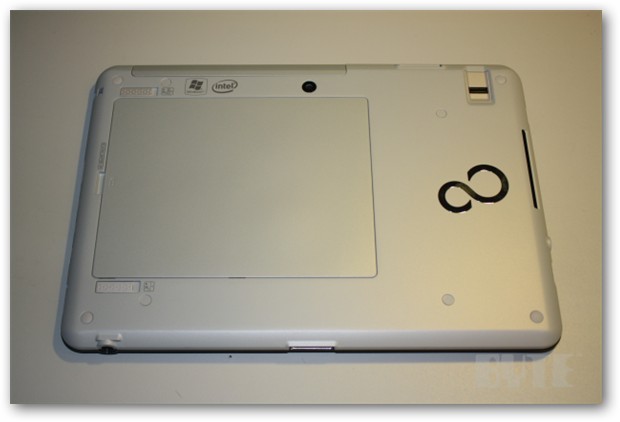 Rear of the unit. The large square panel is the battery back. The fingerprint reader is at top right.

The single biggest shortcoming of the Stylistic is not the unit itself, but the way Windows 7 implements touch technology: badly.

Let's start with typing because that's where the problem becomes the most painfully clear. If you have the tablet in landscape mode, the on-screen keyboard fills enough of the screen that it often blocks what you're typing entirely. Dock the keyboard at the bottom of the screen and you're left with only about half the screen's vertical space. Switch to portrait mode and you get a good deal more on-screen space to deal with, but the keys are smaller. No matter what size or orientation the keyboard, though, typing onscreen is always far slower and less responsive than using mechanical keys.

It gets worse. Typing in the Start menu--for instance, to search--is nearly impossible in landscape mode if you have the keyboard docked at the bottom because the Start menu itself covers up the keys. You have to re-dock the keyboard at the top of the screen (or let it float freely), or switch to portrait mode.

Fujitsu compounds the problem by offering no fixes short of attaching a physical keyboard. I tried plugging in a wireless keyboard via USB and was able to make fine use of that, but that's scarcely a practical solution for the tablet's intended use. The only other alternative is to use it continually in portrait mode. 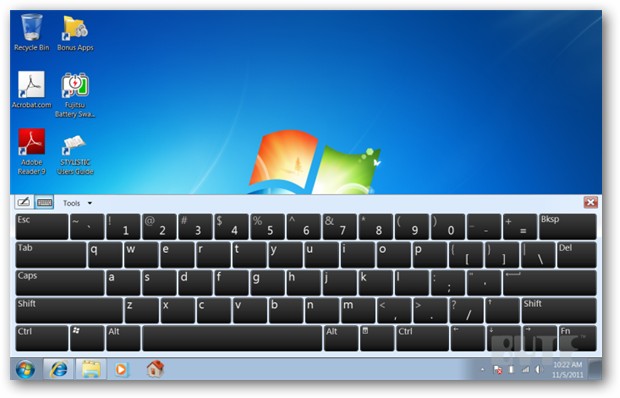 Windows 7's on-screen keyboard uses up so much acreage in landscape mode, it's almost impossible to use.

When Windows itself doesn't fall short with touch, the tablet's own limitations come back into play. The screen's matte surface doesn't lend itself to flicks or fast finger gestures generally, so those used to the iPad's glossy front (or even the Gorilla Glass face of their smartphone) will be put off. Also, its touch sensitivity is all over the map. Sometimes a simple tap will do; sometimes a fairly fierce poke is needed; and sometimes nothing works. It's hard to tell if this is the display itself or Windows's handling of the display.

Another potential hardware issue: there's no disk activity light, which means one of the signs that the machine is doing something no longer exists. When you put the system into hibernation, for instance, you get a blank display and then a long wait for the power light to finally go out, with no indication that anything is actually happening. It would have been nice if Fujitsu had provided some kind of software activity light (in the system tray, for instance) to alleviate this.

Fujitsu estimates four hours of battery life on the unit, which is not going to get most people through the day unless they have ample time to dock and recharge. As partial compensation for this, Fujitsu made it easy to swap out the battery pack, both by making the pack readily accessible from the back of the unit and by placing a battery swap utility on the desktop. This is little more than a quick link to put the system into hibernation, so you can swap batteries if needed--provided you sprang for the spare battery in the first place.

In sum, this is a middling piece of hardware, with some good business-centric features (fingerprint recognition, smart card support), but it's hidebound by Windows 7's terrible handling of touch input. Maybe a Windows 8 iteration, when that comes out, will be more palatable.

Based in Long Island, NY, Serdar is founding senior editor managing reviews at BYTE. He's a well-known tech reviewer in multiple media. Follow him on Twitter as@syegulalp and email him at [email protected].

We welcome your comments on this topic on our social media channels, or [contact us directly] with questions about the site.
Comment  |
Email This  |
Print  |
RSS
More Insights
Webcasts
DevOps: Innovating with Speed, Security, and Quality
Now That Ransomware Has Gone Nuclear, How Can You Avoid Becoming the Next Victim?
More Webcasts
White Papers
DevOps for the Database
Wired vs. Wireless LAN Solution
More White Papers
Reports
Online Threats -- and What Your Org Can Do About Them
[Special Report] Remote Network Management
More Reports