0%
Tweet
Many Samsung fans are furious the company sealed the battery deep inside the Galaxy S6. It doesn't help that the phone's battery life leaves something to be desired.

Samsung stepped up its design game with the Galaxy S6 and S6 Edge. The South Korean company's flagship smartphones trade in cheap plastics for high-quality metal and glass. This decision didn't come without compromise, however, and Samsung was forced to seal the battery inside the phones' chassis in order to achieve its design goals.

Without a user-replaceable battery, many die-hard Samsung fans are howling in disapproval. What's behind their discontent?

The Apple iPhone was one of the first major smartphones to ship with an inaccessible battery. Every iPhone released since 2007 has been sealed up tight, leaving owners with no ability to swap out the power cell. Mike Lazaridis, co-CEO of BlackBerry when Apple introduced the original iPhone, skewered Apple for the decision and touted BlackBerries' removable batteries as a significant benefit.

Later, HTC followed suit. It, too, sealed the battery in place so it could achieve more appealing smartphone designs. HTC's One X, One M7, One M8, and One M9 all have inaccessible batteries. Google also moved to sealed designs with the Nexus 4, Nexus 5, and Nexus 6 smartphones. 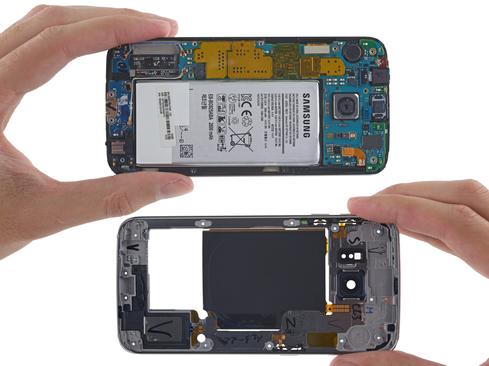 What are those benefits?

First, if your device locks up entirely (as 2007-era BlackBerries were wont to do) you could simply pull the battery to reboot it. Second, and more importantly, removable batteries allow users to swap in a spare if the main power cell runs dry. These arguments may have made sense in 2007 and maybe even 2010, but they no longer do in 2015.

If an iPhone locks up, a long press of both the power button and home button will reboot it. Most Android devices have similar reset functions. This reset feature has worked without fail for years, negating the first argument entirely.

Over the last few years the consumer electronics industry has supported the idea of irreplaceable batteries by churning out portable battery packs. Prices for these packs range from $10 to $150 depending on capacity, number of ports, and charging speed. The flexibility and portability of third-party battery packs can't be overstated. Many offer enough capacity to fully recharge two or more smartphones. Some can recharge tablets and even laptops. The fact that they work with most battery-powered devices via standard USB ports and can be tossed easily into briefcases, backpacks, and purses makes them an ideal solution.

The other big advancement to consider is QuickCharge technology. Many of today's flagship smartphones -- including the Galaxy S6 and S6 Edge -- support rapid battery charging. Samsung's marketing materials say the S6 and S6 Edge can suck up four hours' worth of battery life in just ten minutes of charging time. The phones can reach 75% capacity in about an hour.

Perhaps the loudest argument I've heard over the Galaxy S6 and S6 Edge battery has more to do with flexibility and the perceived notion of control over our own possessions. Some say sealed batteries simply aren't consumer friendly, and they do cost more to repair. Last, consumers are being asked to trade this flexibility and control for design, for a phone that might look better or be made from nicer materials. Is the trade a fair one?

In the case of the Galaxy S6, the compromise would be less painful if the battery life were better. The phone hardly lasts a day, which is the critical benchmark for all smartphones.

What do you think? Feel free to sound out in the comments below.

I would rather spend the extra £100 for a phone that doesn't need topping off througout the day.
Reply  |  Post Message  |  Messages List  |  Start a Board

I have been a longtime Samsung fan and was looking forward to the S6, particularly for the amazing camera.  The reviewers conclusion that being able to swap out the battery is hardly a useful convenience made me angry. I bought a cradle to recharge my batteries online for about £10. When Im out and about or travelling I can fit a spare battery in my wallet. No battery packs are that slim yet. I think Samsung will regret this particular model, I for one will not buy one and wait for a better alternative.
Reply  |  Post Message  |  Messages List  |  Start a Board

S6 is an excellent phone which could have been great. The 2550 Mah Battery is a result of the "Thinness Race" - the idea that a very thin phone is more "premium" the buzzword all the Reviewers copy from each other. At about .6 or so millimeters thicker = about 7.5 millimeters thick the S6 could have a 3100 Mah Battery and MUCH better work day use. AND a much longer life before needing replacement due to reduction in Capacity from multiple charges 200 to 400 Cycles may reduce up to 30%! NO ONE thinks you are more stylish, handsome,pretty because your Phone is under 7.0 millimeters thin. And IF they do you won't be able to really flirt with them on your Phone- because your Battery is dying.... No you can't wait 10 minutes for a quick charge in the middle of a Conversation- mood is gone...lol.
Reply  |  Post Message  |  Messages List  |  Start a Board

S6 is an excellent phone which could have been great. The 2550 Mah Battery is a result of the "Thinness Race" - the idea that a very thin phone is more "premium" the buzzword all the Reviewers copy from each other. At about .6 or so millimeters thicker = about 7.5 millimeters thick the S6 could have a 3100 Mah Battery and MUCH better work day use. AND a much longer life before needing replacement due to reduction in Capacity from multiple charges 200 to 400 Cycles may reduce up to 30%! NO ONE thinks you are more stylish, handsome,pretty because your Phone is under 7.0 millimeters thin. And IF they do you won't be able to really flirt with them on your Phone- because your Battery is dying.... No you can't wait 10 minutes for a quick charge in the middle of a Conversation- mood is gone...lol.
Reply  |  Post Message  |  Messages List  |  Start a Board

The HTC One also seals in the battery, as does the iPhone. The "design goals" referred to may be about encouragement to upgrade to a new model as  the battery fades rather than go to the trouble of getting Samsun, HTC One of Apple technicians to change the battery for you -- at a price. Maybe some design goals are achieved coincidentally but I view it as built-in obsolesence and don't like it.
Reply  |  Post Message  |  Messages List  |  Start a Board

0%
JasonL804,
User Rank: Apprentice
5/8/2015 | 7:44:28 PM
Re: Pending Review
Much as we all love design, and quick charge,, the fact of the matter is batteries wear out. They wear out even faster with quick charge, and for someone such as myself who often buys devices second hand to avoid contracts, I have to deal with poor treatment and overnight, overcharge batteries that don't last. Being able to swap out and have a good as new phone is crucial. So while your patting yourself on the head for your great argument as usage of the word moot, many of us all rely on replaceable batteries for reasons other than convenience.
Reply  |  Post Message  |  Messages List  |  Start a Board

I hate this concept of sealing up the battery entirely. I get that it makes phones sleeker and thinner or whatever design cues that manufacturers are trying to make with this.

The problem is that batteries almost never last the two years of a contract lifecycle, which makes these devices really bad about a year and six months in – it's horrible.
Reply  |  Post Message  |  Messages List  |  Start a Board

I do miss the days of ripping the battery out when there was a problem, or replacing it with a bigger capacity to get a longer charge. It made things so much easier and meant that you had a bit more of a say in how your phone operates.

It feels like we're gradually moving further into Apple's ideals of the closed, inoperable cosystem.

2 years ago when I got my s4, I learned that it was wireless charging ready. This meant I could bit an overpriced battery cover from samung and an over priced charging pad... Instead, I shopped around found the electronics to be inserted under the existing back, and 2 inexpensive Qi charging pads. This ran me over $100 and I thought it very worthwile. Last week I picked up my s6, with built in wireless charging. Went back online and found charging pads starting at around $5 if you are willing to wait for Hong Kong shipping, $7 if you want it a little quicker from a domestic seller. I bought 3 more, at a fraction of what I originally spent to get started. With 5 of these around the home and office topping off through the day is painless. (I'm even thinking about the console of the car.) As wireless power become ubiquitous, which I think it will despite apple ignoring this trend, I see less dependence on giant or removable batteries.
Reply  |  Post Message  |  Messages List  |  Start a Board
Editors' Choice
Hot Topics