[2 UPDATES] Google must actually be afraid of Windows Phone, Windows 8 and the Microsoft services associated with them. The threat these pose to Google is serious enough that it doesn't just ignore Windows 8/Phone, but take active measures to make them less usable. The market will speak on this before the FTC gets a chance to deal with it.

Update: We have learned more about the behavior of Google mobile sites in various web browsers. See additions below in context.

Update 2: We have learned that our first update was based on misinformation. More below:

As I said above, Google's level of hostility to Windows 8 and Windows Phone is striking and I have to think that they see it as a serious threat. Microsoft is trying to offer all the same services that Google does, while offering access to Google's. This is what the little guy does, and Microsoft is ironically the little guy in this market. Perhaps if they were big and dominant they'd be jerks too.

But as a consumer, I want the most access I can get on whatever device I have. For now, Microsoft is providing access to its services for Android and iOS users better than Google and Apple are providing to Microsoft services. One day, if there are enough Windows 8 and Windows Phone users, Google may have to change its tune. 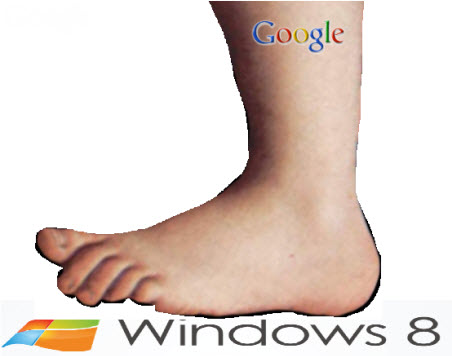