50%
Tweet
The $3.2 billion deal represents one of Google's largest acquisitions

Making a major bet on the "Internet of Things" and on the value of connecting with customers beyond mobile phones and tablets, Google on Monday said it has reached an agreement to acquire Nest Labs, maker of well-regarded network-connected thermostats and smoke detectors, for $3.2 billion.

That's $100 million more than the company paid in 2007 for ad network DoubleClick, arguably the company's most financially meaningful transaction. Nest Labs becomes Google's second most expensive corporate purchase (or third if inflation is taken into account). Its $12.5 billion deal for Motorola Mobility two years ago was its most expensive acquisition.

Google has been on something of a buying binge lately. It disclosed the purchase of eight robotics companies in December and has acquired two companies so far in January, the other being mobile app maker Bitspin.

Google CEO Larry Page welcomed Nest founders Tony Fadell and Matt Rogers in a Google+ post. "It's amazing to see how they have taken important but unloved devices and made them beautifully simple and useful," Page said. "We are excited to bring great experiences to more homes in more countries and fulfill their dreams!"

[Are Internet of Things devices the next big thing? See 10 Wearables To Watch At CES 2014.]

In his introduction of the Nest Protect smoke detector last October, Fadell said, "It's time to love your smoke and carbon monoxide alarm." That may be overstating the case for consumers, who, if not besotted, at least no longer have to hate smoke detectors for chirping low-battery warnings in the dead of night.

But for Google, love is in the air, specifically in the network signal that carries data to and from customer homes. This is a deal about expanding Google's relationship with customers in what it calls the multiscreen world and expanding its reach into new products.

Forrester analyst Frank Gillett in an email said the Nest acquisition "affirms the growing strategic importance of the idea of the Connected Home."

"I see this as a way to understand Google's ambitions for serving individuals beyond mobile," Gillett said in a phone interview. "It's not just about mobile data. It's about understanding what it takes to support products like Nest's." 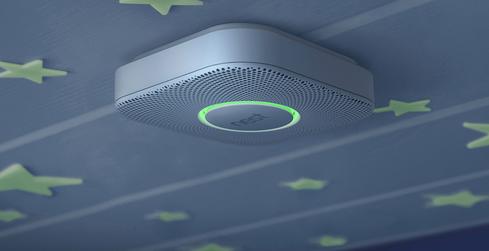 Gillett suggested that networked home appliances would work well with a service like Google Now, which could automatically ready a home for its owner's return. However, he characterized Nest as a long-term bet for Google, noting that Forrester data indicates only 8% of people use home automation products. The industry is still in its early stages, he said.

That's hasn't dampened industry enthusiasm. At CES 2014 last week, Cisco CEO John Chambers extolled the "Internet of Everything," which he insisted will be "bigger than anything that's ever been done in high tech." He predicted the networking of everyday objects will generate $19 trillion in new revenue by 2020. And that's to say nothing of the potential windfall for security companies that attempt to ameliorate the insecurity of everything.

This marks Google's second attempt to insinuate itself into utility monitoring. In 2009, the company launched Google PowerMeter through its philanthropic arm, Google.org. The plan was to partner with local utilities to provide customers with online displays of their energy usage data, to help with energy conservation. But few utilities wanted to participate, perhaps worried about ceding their customer relationships to Google. Also, integration with third-party hardware proved difficult. The service was retired in 2011.

Gillett observed that the deal underscores Google's growing commitment to building its own products, like Apple, as opposed to building operating systems for Android and Chrome OS hardware partners.

Apple's resurrection following the return of Steve Jobs in 1997 and its subsequent prosperity remains the most compelling argument for controlling both software and hardware. Larry Page is said to have admired Jobs, and in Fadell he gains an executive who helped steer the development of Apple's phenomenally successful iPod.

When Page took over as CEO in 2011 he said, "All of us at Google want to create services that people across the world use twice a day... just like a toothbrush!" Given the scope of the company's acquisitions and interests -- from robots to automated cars to home appliances to mobile and wearable computing devices to ads -- Google customers will be brushing constantly.

I think the point of Google's acquisition is not about smoke detector but for IoE. The company targets to produce the IT product that's essential for everybody's daily life. It's a great vision and strategy - as a high-tech company, the ultimate goal is transforming geek's toys into commodity.
Reply  |  Post Message  |  Messages List  |  Start a Board

I still think it's a long way from producing successful Web services based on software, such as Search and Google Maps, to providing devices that happen to use software. The mindset is different. Apple under Jobs was unusual in its ability to combine software and hardware in a vertically integrated stack, up to and including the network. It's also different in that as a company culture, it thinks, lives and breathes consumer device design. Google doesn't. Smaller firms may repeatedly flank it as it tries to enter these consumer markets. Amazon has the same problem, when it comes to devices.
Reply  |  Post Message  |  Messages List  |  Start a Board

Interesting point, Tom, from Gillett, who observed that the deal underscores Google's growing commitment to building its own products, like Apple, as opposed to building operating systems for Android and Chrome OS hardware partners. Intresting to think about the hardware portfolio Google has assembled, from Motorola smartphones, to Boston Dynamics robots, to Nest -- and how Google plans to build on them.

L. Page is saying: "All of us at Google want to create services that people across the world use twice a day... just like a toothbrush!"

As long Google doesn't expect us to use the smoke detector twice a day, I'm all for this acquisition, but $3.2 billion? Wow!
Reply  |  Post Message  |  Messages List  |  Start a Board

For those without a Comcast provider nearby, Comcast is tring to get in on the Home Automation. They already provide security services, but now they are linking lights, video camera and more to be controlled or viewed remotely through an app.

I don't have it, but it sounds like the home automation is being pushed by multiple vendors. Maybe this will lower prices and this will become more prevalent in homes.
Reply  |  Post Message  |  Messages List  |  Start a Board

I'm wondering if there's a link between the robotics buys and that of NEST. It doesn't take much of a stretch to imagine robotics that are triggered by certain environmental conditions. Maybe a roving dehumidifier air freshener for something really simple.
Reply  |  Post Message  |  Messages List  |  Start a Board
Editors' Choice
Hot Topics