Android 6.0 will be making an appearance on two new Nexus phones and a Pixel tablet.

At a media event in San Francisco on Tuesday, Google announced two Nexus phones, Android 6.0 Marshmallow, its Pixel C Android tablet, and two Chromecast devices, one for video and the other for audio.

"In most of these cases, these are people who are adopting a smartphone for the first time," said Pichai.

The Nexus 5X, made by LG, runs on a Snapdragon 808 processor (1.8 GHz hexa-core 64-bit). It includes a 5.2-inch FHD LCD (1920 x 1080) screen and a USB 3.0 Type-C port, which has the virtue of accepting compatible cords in any orientation. It comes with 2GB of RAM, a 12.3-megapixel rear-facing camera, a 5-mexapixel front-facing camera, a fingerprint sensor called Nexus Imprint, and a 2700mAh battery. The phone is available in charcoal black, quartz white, and ice blue.

[How will we connect tomorrow? Read 8 Smart Cities: A Peek at Our Connected Future.]

Both phones can be pre-ordered today and are expected to ship soon. 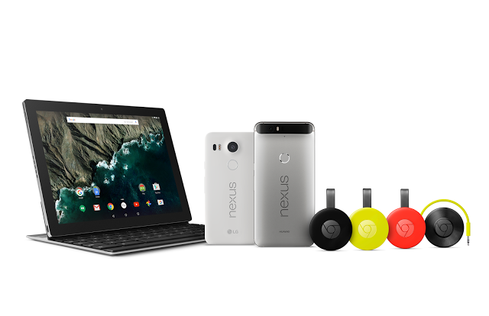 LG and Huawei have a tough act to follow. Apple said on Monday it had sold more than 13 million iPhone 6 and 6S models over the previous three days, a record for the company.

Google's Pixel line began as a touch-enabled Chrome OS notebook in 2013, with an updated version released earlier this year. Unlike Nexus devices, which identify a hardware partner, Pixel devices carry the Google brand. To date, they've served as luxury proof-of-concept devices, rather than products intended for mass distribution.

The goal of the Pixel team, said Pichai, "has been to build aspirational devices, so they can guide the ecosystem into new areas."

The Pixel C -- "C" stands for "convertible" -- is an Android-powered tablet with a 10.2-inch (2560 × 1800) screen and a detachable keyboard. It's Google's answer to Microsoft Surface. It relies on an NVIDIA X1 quad-core processor, a Maxwell GPU, and 3GB of RAM. Like other devices introduced at the event, it includes a USB 3.0 Type-C port.

Google redesigned its Chromecast streaming video device with a more flexible form factor, making it easier to connect in tight spaces. It features faster WiFi, a smarter antenna, and an improved app for Android and iOS. The updated Chromecast comes in three colors (black, lemonade, and coral) and is available today in 17 countries. The price remains $35.

According to Mario Querioz, VP of product management at Google, more than 20 million Chromecast devices have been sold since mid-2013. As a point of comparison, Apple CEO Tim Cook said in January that Apple had sold 25 million Apple TV devices. But Chromecast's affordability may help Google catch up. The latest Apple TV starts at $149.

Google expanded its Chromecast line with Chromecast Audio, a $35 wireless receiver to connect speakers and stereo systems to music on other devices, and via streaming services like Google Play Music, Pandora, and Spotify.

Android 6.0 Marshmallow, available next week as an OTA update to Nexus devices, brings a handful of significant changes to the Android ecosystem. The app permission system has been streamlined to request permission when necessary, rather than when an app is launched. Fingerprint reader support has been standardized, allowing developers to add fingerprint authentication to their own apps. Chrome Custom Tabs allow customizable Chrome windows to be opened atop an active app. They allow a better user experience than shifting to the separate Chrome app.

The update also integrates Android Pay to provide fingerprint-enabled mobile payments. It also brings charging and battery management improvements (such as Doze mode), and navigation refinements that allow URLs to take visitors to the publisher's app, instead of asking how to handle the link.

Google Now, the company's real-time assistance service, has been enhanced to make inferences about queries more effectively. It is now available in about 100 other apps under the name "Now on Tap."

Another particularly compelling Marshmallow feature is Auto Backup for Apps, which periodically backs up the data and settings associated with apps to the user's Google Drive account. The files must be 25MB or less, but it works even for apps that were not installed through Google Play. These files don't count toward the user's storage quota, and they are encrypted.

Thomas Claburn has been writing about business and technology since 1996, for publications such as New Architect, PC Computing, InformationWeek, Salon, Wired, and Ziff Davis Smart Business. Before that, he worked in film and television, having earned a not particularly useful ... View Full Bio
We welcome your comments on this topic on our social media channels, or [contact us directly] with questions about the site.
Comment  |
Email This  |
Print  |
RSS
More Insights
Webcasts
Protecting Your Enterprise's Intellectual Property
5 Steps to Solving Modern Scalability Problems
More Webcasts
White Papers
Managing OTT Content Distribution in the Connected World
How to Compete in Financial Services IT
More White Papers
Reports
Building an Effective Cybersecurity Incident Response Team
Email Security Threat Report 2020
More Reports

I have a bit of brand loyalty too -- I thought I'd choose a non-Motorola phone when our last contract was up but ended up with Motorola again (thanks to a nicely priced promo). I hope you enjoy the new Note!
Reply  |  Post Message  |  Messages List  |  Start a Board

Funny - I just picked up the Galaxy Note 5 today. The Note 2 I had really started to act flaky so I need to do it. The Note 5 is AWESOME though. I walked into the VZ store determined to get something smaller than the Note 2 but this thing is just beautiful. After using a Note 2 the screen on anything smaller looks ridculous. So I gues I am a Samsung guy for another 2 years.
Reply  |  Post Message  |  Messages List  |  Start a Board

You might be very happy with a Nexus device. They offer a pure Android experience without the extra stuff carriers typically add to Android. I have only heard good things from longtime Nexus users. I have been impressed with the quality of the MotoX. It was very late getting Android 5.1, but that was Verizon's fault.
Reply  |  Post Message  |  Messages List  |  Start a Board

@shakern Interesting question... Because the support is directly provided by Google, could be similar to how windows looks for mew drivers when a new device is plugged
Reply  |  Post Message  |  Messages List  |  Start a Board

@shakeeb I've been using it for a while, its phenomenal for making a standard TV behave like a smart tv. You should research it, you'll be amazed
Reply  |  Post Message  |  Messages List  |  Start a Board

@program2000 I would definitly recomend a nexus phone... As mentioned here... No clutter, and you get Googles update as soon as they are available
Reply  |  Post Message  |  Messages List  |  Start a Board

@mejiac – Do you think a native android OS will have the drivers required for each of these devices?
Reply  |  Post Message  |  Messages List  |  Start a Board

@nasimson – I have to agree with you on this. Bloat wear consumes much space from your primary memory and impacts the performance of your device sometimes resulting in people hating the device.
Reply  |  Post Message  |  Messages List  |  Start a Board

@mejiac- I never thought Chromecast could really benefit someone, but I guess I'm wrong. I should trying using Chromecast.
Reply  |  Post Message  |  Messages List  |  Start a Board

@SunitaT – If you don't like the default launcher try changing it by installing a new launcher form Play store. There are plenty of simple launchers out there that you could use.
Reply  |  Post Message  |  Messages List  |  Start a Board
Page 1 / 3   >   >>
Editors' Choice
Hot Topics