A research project being developed by Google and others strives to teach computational thinking.

The goal of the project, explains Google Creative Lab executive director Steve Vranakis and project lead Jayme Goldstein in a blog post, is to create "an open hardware platform that researchers, developers and designers can use to build physical coding experiences."

Project Bloks is not yet publicly available. Vranakis and Goldstein say that they wanted to share details about the project before conducting further research later this year.

Through the Project Bloks website, Google is soliciting expressions of interest from educators, researchers, parents, hardware makers, and the press, in order to invite additional people to shape the project. 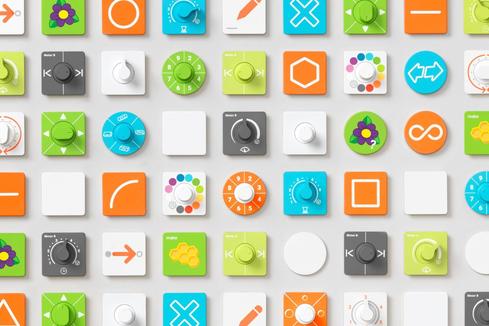 Together, these three components, in various combinations, can perform computing functions.

A Project Bloks video demonstrates how some students snapped together pieces of the Coding Kit to instruct a small robot to draw a series of squares, rotated around a point, on a piece of paper.

In a paper describing the goals of the initiative, members of the Project Bloks team argue, "computer programming is not simply a job skill, but a foundational literacy for everyone to learn."

The notion that coding is the new literacy has become a popular refrain in the technology industry. In 2013, for example, Code.org enlisted Microsoft chairman Bill Gates, Facebook CEO Mark Zuckerberg, Twitter cofounder Jack Dorsey, and various celebrities to urge young people to study computer science. This view has informed educational initiatives like the White House's Computer Science for All.

While there's little doubt coding ability can lead to a well-paying job, not everyone needs to understand the ins and outs of JavaScript or C. Students can learn computational thinking without necessarily becoming proficient at writing actual computer code.

Google's researchers in their paper acknowledge that there are already many tools for teaching the basics of software and hardware. They cite MIT's Programmable Bricks, Lego Mindstorms, Cricket, Pico Cricket, GoGo Board, Wiring, Arduino, and Phidgets. There are also commercial educational products like Little Bits and Snap Circuits for those who wish to explore the intersection of software and hardware.

As Google sees it, there are too many options, which is why it's developing Project Bloks as a new open platform. "The market is saturated with too many incompatible designs," the paper explains. "A platform would also address the problem of increasingly complex hardware and software, which is a barrier for new designers, especially if they want to focus on educational design, rather than the technical aspects."

Thomas Claburn has been writing about business and technology since 1996, for publications such as New Architect, PC Computing, InformationWeek, Salon, Wired, and Ziff Davis Smart Business. Before that, he worked in film and television, having earned a not particularly useful ... View Full Bio
We welcome your comments on this topic on our social media channels, or [contact us directly] with questions about the site.
Comment  |
Email This  |
Print  |
RSS
More Insights
Webcasts
Multi-Cloud Data Management for Modern Applications
Data Center Network Operations (NetOps) Reimagined
More Webcasts
White Papers
Protection Strategies for a Cyber-Resilient Organization
Cisco Secure Email
More White Papers
Reports
We Need Your Input: Trends in Workforce Optimization
Enabling Enterprise Resiliency Through Cyberthreat Detection
More Reports