50%
Tweet
Google joins Amazon in testing delivery drones outside the US, where regulations are less burdensome.

When Amazon CEO Jeff Bezos took to the airwaves last year to discuss Amazon's plan to deliver packages by drone, the company's plan looked more like public relations than a realistic roadmap.

Traditionally reserved Amazon appeared to be coming out of its shell to vie for mindshare as a technology leader alongside Google, a company that has gone to great lengths to present itself as an innovator and to shine a light on its moonshoot projects.

Now Google has revealed that it, too, has been testing drone-based delivery, and while its disclosure follows a similar script about a benevolent innovator -- the project's initial plan focused on delivering defibrillators to heart attack victims -- what's more noteworthy is the common villain for both companies: the Federal Aviation Administration.

[Is the Federal Aviation Administration too tough on drones? Read FAA Rules On Drones Vs. Model Aircraft Protested.]

As revealed in The Atlantic, Google's drone delivery program is called Project Wing. It has been running for two years out of Google X, the company's experimental technology group. Flight tests were conducted this month in Australia, because the country's regulations covering remotely piloted planes are more permissive than US rules.

"Australia has a long history of allowing civilian commercial use of UAVs so we were able to do many different tests and gather some great data about our technology, which was enormously helpful for this early-stage project," a Google spokesperson said in an email. 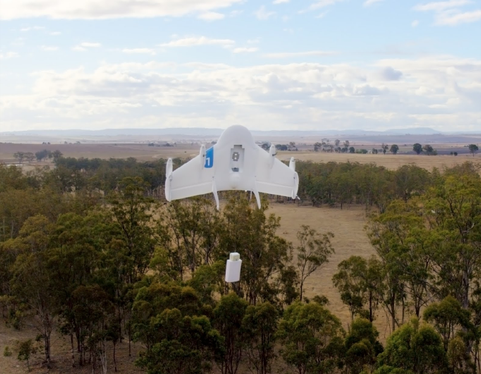 Google's explanation to the BBC put it more bluntly, describing Australia's regulations as "progressive." This suggests US rules are something other than that: backward, retrograde, or outmoded -- take your pick.

Dombroff adds that this isn't intended as criticism, as long as the FAA begins granting exemptions soon and publishes its rulemaking notice for small drones in the next few months. But it is criticism, nonetheless, just as Amazon's decision to begin testing drone deliveries in the Indian cities of Mumbai and Bangalore represents criticism of the FAA. Amazon and Google are voting with their feet, taking their tests to innovation-friendly countries.

The FAA is aware it has to revise its rules to reflect the fast-moving world of drones. In June, the agency approved the first commercial drone flight over land. But in moving slowly, the FAA is walking in step with the US public, which isn't nearly as keen to see drones buzzing about overhead as are Amazon, Google, and a host of drone-oriented startups. In April, a Pew Research study found that 63% of survey respondents think we'll be worse off if the FAA allows unmanned aerial vehicles to operate in commercial airspace.

This might explain why Amazon and Google have gone public with their aerial delivery plans: Talking about drones is necessary therapy for a nation that has spent the past 13 years focused on the threat posed by flying things rather than the opportunity.

Thomas Claburn has been writing about business and technology since 1996, for publications such as New Architect, PC Computing, InformationWeek, Salon, Wired, and Ziff Davis Smart Business. Before that, he worked in film and television, having earned a not particularly useful ... View Full Bio
We welcome your comments on this topic on our social media channels, or [contact us directly] with questions about the site.
Comment  |
Email This  |
Print  |
RSS
More Insights
Webcasts
Enterprise Database Strategies for 2020
Now That Ransomware Has Gone Nuclear, How Can You Avoid Becoming the Next Victim?
More Webcasts
White Papers
[Comparison Guide] Wired vs. Wireless LAN Solution
Special Report: Why Performance Testing is Crucial Today
More White Papers
Reports
How Remote Network Management Keeps the Business Running
The State of IT Operations and Cybersecurity Operations 2020
More Reports

I fully expect that as soon as a consumer drone is used to carry out an attack of some sort, we will start talking about GPS blackout zones and law enforcement will start pressing for technology to disable drones remotely (kill switches and counter-drone lasers). Drones are simply guided missiles without an explosive payload. They will be abused.
Reply  |  Post Message  |  Messages List  |  Start a Board

As a once very active licensed private pilot, I have watched the whole drone issue with more skepticism than most.  I also might add that I fly R/C planes and even quadcopters (sometimes mistakenly referred to as drones) with FPV (First Person View) video systems.  I have not, but plan to get into fully autonomous quad and hex copters which probably pushes it into the official "drone" category.

My concern and issue is that there is no monitoring or licensing of "drones".  Anyone with the money can go online (even to Google Shopping or Amazon) and purchase what could be classified as a "drone".

I routinely see guys at our local flying field that have no formal training or licensing but have no qualms with taking off and flying to altitudes of 2,000 -3,000 feet or more and 3 miles plus out from the field. All within a few miles of a major International Airport and a population center of now over a million people.  Again they do this with NO formal airspace knowledge or training and a disregard for safety (remember some birds brought down Sully's airliner in the Hudson a few years back).

As with any unregulated activity, it is always a few bad apples that cause the rest of us to suffer. Because we don't self regulate those few bad apples, someone else (in this case the FAA) will do so for us.
Reply  |  Post Message  |  Messages List  |  Start a Board

If we couldn't keep airliners out of the wrong hands on Sept., 11, 2001,, how on earth are we going to manage everyone flying their own drones? We'll issue licenses? We'll expect the FAA to approve only qualified applicants? Sound foolproof to me. Excuse the negative thoughts....
Reply  |  Post Message  |  Messages List  |  Start a Board
Editors' Choice
Hot Topics

IT Career Paths You May Not Have Considered Lisa Morgan, Freelance Writer,  6/30/2020
White Papers
[Comparison Guide] Wired vs. Wireless LAN Solution
6 Misconceptions About Collective Defense for Cybersecurity
Case Study: Tackling the Challenge Of Non-Employee Management
Online Traffic & Cyber Attacks During COVID-19
WFH Is Dead. Long live WFA. But What Does that Mean for IT?

More Informa Tech Live Events
Enterprise Database Strategies for 2020Now That Ransomware Has Gone Nuclear, How Can You Avoid Becoming the Next Victim?Why Performance Testing is More Critical Today