The familiar UI makes uploading music from iTunes and Windows Media Player a snap, but it offers fewer features than Amazon's Cloud Player.

Google announced its long-rumored cloud music service at Google I/O on Wednesday. Music Beta was available immediately to those registered at the conference. BYTE nabbed it and here's my hands-on preview of it.

Music Beta allows you to upload your music collection and stream it to and from any Web browser or Android-based device. It works a lot like the Amazon Cloud Player, launched in April, but sports a familiar user interface that makes it super easy to navigate.

After signing up for the service and downloading the Desktop Manager, Music Beta gave me the option to upload my music collection from iTunes, Windows Media Player, My Music, or other locations on an external or network drive.

It allows uploads of up to 20,000 tracks at any bit rate and supports MP3, WMA, M4P, M4A, and FLAC files, though it transcodes them to 320-Kbps MP3s. By comparison, the Amazon Cloud Player allows MP3 or AAC files only for playback. Amazon offers 5 GB of space free plus an additional 15 GB for a year if you buy an album from its store.

Many iTunes and Windows Media Player users are interested in backing up their music collections to the cloud, and Music Beta sure does make uploading your entire music library from either iTunes or Media Player simple. Once you select your music player, the tracks are uploaded and stored for later playback.

Though simple, in this early version I found uploading tracks to be slow and laborious. Adding just 194 MP3s from my iTunes collection took about five hours. Whether this is because of the early stage of code or many users from the Google conference hitting up the service at once is unclear. But it was slow.

Once your music is uploaded, the Web-based player is basic but intuitive and easy to use. It allows a number of ways to browse your library and create auto playlists. 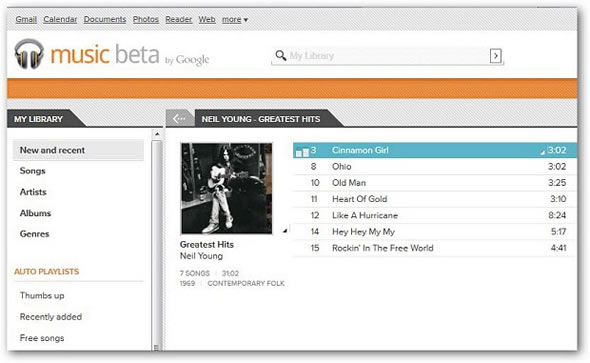 Music Beta features the standard playback controls, playlists, and an iTunes Genius-like feature that provides what it calls Instant Mixes. This will create a list of 25 songs similar to the one you select.

I wasn't able to get Music Beta to play on an iOS device with Mobile Safari. The player page displays, but no audio was available. However, it worked without a hitch on Research in Motion's BlackBerry PlayBook. There is, of course, an Android Music Beta player app.

Overall, Music Beta looks promising and is free for now. There's no word yet on pricing plans, but I'd expect it to be priced competitively with Amazon Cloud Player, which is free for 5 GB storage, $20 a year for 20 GB, and up to $1,000 a year for 1 TB. Now is a good time to check out Music Beta while it's still free. It's an invite-only beta, but you can request an invite from the Music Beta page.

If you want the ability to create your own digital jukebox in the cloud, the Music Beta by Google is definitely something to keep an eye on as the service grows and matures. So far, it features just a fraction of what the Amazon Cloud Player does--Music Beta only does music and has more restrictions for downloading songs--but as the system moves toward a final version, such features could, and are likely to, appear.

Brian Burgess is executive editor of BYTE, launching in July. Follow him @mysticgeek or email him at [email protected].

The Ever-Expanding List of C-Level Technology Positions Cynthia Harvey, Freelance Journalist, InformationWeek,  11/10/2020
White Papers
5 Key Steps for Assessing Your Security Effectiveness
Driving Immediate Value with a Cloud SIEM
Under the Hoodie 2020 Report
Securing Our Life on the Edge
The State of Global Phishing