50%
Tweet
Citing its high-end hardware, HTC says its new Droid DNA is the most advanced smart phone to hit the market yet, and the "ultimate" Droid.

With the flood of smart phones that have deluged the market toward the end of this year, it's getting harder for any one phone to distinguish itself -- barring maybe a new iPhone, and look how well that turned out.

HTC on Tuesday threw down a gauntlet that, if nothing else, has bravado going for it. At an event in New York it unveiled the Verizon-exclusive 4G LTE-connected Droid DNA, which it billed as "the most advanced smart phone on the market" and "the ultimate Droid." 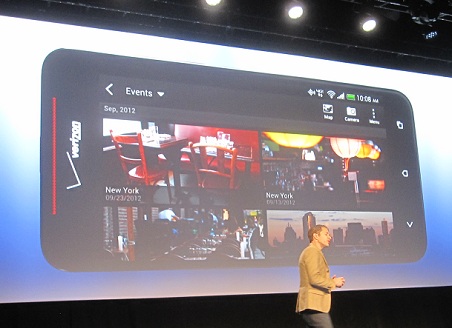 Their words, not ours. But the DNA, which was revealed earlier this month to be a U.S. version of the HTC Butterfly, has some chops to back up such a boast.

The DNA sports a 5-inch, full-1080p, 440-ppi screen, which runs to edge to edge and thus doesn't push the phone into full-blown phablet territory. Android 4.1 Jellybean drives the phone courtesy of a quad-core Qualcomm Snapdragon 1.5-GHz processor (the "Krait"), backed with 2 GB of RAM and 16 GB of internal storage. Front and back f2.0 cameras sport similar attributes to the optics found in the Windows Phone-powered HTC 8X.

HTC design director Jonah Becker used the DNA's physical specs to make side swipes at the Samsung Galaxy Note and Galaxy SIII lines, nothing that the DNA is slimmer than the Note and has a brighter display than the SIII. In addition to Beats Audio, a familiar presence on HTC phones now, the DNA also comes with the relatively unobtrusive Sense 4+ user-interface skin. Wireless charging also is included, for those who have the charging-pad hardware to support it, such as the Duracell Powermat.

We had the chance to try out the phone at the event, and were impressed with what we saw. The phone's polycarbonate plastic body is remarkably light and slender, without having the unpleasantly flexible feel of a low-grade phone. The display handles full 1080p content without smearing or blurring, and has the same strongly-defined color that we saw on the Motorola Droid Razr M. 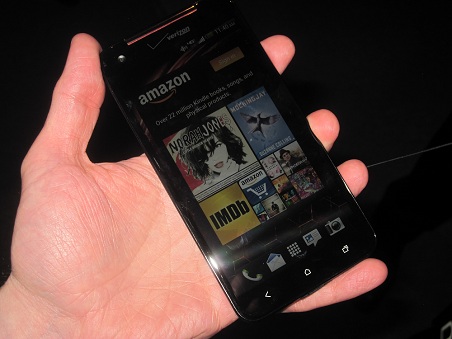 Motorola's earlier Droid phones, with their thicker profiles and slide-out keyboards, appealed to a slightly more professional market. The new Droid Razr M, though, is designed for the same market HTC has been targeting this year: people who want a powerful and good-looking phone, but want more lifestyle features than they do work-related functions.

Verizon is the exclusive U.S. dealer for the DNA, which will ship Nov. 21 at $199 with a two-year contract. Pre-sales begin Tuesday.