50%
Tweet
HTC's new Rezound focuses on multimedia; the take-it-to-work crowd may take it or leave it.

If you're going to bring your own device to work, you might as well make it one you can get the most out of when you're not working as well. Such seems to be the case with HTC's new Gingerbread-powered Android smartphone, the Rezound. 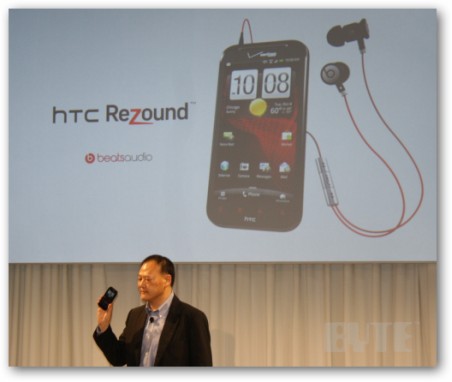 Music-industry movers and shakers Dr. Dre and Jimmy Iovine were on hand along with HTC and Verizon top brass -- including HTC's CEO, Peter Chou (pictured above) -- when they rolled out the new phone in a midtown New York City press event last afternoon.

The phone's 4G LTE chipset, 1.5 GHz dual-core processor, HTC Sense UI, 1GB RAM and 32GB of storage (16 internal, 16 external) weren't pushed nearly as hard as the 720p HD display, the improved camera with its F2.2 lens, and most of all its integrated Beats Audio sound system (Beats is Dre/Iovine's company), with Beats-branded earbuds in the box.

"Music is still the best app on the Internet, or on a phone," Iovine declared, "but now we have to bring the quality back." He lamented how music's sound quality has been compromised by digital compression and the quality of the hardware we use to play it back, and how Beats Audio was meant to address that issue. That said, most people have been more than willing to trade audio quality for portability. It's not clear the trend will reverse even if, for instance, Apple offers 24-bit lossless audio via the iTunes store as was rumored earlier this yearto be happening.

Reporters were given a chance to peek briefly at display models of the Rezound, plugged into oversized pair of Beats-branded headphones. The Beats ear buds packed with the phone also double as a headset for calls.

The Rezound will be available online, in Verizon stores and in Best Buy, starting November 14th for $299. Most visibly missing is Ice Cream Sandwich, although Jason Mackenzie (HTC's head of sales and global marketing) stressed that the phone was "Ice Cream Sandwich ready," which sparked more than a few rumbles of dismay throughout the audience. Sandwich should be delivered for the device "early next year."

HTC's clearly interested in lifestyle phones, as per their Rhyme smartphone (which was aimed mainly at women). This isn't to say the Droid Incredible or the HTC Thunderbolt were slouches -- they weren't -- but that with the Rhyme and now the Rezound, HTC is betting more directly on those who use their phones as entertainment and generic multimedia devices.

Without having a sample phone to put through its paces, it's hard to tell if the Rezound has the battery stamina to make it through a day of both conventional work and music on the go, though. There's a reason people still like having their music players and their phones separate -- especially if that phone's doing double duty as their work device. 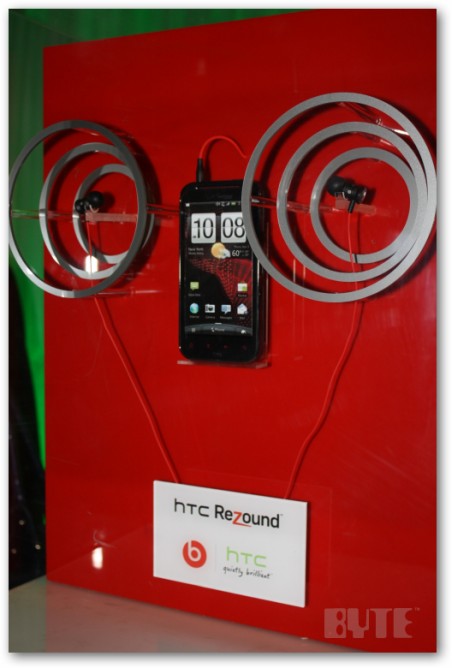