HTC's One M9 Debuts At MWC, But Fails To Excite - InformationWeek

50%
Tweet
HTC showed off the One M9 smartphone at MWC, but there was little buzz around the company's latest device. HTC is also branching out into wearables and virtual reality.

BARCELONA – HTC revealed the One M9 on stage at Mobile World Congress here on Sunday, March 1. The smartphone is HTC's third-generation One-branded handset, and it's the most capable version yet.

Not everyone is thrilled with the design, however, which HTC mostly carried over from last year's model. HTC hopes the old adage "beauty lies on the inside" applies to the One M9.

The One M9 looks strikingly similar to last year's One M8. It has an aluminum skin, a glass face, and some injection-molded plastic parts here and there. Everything about it is attractive, and there's no question it offers a premium experience. Where last year's phone was offered in dark gray, silver, and champagne, the new phone is offered in black, pink, champagne, and a silver/gold mishmash version. 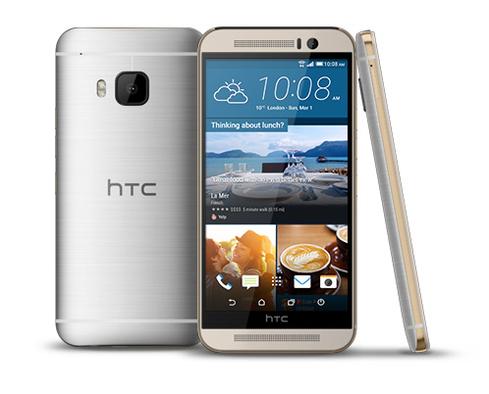 The HTC One M9 failed to excite the crowds at MWC in Spain.

The One M9 carries over the 5-inch full HD LCD panel, which looks great. Too bad HTC didn't step up to quad HD resolution, which LG, Motorola, and Samsung have done. The One M9 is elegant and refined; HTC didn't go cheap with the materials. If you were hoping to see something new, however, you might be disappointed.

The bigger story here is what's on the inside. The device trades in the Qualcomm Snapdragon 800 for the Snapdragon 810 processor. The 810 has an octa-core chip that offers plenty of horsepower. It has two banks of four processors: one running at 2.0 GHz for power-intensive tasks and the second running at 1.5 GHz to conserve energy. It is paired with 3 GB of RAM and 32 GB of storage.

The camera has been changed completely. The One M7 and One M8 both used 4-ultrapixel cameras. The One M9 changes out those sensors for a 20-megapixel sensor from Sony. It has an aperture of f/2.2, which isn't as competitive as it could be, but reverse-side illumination should help with low-light situations. It also has a sapphire lens and 4K video capture. The user-facing camera uses the 4-ultrapixel sensor. The big question is whether or not HTC can get the image signal processing right, something it has struggled with in recent years.

HTC made sure to include all the latest wireless radios, including LTE, NFC, WiFi, Bluetooth 4.1, GPS, and GLONASS. The One M9 can connect to multimedia equipment through DLNA, MHL, and Google Cast. There are a ton of sensors on board, including ambient light, proximity, accelerometer, compass, gyroscope, and magnetic.

The device looks good, but the buzz since the phone's announcement suggests people were hoping for more of a visual change compared to the One M8. The One M8 will be sold by all four major carriers in the US, but don't expect to see it in stores until about mid-April.

In addition to the smartphone, HTC showed off its first wearable, called the HTC Re Grip. It is a fitness band that has a touch display. It's powered by UnderArmour, which HTC partnered with just last month. The device is waterproof, works with Android and iOS, has GPS, and can record a workout (with GPS) up to five hours long. HTC says that's long enough for a marathon. The Re Grip will go on sale in the spring.

HTC did not disclose the price.

Last, HTC announced a new partnership with Valve, which is making a virtual reality headset for HTC. The headset will be compatible with HTC's handsets.

Is this phone worth the extra price (over what one would pay for the M8) just for a better Screen and a Nicer Camera?

I really don't think so.

I am not really one to knock someone down generally but for the Vast Majority of Smartphone users out there;this phone just won't cut it(at the Price which HTC will look to sell it initially).

Wait for 6 months instead and then buy the same phone for 30% Less(if not more)...

There is no real WOW! Factor in this phone.