Big changes could be in store for Windows Phone. Hot on the heels of claims that Microsoft has waived Windows Phone license fees for some OEMs, a Huawei executive, in an interview, revealed plans to launch a Windows Phone-Android hybrid smartphone later this year.

"We are still committed to making Windows Phone devices," Shao Yang, Huawei's CMO, told TrustedReviews.com in an interview published Wednesday. The executive countered, however, that Android devices are a higher priority, and that a "dual OS" strategy might be necessary.

"If it is Windows only, maybe people will not find it as easy a decision to buy the phone. If they have the Android and Windows together, you can change it as you wish and it is much easier for people to choose Windows Phone," he said, adding that Huawei will debut a dual OS device in the US in the second quarter.

[Check out what to expect in the newest version of Windows. See Windows 8.1 Update 1: 10 Key Changes.]

Yang didn't provide any additional details about the device. InformationWeek has reached out to Huawei for comment.

Dual OS prospects have attracted attention in recent months, as evidence mounts that future Windows 8.1 and Windows Phone devices could include access to Android apps. Intel introduced a chip optimized for such devices in January at the Consumer Electronics Show, including demonstrations of the Asus Transformer Book Duet TD 300, the first device to use the new processor.

Reports have since claimed that Google objects to Intel's dual OS plans, a contention about which Google, Microsoft, and Asus have all declined to comment. Asus still displays the Transformer Book, a laptop-tablet hybrid originally slated for release later this year, on its website.

Nokia, whose device business Microsoft is acquiring, also released its Nokia X platform last month at Mobile World Congress. Aimed at emerging markets, Nokia X offers an Android base with various Nokia and Microsoft services layered on top. Nokia CEO Stephen Elop, who will join Microsoft as part of the acquisition, said at the time that the devices would constitute a "feeder system" for Windows platforms. It remains unclear, however, if Microsoft will support Nokia X once its purchase has cleared. 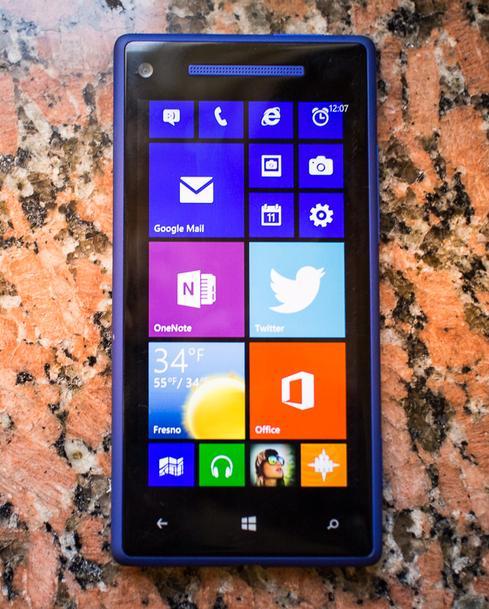 Other reports claim Microsoft sees Android apps as a potential catalyst for Windows and Windows Phone adoption. Both Windows 8.1 and Windows Phone have been criticized for their relative lack of apps. Research firm IDC projected last month that Windows Phone will capture only 3.9% of the smartphone market this year, and only 7% by 2018, when it will have roughly half the iPhone's anticipated share, and one-eleventh Android's. Gartner, another research firm, estimated earlier this month that Windows devices accounted for only 2.1% of the tablet market.

If Android could represent one way forward for Microsoft, a new licensing structure might represent another. With Windows platforms still far behind in the mobile race, many OEMs have turned to Android and Chrome devices for new business. Numerous reports over the last year claim Microsoft has discussed reducing or eliminating license fees to incentivize manufacturers to stick with Windows. The company has not commented on such reports, though it recently confirmed updates for both Windows 8.1 and Windows Phone will arrive this spring.

Michael Endler joined InformationWeek as an associate editor in 2012. He previously worked in talent representation in the entertainment industry, as a freelance copywriter and photojournalist, and as a teacher. Michael earned a BA in English from Stanford University in 2005 ... View Full Bio
We welcome your comments on this topic on our social media channels, or [contact us directly] with questions about the site.
Comment  |
Email This  |
Print  |
RSS
More Insights
Webcasts
Monitoring Critical Cloud Workloads
Multi-Cloud Data Management for Modern Applications
More Webcasts
White Papers
Top Serverless Security Risks and How to Mitigate
Ransomware Security Breach Summary: Food Production
More White Papers
Reports
Enabling Enterprise Resiliency Through Cyberthreat Detection
The Need for Speed: Second Generation EDR
More Reports

I can't see why a dual-boot phone would be useful beyond allowing Microsoft to include it in Windows Phone sales stats.
Reply  |  Post Message  |  Messages List  |  Start a Board

Great point, melgross. I'm hoping Huawei can clarify that for us. We asked them for comment this morning and were told we'd hear back-- but no word yet. I'll post an update when we have more information from Huawei.