Battery life is a major pain point of today's mobile electronic devices. Huawei has cooked up a new way to charge batteries, however, that could revolutionize how we use smartphones, tablets, laptops, and other battery-powered hardware.

The average smartphone provides about one day of battery life. There are exceptions in both directions, of course. Some handsets struggle to reach the end of the work day, while others will continue working through a second day. Total battery life will matter a lot less if you can charge your phone in five or ten minutes, which is what Huawei says it can do.

Huawei's researchers recently showcased new technology at the 56th Battery Symposium in Japan that can deliver a charge up to 10 times faster than what's available today. 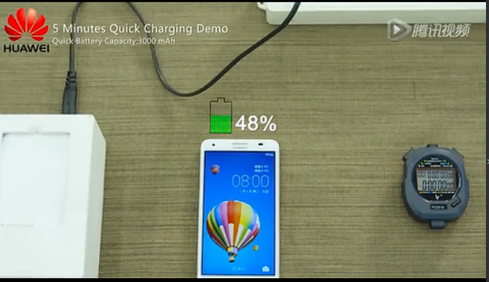 Specifically, Huawei claims it "bonded heteroatoms to the molecule of graphite in anode, which could be a catalyst for the capture and transmission of lithium through carbon bonds. The heteroatoms increase the charging speed of batteries without decreasing energy density or battery life."

In demonstrations, Huawei charged a 600 mAh lithium-ion battery from 0% to 68% capacity in just two minutes. It also charged a 3,000 mAh battery from 0% to 48% in five minutes. The ~1,500 mAh charge delivered to this second battery is enough to provide up to 10 hours of voice calls on Huawei handsets.

In these examples, the 600 mAh battery would be for a smaller device, such as a connected smartwatch, while the larger is more typical of a flagship smartphone.

Huawei isn't the only company hoping to charge up batteries swiftly.

If phones are able to suck in a 50% charge in just five minutes, most people won't have to worry so much about battery life.

Huawei's Watt Lab is working with industry partners to "pursue a new energy era." The Watt Lab's focus is on forwarding the technology behind energy storage. Huawei did not say how rapidly it will be able to bring this quick-charging technology to real-world consumer products, although it does claim the tech has been certified by Huawei's terminal test department. (In this case, terminal = cellphone.)

"Huawei is confident that this breakthrough in quick charging batteries will lead to a new revolution in electronic devices, especially with regard to mobile phones, electric vehicles, wearable devices, and mobile power supplies," according to Huawei. "Soon, we will all be able to charge our batteries to full power in the time it takes to grab a coffee."

I think this is something Haiwei can really put a mark on the mobile industry.  Other mobile manufactures are adding more memory, making screen bigger, while decreasing on battery life.  Something all users depend on while using newer smartphones.
Reply  |  Post Message  |  Messages List  |  Start a Board

@BillB031 I agree that some Chinese manufacturers are not trustworthy, but if we can not trust big brands like Huawei, Xiaomi or Lenovo; whom can we trust?
Reply  |  Post Message  |  Messages List  |  Start a Board


If this could be done it's a win for cell phones and a myriad of other battery centric devices. I too would be concerned about the impact to battery itself but if that's addresses this is an awesome breakthrough for so many!!!

External portable chargers are another one of those things that I wouldn't have given a second thought if it wasn't for my kids. They both have a couple, and I ended up latching onto one of them during a recent vacation. They are pretty impressive, so I will probably check this Huawei thing out...
Reply  |  Post Message  |  Messages List  |  Start a Board

@mak63, Yes, the external battery/charger have gotten very good.  I didn't know there was a solar product.  These external batteries charge a phone faster than the typical 2 amp wall charger while still powering  the phone during use.  The only down item is the time to recharge (8-10 hours from 0% to 100%) but the newer ones might be better these days as mine is a year old.

I don't think smartphone manufacturers had these in mind though when moving to non-replaceable batteries.  Most likely this was a pure cost savings play to them.

I'd say in the past most would upgrade the smartphone before the battery died but that hasn't been my experience.  My Galaxy Nexus and Galaxy III both needed a new battery replacement before the two year contract ran out.  I'm only into a year on my Note 4 and so far so good, so we'll see if its battery expires over the next 10 months but I'm very happy with this phone and don't see any current product available to make me want to upgrade.
Reply  |  Post Message  |  Messages List  |  Start a Board

I've learn the fast charge lesson the hard way with high end flashlights, electronic cigarettes & phones.  There is always the trade off of fast higher amp charging and running the batteries too low, as the life span can be cut significantly.  And I especially don't trust this chinese company to be truthful.  The number of re-wrapped and cloned batteries with exagerated specs coming out of china is mine blowing. What it comes down to, is they are telling you what you want to hear, and gladly take your money, but they never deliver what they say.
Reply  |  Post Message  |  Messages List  |  Start a Board

@ DDURBIN1 & Ashu001
Last week I bought one of those power pack, external battery. Pretty amazing little thing. It's also solar. I have two now. I carry, at least, one of them always with me.

I also have one of those phones with a non-replaceable battery. Perhaps manufacturers are thinking that we're gonna get a new phone, before the battery is gone for good. They might be right in some cases
Reply  |  Post Message  |  Messages List  |  Start a Board

I think smart and enlightened Consumers like yourself need to put more pressure on Companies(best way is to not buy phones which don't come with replaceable Batteries).

Eventually,the Consumer decides what works and What does'nt in the larger scheme of things.If he/she feels something does'nt make sense to him/her they should clearly stop buying those products.

@Ashu001, with the industry move to non-replaceable batteries the need for quicker charging becomes more important which is why I don't understand putting non-replaceable batteries in smartphones.  Even if they charge quickly they eventually sooner or later stop holding charges.  The track record has been sooner.  I'll have my Note 4 for a very long time me thinks.
Reply  |  Post Message  |  Messages List  |  Start a Board

@Technocrati,  I never use the replacement battery.  Instead I have an 10KmAh external battery.  The replaceable battery is a replacement for when the battery won't hold a charge any longer and needs to be disgarded.  Sadly, most high end smartphone now come with a perminent non-replaceable battery.
Reply  |  Post Message  |  Messages List  |  Start a Board
Page 1 / 3   >   >>
Editors' Choice
Hot Topics