IT Change Control: 8 Ways To Improve Your Processes
(Click image for larger view and slideshow.)

At a media event in San Francisco on Tuesday, Intel announced the availability of its 6th-generation Intel Core vPro processors for businesses and presented its case for buying them -- something fewer people are doing than in years past.

PC sales during Q4 2015 declined 10.6% year-on-year, according to research firm IDC. Last year was the first year since 2008 that PC sales figures dipped below 300 million units. Among the top PC makers, only Apple saw its sales figures grow.

Intel's pitch to businesses involves a carrot and a stick. The carrot in this case is the promise of business transformation, which essentially means using IT more productively. Intel claims that its latest Core vPro processors offer 2.5 times better SYSmark 2014 performance than a comparable 5-year-old PC, the age at which many businesses consider hardware replacement.

Yet this figure also hints at why PC replacement may have slowed. A decade ago, under Moore's Law, the doubling of transistor densities every 18 months brought comparable speed increases and price decreases. When it takes 60 months to see PC speed increase by a factor of 2.5, while transistors become more expensive, the industry dynamic is clearly changing. It's tempting for businesses to maintain PCs because the new hardware just hasn't left old hardware far enough behind, even if the cost of maintaining old PCs can be considerable.

There's more to PC replacement than CPU gains, of course. Intel's current reference platform for tests includes an Intel solid state drive, while its five-year-old model includes an unspecified 500GB hard drive. This alone makes the company's new model PC far more responsive than older models that rely on spinning disks for storage. Businesses that replace HDDs in their PCs with SSDs, without any CPU upgrade, can still experience the transformative power of employees made giddy by computers that boot in seconds rather than minutes. 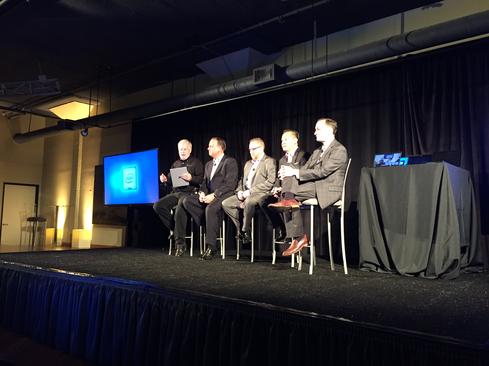 But Intel has software to support its exhortation that businesses upgrade their computers with Core vPro silicon. The company has updated Intel Unite, its conferencing connectivity software for hastening conference room utilization. During the event, Sean K. O'Farrell, Eli Lilly's director of digital workplace services, described the challenges of connecting devices to conference room displays when there are so many different types of connectors and adapters.

"We saw the Unite product and it was sort of like the clouds parted and the ray of sunshine came down," said O'Farrell, noting that he expected Eli Lilly's conference room utilization, along with the rooms themselves, would become more intelligent through the deployment of Unite and compatible devices.

So much for productivity as the proverbial carrot. Intel's stick is security. The company's event opened with a panel discussion lamenting the sorry state of computer security at enterprises and smaller businesses. Computer security has been underwhelming for the past decade or two, but the proliferation of mobile devices and the advent of the Internet of Things has multiplied the surface area for potential attacks. Now that executives are losing their jobs over breaches, the panelists suggested, business leaders are more willing to invest in security.

Intel's focus is on the primary attack vector, identity. Citing figures from Verizon, Jack Gold & Associates, and the Ponemon Institute, the company notes that companies face 117,000 identity attacks per day, that 50% of all breaches are tied to credential theft, and that the average estimated breach cost to a company is about $20 million. 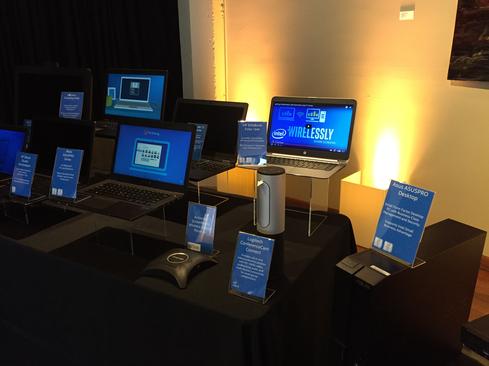 Tom Garrison, vice president and general manager of Intel's Business Client division, demonstrated how Intel's Core vPro chip line allows authentication without a password through a fingerprint scan paired with proximity check based on the presence of the user's phone. The death of the password, long foretold, may finally be at hand.

To hear O'Farrell tell it, Eli Lilly users prefer this sort of multifactor authentication scheme to passwords. Between lust for productivity and fear of a hacked planet, Intel may see PC sales become a bit more lively this year.

Thomas Claburn has been writing about business and technology since 1996, for publications such as New Architect, PC Computing, InformationWeek, Salon, Wired, and Ziff Davis Smart Business. Before that, he worked in film and television, having earned a not particularly useful ... View Full Bio
We welcome your comments on this topic on our social media channels, or [contact us directly] with questions about the site.
Comment  |
Email This  |
Print  |
RSS
More Insights
Webcasts
Unifying Your Endpoint Security Strategy
Fact or Fiction? The Truth About Cloud Native Security
More Webcasts
White Papers
The 2021 Small and Midsize Business Security Outcomes Study
Why DLP Has Failed and What the Future Looks Like
More White Papers
Reports
Why You're Wrong About Operationalizing AI
2021 Digital Transformation Report
More Reports