A report from McKinsey and the Global Semiconductor Alliance finds excitement and uncertainty among companies building the pieces of the Internet of Things.

The Internet of Things (IoT) may be the sum of smart devices, but it doesn't necessarily add up for companies creating IoT technology.

A report released this month by McKinsey & Company and the Global Semiconductor Alliance (GSA) found that semiconductor executives had mixed opinions about the potential of IoT, which is widely seen as a source of growth for a broad set of technology companies.

The IoT, as defined by McKinsey and the GSA, refers to sensors that communicate over the Internet without human intervention. That definition includes wearables and smartphones, both of which communicate autonomously if allowed. It also includes smart devices for cars, homes, and cities, and for healthcare and industrial equipment.

Looking ahead, the benefits and growing ubiquity of connectivity appear likely to make "smart" the default for objects of significant value. Perhaps the term will even disappear as it becomes the norm, to be replaced by "dumb" (or something less pejorative like "silent") for those rare instances when objects can't communicate.

But several challenges may delay that future, and the McKinsey/GSA survey sees six obstacles of note.

1. Security and data privacy. "Overall security is only as good as its weakest point," said one executive interviewed for the report. Certainly weak points are abundant on the Internet today.

This explains why Samsung spent considerable effort at the recent Internet of Things World conference emphasizing the presence of Secure Element hardware in its new ARTIK line of IoT modules.

The automatic communication of IoT devices makes privacy more difficult by encouraging a usage pattern where communication consent is given in advance, rather than at a contextually relevant moment.

2. Customer demand. At least in the consumer market, the report anticipates that the IoT market will grow through a variety of applications, rather than via a single killer app. The report advises that semiconductor companies help developers create compelling IoT products and guide businesses with an interest in IoT deployment.

Part of the problem is that IoT products may be more interesting to their makers -- by providing companies with data and customer engagement -- than to customers. Users of IoT devices need to be able to derive real, repeatable benefits from the technology, or they just won't bother with it. 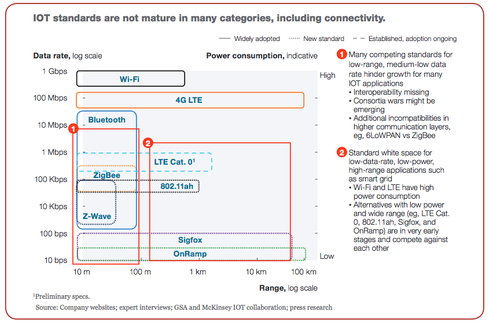 3. Limited consensus on standards. This lack of standards is particularly the case among emerging protocols with low-power consumption like LTE Cat.0, 802.11ah, Sigfox, and OnRamp. The report suggests that chipmakers hedge their bets until there's more clarity.

4. Market fragmentation. The diversity of IoT applications means no single chip is likely to be suitable for all applications. Such fragmentation represents a concern because it limits economies of scale, thus raising production costs. The report recommends that chipmakers focus on silicon that can serve multiple markets -- an approach Samsung has taken with its three distinct ARTIK modules.

5. Elusive new revenue sources. Perhaps the most intriguing aspect of the report is the finding that semiconductor companies are looking beyond silicon manufacturing for profits. Many of the companies interviewed are looking to add value at multiple layers of the technology stack, through software, security, and systems integration. IoT appears to be a ladder up the value chain.

6. Technology shortcomings. Finally, while two-thirds of survey respondents expressed confidence that IoT technology is where it needs to be to thrive, another third suggested that reduced power consumption would stimulate demand for IoT devices and applications.

The Internet of Things is here, but it may take some time to figure out which side is up.

Does Identity Hinder Hybrid-Cloud and Multi-Cloud Adoption? Joao-Pierre S. Ruth, Senior Writer,  4/1/2021
White Papers
From MFA to Zero Trust
5 Reasons to Protect your VPN with Multi-Factor Authentication
The Impact of the SolarWinds Breach on Cybersecurity
Simplify Your Application Security
Dark Reading Report: Battle for the Endpoint