Apple's iOS and Google Android own a combined 96.3% of the global smartphone market, leaving a pittance for Microsoft and BlackBerry.

Microsoft and BlackBerry lost ground during 2014 to Apple's iOS and Google Android, which together dominate the smartphone industry. Android tightened its grip on the smartphone crown with shipments more than five times greater than those of Apple's iOS.

Apple, in turn, enjoyed shipments more than five times greater than those of Microsoft's Windows Phone platform. The race for third place is hardly a race at all.

Android had a darned good year in 2014, according to research firm IDC. The platform saw shipments breach the one billion mark for the first time. Android vendors pushed out 1.059 billion smartphones, a 32% jump from the 2013 shipments of 802.2 million. Samsung remained the leader in Android shipments, but those remained flat as low-cost vendors chewed up its marketshare in the entry-level segment. In total, shipments of Android devices account for 81.5% of the market, up from 78.7% the previous year. 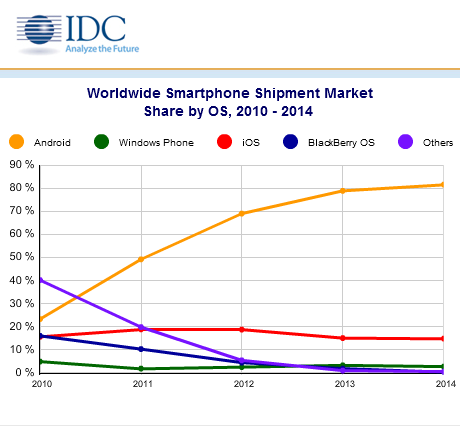 "A combination of strong end-user demand, refreshed product portfolios, and the availability of low-cost devices -- particularly for Android -- drove volumes higher," Ramon Llamas, research manager with IDC's Mobile Phone team, wrote in a Feb. 24 statement. "What will bear close observation is how the two operating systems fare in 2015 and beyond. Now that Apple has entered the phablet market, there are few new opportunities for the company to address. Meanwhile, Samsung experienced flat growth in 2014, forcing Android to rely more heavily on smaller vendors to drive volumes higher."

Together, Android and iOS accounted for 96.3% of all smartphone shipments during 2014.

That left Microsoft, BlackBerry, and other phone makers scrapping for the remaining 3.7% of the market.

IDC says Microsoft's Windows Phone platform saw the smallest year-over-year growth rate since its release. Microsoft (and Nokia) shipped 34.9 million Windows Phone devices during 2014. That's up just 4.2% from the 33.5 million shipped in 2013. Windows Phone lays claim to about 2.7% of the global smartphone market. Microsoft relied mostly on low-cost Lumia phones to generate the bulk of its shipments for the year. The company hasn't introduced a true flagship smartphone since the 2013-era Lumia 1520. Microsoft is clearly waiting until Windows 10 is available to bring out new and engaging hardware.

[ Read about mobile apps and how vulnerable they are. ]

BlackBerry brings up the rear and is the only one of the major smartphone vendors to see a decline year-over-year. The company shipped 19.2 million smartphones in 2013, but only 5.8 million in 2014. That's a drop of 69.8%, giving it a 0.4% share of the market. While BlackBerry did spend much of 2014 rebuilding its software and services, it brought the Passport and Classic to market. Neither has sold as well as the Z10, Z30, Q10, or the Q5 did in 2013.

"Instead of a battle for the third ecosystem after Android and iOS, 2014 yielded skirmishes, with Windows Phone edging out BlackBerry, Firefox, Sailfish, and the rest -- but without any of these platforms making the kind of gains needed to challenge the top two," IDC analyst Melissa Chau, wrote in a statement.

Eric is a freelance writer for InformationWeek specializing in mobile technologies. View Full Bio
We welcome your comments on this topic on our social media channels, or [contact us directly] with questions about the site.
Comment  |
Email This  |
Print  |
RSS
More Insights
Webcasts
Securing and Monitoring Networks in the 'New Normal'
Strategies for Success with Digital Transformation
More Webcasts
White Papers
The Value of Threat Intelligence
The Trouble with Phishing
More White Papers
Reports
Special Report: Edge Computing: An IT Platform for the New Enterprise
How IT Security Organizations are Attacking the Cybersecurity Problem
More Reports

I've been saddened to see Blackberry take such a plunge, however, it really is its own fault by not keeping up with the times.
Reply  |  Post Message  |  Messages List  |  Start a Board

Microsoft will let pass this year that's for sure. Windows 10 could come to the rescue soon. Let's not forget that Microsoft has plenty of money available to do something about it. Not sure what really. Perhaps ads? Pay developers to make more apps?
Reply  |  Post Message  |  Messages List  |  Start a Board

How many years can Windows Phone survive as a flat line?
Reply  |  Post Message  |  Messages List  |  Start a Board
Editors' Choice
Hot Topics