iPad May Get Split-Screen Multitasking In iOS 9 - InformationWeek

Apple is preparing some long overdue features for the iPad and may launch them on larger iPad Pro tablets later this year. This relates back to functionality in the upcoming iOS 9.

Apple's annual Worldwide Developer Conference is just over the horizon and is already shaping up to be an exciting leap forward for iOS, iPads, and iPhones. In addition to potential new HomeKit home automation powers, Apple has some surprises in store for its iPads that will push them to the forefront when it comes to productivity.

Apple's iOS devices have never been all that good at multitasking, or effectively using two applications at the same time. iOS supports fast-app switching, which lets users jump between suspended apps, but it's not quite the same as dropping two apps next to one another on the screen.

iOS 9 may change that.

Apple is hard at work on a dual-app viewing mode for the iPad, reports 9to5Mac. Its sources say Apple originally intended to add the feature to iOS 8, but it wasn't polished enough come iOS 8's release in September 2014. The multitasking feature is now on deck for iOS 9, and Apple may reveal it at WWDC on June 8.

Samsung, Apple's foremost competitor, has offered split-screen multitasking on its handsets and tablets for years. It is an incredibly powerful tool, especially when it comes to handling documents, emails, Web browsers, and messaging apps. 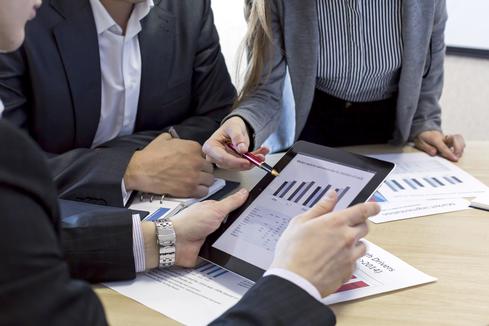 On Samsung devices, the split-screen mode is dynamic. Users can adjust how big the window is for each app using a slide bar. That's not how it will work on the iPad.

Apple is preparing iOS 9 apps to function in three different view sizes: One-third screen, one-half screen, and two-thirds screen. 9to5Mac suggests users will be able to run two apps side by side in combinations of these three sizes, so allowing users to pair a one-third window with a two-thirds window or pair two one-half windows on the screen. Think about how useful it could be to view two open Safari tabs at the same time, or have your email running next to Microsoft Word, and so on.

Split-screen multitasking -- a feature users have been begging for -- could be a real game-changer for the iPad.

Apple has another highly-requested feature on deck: Support for multiple user logins.

On today's iOS devices only one account can be used per device. In a family setting this can cause problems among users who prefer different wallpapers or font sizes, or want different apps and media installed. Support for multiple logins is a long overdue feature that Apple needs to address, especially considering Android has included this ability for several years.

It wouldn't hurt Apple to add a Kid Mode, too, which could put parents' minds at ease that Junior won't accidentally email the boss instead of playing a game or watching a video.

In addition to the changes to iOS 9, Apple has new tablet hardware in the works.

Now, a larger version of the iPad has been rumored for quite some time. In March, the Wall Street Journal said the device had been pushed back to September. 9to5Mac's sources say there are two jumbo tabs awaiting production, the J98 and the J99. These are 12-inch versions of the iPad Air 2. Suspected hardware features include stereo speakers and broader support for USB input devices. The hold-up isn't the hardware, however: It's the software.

[Read about IBM, iPads, and Japan.]

Apple is adjusting iOS to take advantage of the extra screen real estate. In addition to split-screen multitasking, it is exploring redesigns of core features (think Siri and notifications) to work better on the bigger display.

None of this may come to pass. Apple may not wrap up the split-screen tool in time for iOS 9's initial debut. Apple might not be able to finalize the iPad Pro's software before the fall, and Apple may not make big-screened iPads at all.

Apple will provide at least a glimpse of these possibilities come WWDC in early June.