6 comments
Comment Now
With the arrival of the iPad Pro, the tech world is talking about enterprise tablets. Which model is best for you? 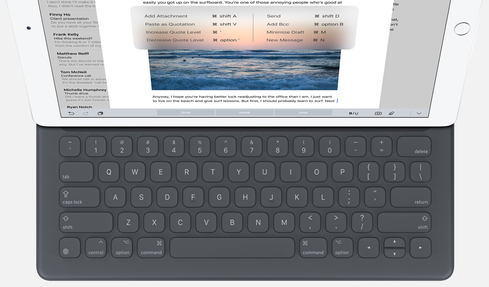 Apple, as per usual, created a beautiful design for its iPad Pro. The enterprise-focused tablet is a larger version of the iPad Air 2, with a 12.9-inch display and resolution of 2732 x 2048 pixels. It measures 6.9mm in thickness and weighs 1.57 lbs.

Its larger screen is intended to provide more space for business documents, charts, graphs, and presentations. The display is made more useful by the multitasking capabilities in iOS 9, which lets users split the larger screen among multiple apps.

Other noteworthy features include Apple's new A9 64-bit processor, which is reportedly 1.8 times faster than the A8x chip in its iPad Air 2, and 4GB RAM. A smart keyboard, which doubles as a device cover/keyboard combo, and Apple Pencil are two Apple-designed accessories intended to help the iPad Pro become more of a laptop replacement.

The first major pain point of the iPad Pro is its battery life, which maxes out at 10 hours for surfing the Web on WiFi, watching video, or listening to music. This drops to nine hours for Web browsing on a cellular data network.

The iPad Pro is undoubtedly a beautiful and powerful device, but will it boost productivity enough to justify its cost?

For the price range we are in with these devices a smarter decision might be to consider a very high end laptop. You will get better ergnonomics, better performance, more screen realestate, longer battery life, and better connectivity with far more IO options. It would be a system you might be able to use all day long at a desk. You can buy a very capable laptop when you get in the $1000 plus ranges.

Tablets are good for mobile use, but why bother with an expensive one? I would use them as a "secondary device" for mobile communications needs. Don't spend more than a couple hundred dollars on one. They are not worth the investment. I see people hunched over them for hours on end, it is funny to watch them use these devices at their desk or in a meeting--squinting at the little screens and plugging away trying to provide input through a lame little keypad. In a few years they will have strained necks and cripppled bodys for sure from using a device that affords little in the way of ergonimics. The keyboards on these devices are sorry excuses for input devices. Tablets are throw away devices, don't overspend on them.

The best business tablet is a $150 secondary device, which provides a reasonable mobile experience and can be tossed after a year or two of use.
Reply  |  Post Message  |  Messages List  |  Start a Board

Having used or currently using a Surface Pro 2, a Surface Pro 3, an iPad Air 2, an iPad Mini, a Galaxy Tab 2, and a Dell Venue 8 Pro (along with looking at many other tablet offerings), I feel that simply reading a vendor's spec sheet doesn't give the whole story.

In the case of a Surface Pro 3, it's excellent graphics, ability to use bluetooth devices (e.g. mouse and keyboard), and USB adaptor make it the first choice for most Windows-centric shops.  However, cranking up the processor (I have the I7 in mine) reduces battery life to the point where some laptops outlast it.  Another concern is Microsoft's apparent backpedalling of a touch interface with Windows 10.  With Win 8.1 there was at least a reason to consider a touch interface.  Now, not so much.  The MS keyboard is a non-starter for pretty much anyone that relies on a keyboard for much of their work.  The reason?  No Insert key (which also means no type-over key), something that at least I find I need to use every day (and trying to use the .  The hidden gem?  OneNote.  Definitely one of MS's best software offerings to date.

Apple has long been the "master" of the touch interface.  Give a 3-year-old an iPad and they are able figure out how to get around in no time.  I've never seen the same level of aptitude gained so quickly on a Windows device.  However, their drawback has always been the touch interface.  For people with bad circulation (cold fingers), people that work with their hands (mechanics, cooks, or anyone else that ends up with "stuff" on their fingers), and - on occasion, people that have large hands (moreso an issue on the iPad Mini) the touch interface is not a viable solution.  Apple's finally acknowledging that a stylus (pencil) may be beneficial is a step in the right direction.  To those that say an Apple device cannot be part of a network, they're simply wrong.  My iPad has full access to my company's network.  True, it cannot "see" shared Window's drives, but that's solved with applications like OneDrive (another good MS product).  The ability to do split-screen (which seems to only work with certain apps so far) is something that was way overdue.

Dell's Venue 8 Pro (not mentioned in the article) is actually a dark horse in this race; a 32-bit processor and a battery that lasts all day running Windows 8.1 or 10.  The 8 Pro is a phenomenal value for non-business use (if you consider the cost of both a Windows OS and Office Home & Student license it's almost like getting the hardware for free).  It can also take a 128GB MicroSD card (although you cannot map OneDrive to it).  Dell also routinely runs bundled sales making the deal even better.  The 10 Pro boasts a larger screen (and a 64-bit processor), but not a bundled Office license (which may be better for many businesses).  I have not tried out a 10 Pro, but I suspect you'll find it's numbers (and battery time) comparable to a Surface Pro 3.

Going with any Android device really depends on a company's environment.  Like an iPad, they don't seemlessly integrate into a Windows world.  However, OneDrive is also available (making drive mapping a non-issue) and for the most part network connectivity is a non-issue (not sure if Cisco ever ported over an "official" version of their AnyConnect product for VPN access).  Any one of the Android devices mentioned (as well as the 10" version of the Dell 7000 series) could be a viable contender, - especially if the company is using Google Docs.

In the end my company's choice was the Surface Pro 3.  Why?  Because we wanted to standardize on a 64-bit version of Windows, take advantage of Active Directory, and (probably the biggest decision factor) have business relationships with both Microsoft and HP (which pretty much took Dell out of the picture - much to my chagrin).  That, and the head of our hardware group has a strong dislike for all things Apple.

Do I like my Surface Pro 3?  Absolutely!  Do I like my iPads?  Most definitely!  Do I like my Venue 8 Pro?  Certainly!  Which do I recommend?  It all depends.  In today's world there is no longer one clear solution.
Reply  |  Post Message  |  Messages List  |  Start a Board

If the tablet can not join the domain it is of no use in the Enterprise. Windows is the only option.
Reply  |  Post Message  |  Messages List  |  Start a Board

I use the Surface Pro 3 everyday for work. I have it docked when I am at my desk and I can take it with me wherever it is needed. I upgraded to Windows 10 a couple of weeks ago and it has performed flawlessly. Very stable, very secure, and runs all of the software I need, Windows Store apps and Win32.

Kelly, it is clear to me that the iPad Pro is way better than the Surfice Pro 3. The iPad Pro not only has a better camera and resolution, more sensors, and option to include cellular data; it has its compatible smart keyboard and Pencil. The 10-hour battery life last more than the 9-hour battery the Surfice Pro 3 has. The iPad Pro's design is much better, more beautiful that the Surface Pro 3, this includes better materials in the hardware manufacturing. iOS 9 is way better than Windows 10. For those who prefer an OS that doesn'r crash every day causing hundreds of problems and waste of precious time there is no point of comparison. I don't understand why you say the iPad Pro's price tag is a downside but you don't say the same about the proce of the Surface Pro 3. The difference between both 128GB modeles is only $50, and the Surface Pro 3 doesn't have the software stability and security the iPad Pro has. -Susan
Reply  |  Post Message  |  Messages List  |  Start a Board

...but if it doesn't have a command line, why bother?
Reply  |  Post Message  |  Messages List  |  Start a Board
Editors' Choice
Hot Topics