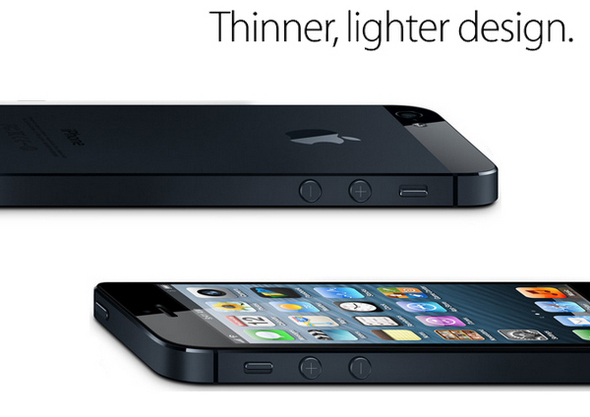 Those blurry images of mysterious iPhone 5 prototypes were mostly spot on. Apple's 6th-generation handset is indeed slimmer and taller than its predecessor. Sheathed in an aluminum and glass exterior, the new iPhone is 7.6 millimeters thick, out-slimming the Huawei Ascend P1 by 0.09 millimeters--not that you'd notice. The iPhone 5 weighs 112 grams (3.95 ounces) and is 18% thinner and 20% lighter than the iPhone 4S. One way Apple trimmed the fat was by embedding touch electrodes between the Retina display pixels, resulting in a 30% thinner display. The iPhone 5 also uses a nano-SIM card, which Apple says is 44% smaller than a micro-SIM. However, the new iPhone is nearly 9 millimeters longer than its predecessor.

iPhone 5 Will Save The World: Analysts

Comment  |
Email This  |
Print  |
RSS
More Insights
Webcasts
5 Steps to Integrate SAST into the DevSecOps Pipeline
Linking, Orchestrating, and Managing Your Enterprise Security Systems
More Webcasts
White Papers
Using AI to Power AppSec
NetFlow vs Packet Data
More White Papers
Reports
Can You Spare 10-12 Mins to Help Us Out with a Survey on Tech Trends?
Got 7 Minutes? Dark Reading Needs Your Help With Our Survey on Incident Response
More Reports