The iPhone 5s and iPhone 5c show that while Apple's rivals have caught up on the technical side, Apple has continued capacity for design innovation. 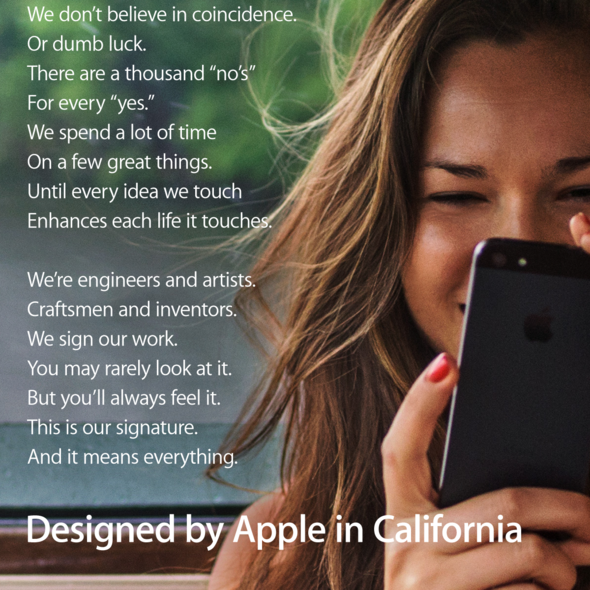 Apple is betting big on design. With two new iPhone models, the elegant iPhone 5s and the whimsical iPhone 5c, each sporting a flat, rainbow-hued software interface that breaks with past versions of iOS, there's no missing how important design is to the company. Thick fonts have been starved into thinness. Textured backgrounds have become flat. Icons rendered with reflections and shadows have been redrawn as pencil sketches.

Not that design hasn't always been a major point of differentiation for Apple, but its importance has been magnified as the mobile market and mobile product lines have matured.

In 2007, Steve Jobs, then Apple's CEO, introduced the first iPhone by calling it "a revolutionary and magical product that is literally five years ahead of any other mobile phone."

Jobs was more or less right. But more than six years have passed and the competition has caught up, at least from a technical perspective. Back then, it was revolutionary and magical to have a phone that also worked well as a portable Internet-connected computer and as an iPod music player. Today, it's mundane. What once was revolutionary is rapidly becoming a commodity, at least in the U.S., Europe and mature Asian markets like Japan.

Apple has fought to protect its turf in court and prevailed against Samsung, the leading Android handset maker, in closely watched patent litigation last year. Microsoft has also sought a share of Android's success (and the advancement of its own Windows Phone platform) through patent claims, and it has obtained licensing agreements with Android handset makers.

But legal victories haven't slowed Android's momentum significantly. Google recently said it has activated more than one billion Android devices. Apple CEO Tim Cook couldn't quite match that, noting that by the end of the month Apple expects to have sold more than 700 million iOS devices. Unit activations, of course, don't tell the whole story: Apple earns far more from its phones than do its competitors. But that's unlikely to last.

Confronted with technology that's more or less as good as its own, Apple in June doubled-down on design because it's hard to copy and it can be protected with design patents. At its Worldwide Developers Conference, it launched an ad campaign under the tagline "Designed by Apple in California."

The ads have been poorly received. Ace Metrix, a media consulting firm said in July that one of the spots in the campaign, "Our Signature," scored 489, less than the industry average of 542 and significantly less than Apple's 2011 average of 614 for iPhone ads. Because Ace Metrix doesn't disclose specifics about how it evaluates ads, the figures should be viewed with some skepticism. But the firm's overall assessment bears consideration, particularly because it is not alone in its criticism of Apple's design-centric pitch.

But the devices that Apple is marketing are more compelling than their advertisements. The iPhone 5s looks great, runs fast, sports a new operating system and generally has a lot going for it. The camera alone is probably worth the price of the device. And the iPhone 5c recalls the old candy-colored iMacs that revived Apple as a company in the 1990s. They may help bring some fun back to a company that has been dealing with the loss of its visionary co-founder, a decline in stock valuation, the challenge of developing scalable cloud services, labor issues at its manufacturing partners, and investor pressure for another blockbuster product line.

Take a look and decide for yourself. Then share your thoughts in the comments section.