Apple is set to show off the iPhone 6s on Sept. 9. This year's device may pack a heavier punch than previous "S" models.

Apple has invited media to attend an event in San Francisco on Sept. 9. The event will herald new iPhones, a new Apple TV, and potentially new iPads. Apple typically updates its iPhone designs every other year in a "tick-tock" pattern. The "tick" years represent full redesigns, while the "tock" years focus on improving specs and performance.

However, this year's "tock" might strike harder than in year's past.

All the "S" models were modest upgrades to the previous year's original design. For example, the 3GS had a better camera and more storage than the 3G, while the 4s made another camera improvement and improved the processor and data speeds compared to the iPhone 4. The big change in the 5s was the fingerprint reader, which the iPhone 5 lacked.

Here we are in another "S" year and already there is plenty of chatter about what to expect in the iPhone 6s. 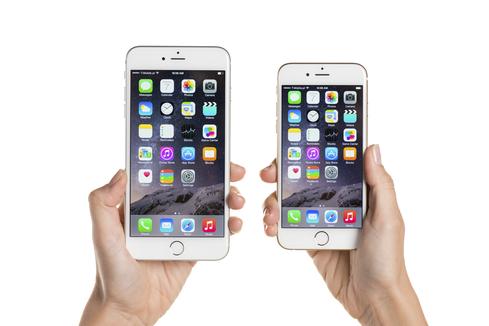 The design of the smaller iPhone 6s and larger 6s Plus is to remain unchanged from a visual perspective when placed side-by-side with last year's iPhones. Apple is believed to be using stronger aluminum, however, to resolve the "bendgate" problems that surfaced with the iPhone 6 Plus last year.

Apple is expected to give the camera a significant boost. iPhones have had 8-megapixel cameras since the iPhone 4s.

This year, the camera may jump to 12-megapixels and bring with it 4K video capture at 240 frames per second. Android handsets have long offered 4K video capture. What's not clear is if Apple will add optical image stabilization (OIS) to the iPhone 6s. Last year's 6 Plus included OIS, but the smaller 6 did not. Given that most competing handsets now include OIS, it's time the 6s had it, too.

It would be really nice if Apple upgraded the FaceTime camera. People the world over have taken to including themselves in photos. The iPhone's selfie cam is decent, but could be better with respect to aperture and angle of view. There's some talk that Apple may surprise us by adding a flash on the front.

As usual, Apple will jump to a next-generation processor called the A9. What's not clear is how much storage the iPhone 6s will have. The entry-level iPhone 6 has just 16GB of internal storage, which is meager at best. It leaves hardly any room for movies, music, photos, and apps. Most competing flagship smartphones have at least 32GB of storage, and many also support expandable memory cards. Apple needs to increase the storage for the least-expensive model.

One of the more important updates to the 6s/6s Plus will be Force Touch technology.

Force Touch lets the Apple Watch and MacBook differentiate between gentle taps and more forceful presses. Much of what makes Force Touch work will be buried in iOS 9, the new operating system set to debut alongside the new iPhones. Developers have so far been mum on what they're doing to add Force Touch to their apps, but the technology could herald significant change in how we interact with iPhones moving forward.

These may not seem like hefty updates, but taken together they add up to a more compelling update than previous "S" generations. What's on your iPhone 6s wish list?

Apple is also believed to have a new Apple TV on deck for its Sept. 9 event. It's less clear when Apple may show off new iPads. For a long time, the iPad Pro was expected to arrive during the Sept. 9 event, but now it looks as though the product won't ship until the fourth quarter. Apple may wait until October to reveal it.

Eric is a freelance writer for InformationWeek specializing in mobile technologies. View Full Bio
We welcome your comments on this topic on our social media channels, or [contact us directly] with questions about the site.
Comment  |
Email This  |
Print  |
RSS
More Insights
Webcasts
Optimizing App Performance in the Cloud
Strategies for Success with Digital Transformation
More Webcasts
White Papers
Why Add Security to Your Skill Set and How to Do It
How Hyatt Eliminated Bot Attacks Without Impacting their User Experience
More White Papers
Reports
Building the SOC of the Future
How Data Breaches Affect the Enterprise (2020)
More Reports

I think the internal storage baseline should be upgraded to at least 32GB, especially for the device like iPhone, which has no possibility to do extension via external SD card.
Reply  |  Post Message  |  Messages List  |  Start a Board

@kootenayredneck I read that the prices for the new iPhone 6s have been leaked. Unfortunately (?) they will remain the same here in the US; most likely in Canada as well.
Reply  |  Post Message  |  Messages List  |  Start a Board

Stronger Aluminum. I think Apple realized at some point that it would be better to have a stronger chassis on the iPhone 6. If this rumor turns out to be true - and I think it is true - it will give iPhone 6s users more confidence that their iPhone 6s will not bend when they put them in their skiny jean pockets and sit down. As smartphones get thinner and thinner we don't want to wonder if it will bend.

Better Camera System. The 's' versions of iPhones have historically improved on the camera. But adding pixels don't necessarily mean improvement. I would like to see even bigger pixels that capture more light, rather than more pixels. Although the iPhone 6 (and 6 Plus) is very good at taking photos in any situation there is still much work to be done for taking photos in low-light environments. I hope Apple sticks to 8MP and continue to improve the backend as well as the lenses (faster lens at f/1.8 please). Oh, and OIS on the iPhone 6s too. The 'selfie camera' needs to be upgraded too: wider viewing angles.

16GB --> 32GB. iOS 9 will be bigger than iOS 8, I think. And that means upgrading to iOS 9 on a 16GB iPhone will be problematic. (Remember 16GB iPhone users not being able to upgrade to iOS 8 because of a lack of storage.) Apple will need to find a way to upgrade to iOS 9 piecemeal until a majority of iPhone users are on iPhones with 32GB or more. So I hope Apple will up the baseline storage to 32GB.

ForceTouch. I think this will be great for gaming. Tap hard for a big super-duper punch. Other than games, I don't have a lot of ideas. What do you think ForceTouch can be used for?
Reply  |  Post Message  |  Messages List  |  Start a Board

Earlier this year we saw the Apple Watch finally become available...and that was about it.

I've honestly haven't heard that much hype. Granted the functionality are phenomenal, so the prospects of implementation are still in diapers.

I'm really wondering how will Apple continue to providea consolidated ecosystem with all it's devices.

Many of my co-workers are huge apple fans, and have iphone, macs and apple watch. It's actually pretty cool they way they are able to have everything in sync (althought I'de go cracy when a reminder goes off on your phone, your mac and your watch all at the same time during a conference meeting.... then only "snoozing" one of them and then the others starts chiming again 15 min later)

There's a lot of hype on the new Iphone. I got the Iphone 6 fresh of the press, and don't have any complainst (aside from some apps not being compatible at first).

I normally wait 2 to 3 years before upgrading, mainly since I like true upgrades, and not just an incremental bump on a feature or two.

For this new round for Iphone, we're seing the normal upgrades (better processor and camera), but there's buzz that they might implement force touch technology. As before, I think this paves the way for further improvement. Developers will definitly seek ways to include the new feature as part of there apps.

Sure hope so. Just looked at a friends  iPhone 6 Plus. Really wish Apple had'nt taken so long in bringing it out. Just trying to pin down how much the new one will cost in Canada.
Reply  |  Post Message  |  Messages List  |  Start a Board
Editors' Choice
Hot Topics

CRM Trends 2021: How the Pandemic Altered Customer Behavior Forever Jessica Davis, Senior Editor, Enterprise Apps,  2/18/2021
White Papers
Why Add Security to Your Skill Set and How to Do It
Accelerate Threat Resolutions with DNS
Protection Strategies for a Cyber-Resilient Organization
How Hyatt Eliminated Bot Attacks Without Impacting their User Experience
Sunburst: Impact and Timeline