iPhone 6S and 6S Plus and iPad Pro were among the products getting their big reveal at Apple's San Francisco shindig Sept. 9. But the real excitement lies in Apple's vision for the future of TV. 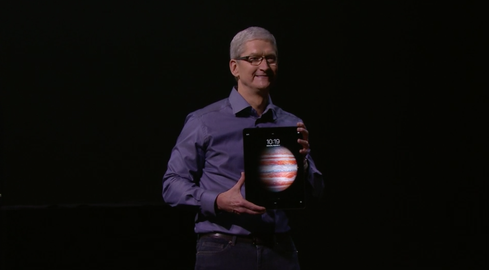 Apple unveiled the iPhone 6S, iPhone 6S Plus, and iPad Pro, along with a new smartphone pricing plan, during its Sept. 9 media event in San Francisco. But the company's CEO Tim Cook reserved his greatest enthusiasm for Apple TV.

In 2007, Apple TV was, as then-CEO Steve Jobs put it, "a hobby." Sales were modest and the company hadn't figured out how the device fit into its overall business strategy.

In San Francisco on Wednesday, Cook demonstrated a clearer vision for the device. "Our vision for TV is simple and perhaps a little provocative," said Cook. "We believe the future of television is apps."

Google thought so too when it introduced Google TV in 2010. But that didn't go so well and the company tried again with Android TV last year.

Apps may be the future that companies in the apps business want for TV, but major content makers have been wary about becoming another app among the millions. The future of television appears likely to include apps, but it will also include content providers negotiating deals with the likes of Apple and Google that protect their interests and their brands.

The new Apple TV is supported by an iOS variant called tvOS. Similar to watchOS, it will allow Apple's 11 million registered developers to create apps -- games, entertainment, shopping, or otherwise -- that run on Apple TV devices.

Apple's vision should appeal to professional content makers. The company's control over its app ecosystem makes monetization easier. Cook emphasized this point. "Over 60% of paid TV streaming is consumed on an Apple device," he said.

The updated Apple TV features a redesigned interface that supports both voice navigation and touch navigation, via Apple's renovated Siri Remote. The remote control can also function as a game controller, a user-experience enhancement that should increase the appeal of apps on the TV screen.

As anticipated, Apple announced the iPad Pro, a tablet with a 12.9-inch screen designed to take advantage of new multitasking features in iOS 9. The iPad Pro features an A9X processor that, according to Phil Schiller, senior VP of worldwide marketing, performs 1.8x faster than the A8X chip in the iPad Air 2, and 2x faster for graphics.

"It's faster than 80% of portable PCs that shipped in the last 12 months, 90% for graphics," said Schiller.

The speed is necessary not only to drive the console-quality games destined for the iPad Pro, but for professional applications, such as 3D4Medical's Complete Anatomy, which place high demands on hardware.

The iPad Pro includes four speakers that generate audio output far louder than the iPad Air 2. It also supports the new Smart Keyboard ($169) and Apple Pencil ($99). The iPad Pro is scheduled to ship in November. It starts at $799 for the 32-GB with Wi-Fi model and $1,079 for the Wi-Fi + cellular 128-GB model.

New iPhones debuted as well, the iPhone 6S and iPhone 6S Plus. Acknowledging the challenge of creating excitement around a device that looks the same as last year's model, Cook said, "While they may look familiar, we have changed everything about these new iPhones."

That may be a bit of an exaggeration, but the changes are deep enough to sustain the interest of potential Apple customers. Apple's latest iPhones can read the force of a touch event, through a sensor technology the company calls 3D Touch. It allows new modes of navigation and interaction -- Apple calls them Peeks and Pops, and yes those terms are trademarked -- in apps that implement support for 3D Touch.

The iPhone 6S and 6S Plus both include a 12-megapixel iSight camera and a 5-megapixel FaceTime HD camera that can illuminate its screen to improve selfie lighting. They also capture 4K video and suppport Live Photos, an Apple imaging format that captures still images in series and animates them as if they were frames in a short (3 second) video. WiFi and LTE speeds have been improved as well.

Preorders for Apple's latest iPhones open on Sept. 12, with availability planned for Sept. 25. The iPhone 6S starts at $649 and the iPhone 6S Plus starts at $749. Apple is also offering the devices on a monthly installment plan, starting at $27/month and $31/month respectively. In addition, the company's new iPhone Upgrade Program provides a way to pay monthly installments and to receive a new model iPhone every year.

Read on for more about the new devices, then tell us what you think in the comments section below.

>After all this time, I guess I'm surprised that Apple still sees itself as a PRODUCT company first

Hardware is Apple's defense against competition. Apps can be copied. Google Maps, meet Apple Maps. But only Apple can authorize OS X/iOS apps that run on its devices. And only Apple can dictate which apps come preloaded on its devices.
Reply  |  Post Message  |  Messages List  |  Start a Board

@Jastroff Ah, you only say that because you have not been absorbed by the Apple fan borg.
Reply  |  Post Message  |  Messages List  |  Start a Board

@jastroff I think that's just the way people view things; they see more obvious value in products than in services because one is concrete and the other is not.
Reply  |  Post Message  |  Messages List  |  Start a Board
InformationWeek Is Getting an Upgrade!