Apple unveiled smaller versions of the iPhone and iPad Pro, iOS 9.3, new Watch bands, and updates on sustainability and health during a March 21 event.

Apple captured the tech world's attention and imagination March 21 with another one of its signture press events. Monday's main event at the company's Cupertino, Calif. headquarters unveiled, as predicted, a new iPhone, iPad Pro, Apple Watch bands, iOS 9.3, and updates to tvOS.

"Let us loop you in" said the invitation Apple sent to attendees in early March. The cryptic message was tougher to decipher than "Spring Forward," which marked the invitations for its Apple Watch event one year ago.

CEO Tim Cook closed the event by mentioning it would probably be the last in the Town Hall theater at the company's Cupertino, California headquarters, which also hosted the iPod launch. In 2017 and beyond, announcements will take place at the new "spaceship" campus. Perhaps the invitation's message was a reference to Apple's current address, One Infinite Loop.

Prior to today's event, the rumor mill churned with predictions of products and services we'd see unveiled. A smaller and cheaper iPhone SE, iPad Air Pro, and iOS 9.3 were among the most popular expectations and all took the stage. Let's take a closer look at what was unveiled.

Cook kicked off the event by reminding the audience how Apple, which turns 40 this year, will not back down in its legal battle with the FBI.

"The iPhone is an extension of ourselves," he emphasized. "We need to decide as a nation how much power the government should have over our data and our privacy."

COO Jeff Williams followed to discuss the evolution of ResearchKit and launch of a new initiative called CareKit, an open-source framework for building apps to help people be more proactive about their health. One app, for example, lets patients record health stats after surgery and share it with a doctor to create more personalized recovery plans.

Next up was Apple Watch. Cook noted one-third of Apple Watch owners regularly change their Watch bands, a segue into his announcement of new band colors for Apple Watch Sport and new woven nylon Watch bands. The cost of Apple Watch is also dropping to a starting price of $299, he continued.

[Apple Watch turns one: What has changed in a year?]

In an update available today, Apple TV is getting new features including Siri for the App Store, Live Photos, access to iCloud Photo Library, and the option to organize apps on the home screen. Dictation makes it easier for users to enter text onscreen. 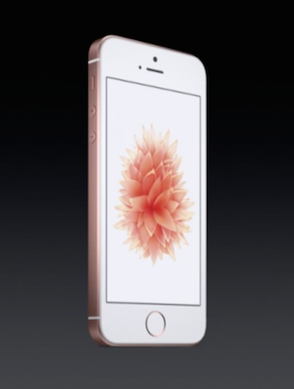 The iPhone SE has a 4-inch screen and aluminum casing. It comes with a 64-bit A9 chip and integrated M9 motion coprocessor, so you can say "Hey Siri" to prompt the digital assistant. It has a 12MP camera, 4K video recording, TouchID, Secure Enclave, and NFC for Apple Pay.

Joswiak also demoed the new features in iOS 9.3, the latest version of iOS, which is available for download today.

These include Night Shift, which automatically shifts the iPhone's lighting to warmer tones toward the end of the day. The idea is to make the lighting more natural, since the blue light typically emitted by iPhones can interfere with sleep quality.

Other updates include the ability to protect Notes with a fingerprint passcode, app suggestions to bring more data into the Health app, updates to music and apps for CarPlay, and the ability to browse top stories and editor's picks in Apple News. 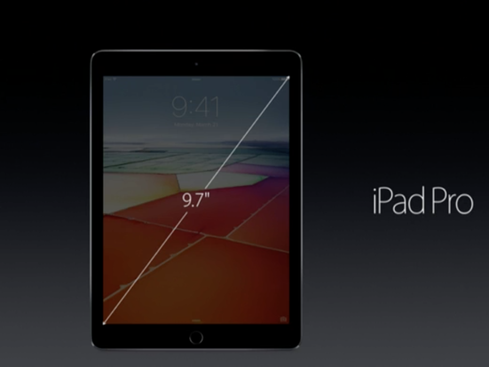 The last product announcement was a new iPad Pro with a 9.7-inch screen, weighing in at less than one pound. It's a more compact version of the massive 12.9-inch tablet introduced last year.

The iPad Pro screen is 40% less reflective than the iPad Air 2 display, 25% brighter, and promises lower reflectivity. A new TrueTone display uses sensors to detect the ambient color temperature, and shifts the display to match.

Apple is marketing the iPad Pro as the next step for Windows PC users. Over 600 million PCs in use today are over 5 years old, said Phil Schiller, Apple's SVP of marketing, and many people who would switch to iPad Pro are coming from a Windows device.

Kelly Sheridan is the Staff Editor at Dark Reading, where she focuses on cybersecurity news and analysis. She is a business technology journalist who previously reported for InformationWeek, where she covered Microsoft, and Insurance & Technology, where she covered financial ... View Full Bio
We welcome your comments on this topic on our social media channels, or [contact us directly] with questions about the site.
Comment  |
Email This  |
Print  |
RSS
More Insights
Webcasts
4 Practical Tips for Building a Data Lake
Multi-Cloud Data Management for Modern Applications
More Webcasts
White Papers
Top Serverless Security Risks and How to Mitigate
Ransomware Security Breach Summary: Food Production
More White Papers
Reports
The State of CCPA 2021
Trustwave Global Security Report
More Reports