Data from the New York Police Department shows a shocking rise in grand larcenies. Thefts of high-value items dropped from 2004 to 2010 but have increased each year since. The reason? Thieves are stealing Apple products in record numbers.

City-wide, 8,465 i-devices were snatched from people on subways, buses, and on the street last year -- that's 23 per day. The crimes are classified as grand larcenies in the fourth degree. Apple products account for 18% of all grand larcenies across New York, and the trend is something the new mayor and police chief will need to tackle. In 2002, after the original iPod's debut but long before the iPhone and iPad, only 25 grand larcenies involving Apple products occurred in NYC.

Lawmakers in NYC and in San Francisco have been working on a solution to the problem, but nothing has yet proven effective. The wireless network operators have developed a nationwide database of stolen devices. Devices that have been reported stolen and are on the list cannot be activated on any of the major wireless networks, which effectively makes them worthless for after-market resale. Lawmakers worked with Samsung and others to create a kill switch that would permanently deactivate stolen devices. Though the technology is available, wireless network operators have balked at the idea, citing concerns over lost insurance revenue.

[What new features would you like to see in your next smartphone? Read What Smartphone Makers Need To Do In 2014. ]

While official means for protecting consumers have fallen a bit short, there are still plenty of steps you can take to keep your smartphone or tablet safe. 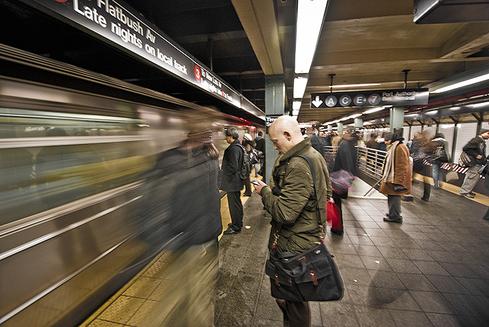 Leave it in your pocket
Most thefts in NYC take place on public transportation when people are staring at their screen and not paying attention to their surroundings. According to the NYPD, it's easy pickings for ne'er-do-wells. It may be tempting to pull out your phone to play a game on the bus or train, but it's all too easy for thieves to snatch it from your hand and dash out the door at the last second.

Use a passcode
Use a password to lock your phone. This simple measure can be all that stands between your data and a thief. Whether it's a simple four-digit PIN or a lengthy alphanumeric code, a passcode can ensure no one can get past the lockscreen. This alone can effectively stop most criminals from accessing your phone and its data.

Use 'Find My Phone'
Apple's Find My iPhone app makes it easy to find lost or stolen devices -- as long as it's been activated. The NYPD strongly recommends using this, even creating its own how-to video showing consumers how to turn it on. The tool can pinpoint the location of a device on a map quickly and easily. Similarly, the Android Device Manager tool from Google lets Android device owners find their hardware and display the location on Google Maps. Not only can these tools be used to recover lost or stolen items, they can also be used to lock them or shut them down remotely. They can even set off alarms or erase data from devices.

Keep regular backups
Back up your device and its data regularly. Whether you back up to a computer or to the cloud, be sure to transfer photos, documents, and other files at least once a week to minimize losses in the event your device is stolen.

Report it
If your device is stolen, be sure to report it to local authorities. That way the device's IMEI number can be added to the national registry of stolen devices, which should help prevent its resale on the black market. Police may also be able to assist in locating and/or recovering the device.