The ThinkPad X1 is Lenovo's thinnest laptop at 0.85-inches thick and can charge its battery to 80% of capacity in 30 minutes. 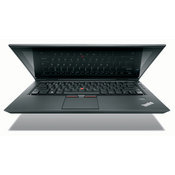 The ThinkPad X1 is Lenovo's thinnest laptop at 0.85-inches thick, and it has a 13.3-inch screen and weighs 3.8-pounds. The company is touting the laptop's ability to charge its battery quickly, saying it will charge to 80% of capacity in 30 minutes, although there is no word how long the other 20% takes. The computer runs Intel's "Sandy Bridge" Core i3, i5, and i7 processors, which are typically offered on Lenovo's larger 14- and 15-inch laptops.

It also features up to 8 GB of DDR3 RAM, a 160-GB solid-state drive, and a USB 3.0 port. The 13.3-inch screen is protected by "indestructible" Corning Gorilla Glass, and the laptop has a LED backlit keyboard and integrated 3G mobile broadband options to connect nearly anywhere. Although Intel's Thunderbolt connection technology provides bidirectional data transfer rates of 10 Gbps, which is roughly twice the speed of USB 3.0, Lenovo elected to remain with the latest version of USB.

"Mobile Internet, user interaction, and the cloud are all redefining expectations," Jason Parrish, ThinkPad segment product manager for Lenovo, said in an interview. "Today, you use your ThinkPad for both home and work life. We've created a device that not only excels at helping users stay productive and improve content creation, it's also a pretty impressive content consumption tool."

The ThinkPad X1 further solidifies the ThinkPad's position as a solid business laptop, Rob Enderle, principal analyst for the Enderle group, said in an interview.

"Its strengths are that it's a very reliable, very sturdy, very capable, thin laptop for the professional," Enderle said. "Its weakness is that it's not as sexy as the Macbook Air. What differentiates it is function over form."

The ThinkPad X1 laptop will be available starting May 17 and starts at approximately $1,399.

The ThinkCentre Edge 91z is an all-in-one desktop, primarily designed for small and midsize businesses, but would work well as a standalone desktop PC. It is powered by Intel Sandy Bridge processors, with models that offer either the i3, i5, or i7 Intel Quad Core processors. It also contains 8 GB of DDR3 memory and an 80-GB solid-state drive or 1-TB hard drive and optional 1 GB of ATI discrete graphics.

The ThinkCentre's 21.5-inch, 1080p HD screen is covered by edge-to-edge glass, with the system components built into the screen, rather than into the computer base, which is just over two inches thick.

The ThinkCentre Edge 91z will be available starting in July starting at $699.

"Lenovo's strength is on the business side, with the Think Pad notebook line having been typically preferred by about two to one over any other line, be that Dell or HP or even Apple," Enderle said. "That is in their DNA and to remain with that emphasis is really critical for them."

In the new, all-digital issue of InformationWeek: Our 2011 Strategic Security Survey shows increased executive interest in security. Here's what you should do next. Download it now. (Free registration required.)