50%
Tweet
Another hybrid notebook hits the market with the launch of the Lenovo ThinkPad P40 Yoga, which features four work modes and a stylus for designers. The company also released the ThinkPad P50s and ThinkStation P310.

This week, Lenovo took the wraps off its latest ThinkPad Yoga, a convertible notebook called the P40, which works as both a tablet and a laptop.

The multimode mobile workstation offers users the ability to work across four modes -- laptop, stand, tent and tablet -- and comes bundled with a highly-responsive pen and touchscreen powered by the Wacom Active ES technology, which offers 2,048 levels of pressure sensitivity on the high-resolution IPS display.

In an effort to lure creative professionals, as well as artists and designers, Lenovo has also provided additional pen tips offering varied levels of tactile feedback for the professional community.

The P40 Yoga, which Lenovo officially announced Dec. 1, also features the company's Lift 'n Lock keyboard, which offers a frame that automatically rises around the keys when the Yoga device switches into tablet mode. 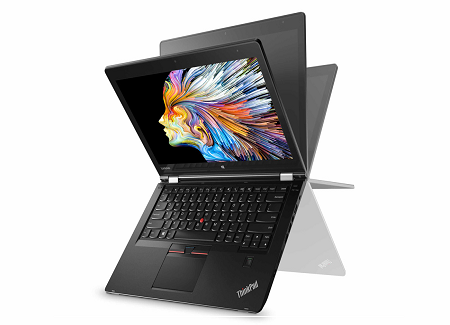 Powered by an Nvidia Quadro M500M GPU, along with 2GB of VRAM, the device features an Intel 6th generation Core i7 processor and up to 16GB of RAM and 512GB of solid state drive (SSD) storage.

Lenovo, like many other PC manufacturers, is looking to find new ways to make their offering distinctive to consumers, as well as businesses. Recent reports from IDC and Gartner find that PCs continued to slip in the third quarter of this year, although Lenovo still managed to top all other PCs in terms of volume of units shipped.

Many PC makers are betting on consumer and corporate refreshes with the release of Windows 10, but it's not clear what affect Microsoft's new operating system has had on the market just yet.

The ThinkPad P50s includes a 3K IPS display and the company's Power Bridge technology, which Lenovo claims will allow for up to 17 hours of battery life. It can also be purchased with the optional ThinkPad Ultra Dock, a new dock featuring more power.

The system also doubles the memory capacity of previous entry-level workstations, offering up to 64GB of DDR4 RAM and support for FLEX drives with Samsung M.2 NVMe SSDs.

[Read about Microsoft, Intel, and the PC market.]

All three devices will be available starting in the first quarter of next year through Lenovo business partners and on the company's website. Pricing for the P40 Yoga begins at $1399, while the ThinkPad P50s begins at $1299, and the ThinkStation P310 starts at $729.

The announcement continues a long steady stream of product launches for Lenovo, which announced the Yoga 900 convertible notebook and the Home 900 portable All-in-One (AIO), which both run Microsoft's Windows 10 operating system, in October.

Nathan Eddy is a freelance writer for InformationWeek. He has written for Popular Mechanics, Sales & Marketing Management Magazine, FierceMarkets, and CRN, among others. In 2012 he made his first documentary film, The Absent Column. He currently lives in Berlin. View Full Bio
We welcome your comments on this topic on our social media channels, or [contact us directly] with questions about the site.
Comment  |
Email This  |
Print  |
RSS
More Insights
Webcasts
Building a Strategy for Detection and Response
Chatbots for the Enterprise
More Webcasts
White Papers
The Insider's Guide to IP Geolocation Data
SANS 2020 Cyber Threat Intelligence Survey Results
More White Papers
Reports
2020 IT Salary Survey Results Revealed
How Enterprises Are Developing and Maintaining Secure Applications
More Reports

Windows 10 has a system requirement of 2GB RAM. However, a few users have been reporting extreme high levels of RAM utilization that might get fixed with the next update or it could be that Windows is beginning to allocate RAM in the fashion that Android employs. If the latter is the case then, 16GB of RAM would be desirable otherwise 16GB might be considered as overkill for the average user.
Reply  |  Post Message  |  Messages List  |  Start a Board
Editors' Choice
Hot Topics