The LG G4 smartphone is impressive on paper, but it's another question entirely if consumers will go for the leather look, especially with competition from the iPhone 6 and Galaxy S6.

Microsoft Office On Android: How To Install
(Click image for larger view and slideshow.)

LG pulled out all the stops with the G4. The company knows it faces stiff competition from the likes of Apple, Samsung, and HTC.

The G4, LG's premium smartphone for 2015, turns to unique design elements to help it stand apart from the crowd. LG hopes the leather skin and top-notch spec sheet are enough to win over the buying public.

The iPhone 6, Galaxy S6, and One M9 all rely heavily on metal and glass materials.

These high-quality basics help create attractive handsets at the expense of weight. LG decided to skip the modern metal-and-glass trend and stick with something it knows well: Plastics. The front of the phone and side edges are all formed from polycarbonates. Knowing plastics can't compete with metal, LG covered the G4's back surface with genuine leather. Available in six colors, the leather has attractive stitching and a timeless, craftsman-like appearance. One can almost imagine a tradesman plying his time-honored craft with the phone. 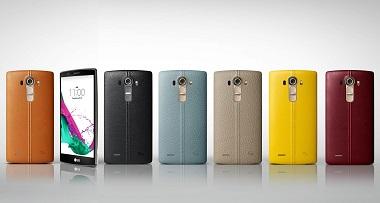 Too bad for LG, it isn't breaking any new ground here. Motorola has offered leather covers for its Moto X handset since last year. Even so, the leather G4 has a certain appeal to it.

About those specs. The phone goes for the throat when it comes to the internals. First, the screen. It measures 5.5-inches across the diagonal and includes 2560 x 1440 pixels (quad UD). LG is using something it calls Quantum IPS to improve the screen's characteristics. It boasts more brightness, color, and contrast when compared to other LCD panels.

The camera is the G4's other killer feature.

The sensor captures 16 megapixels through an aperture of f/1.8. LG claims the G4 lets in 80% more light than phones with an aperture of f/2.4. LG has employed lasers to assist with focus, and a Color Spectrum Sensor reads UV and visible light to more accurately gauge color. LG wasn't shy about comparing the G4's images to those captured by the iPhone 6 and Galaxy S6. In LG's demonstrations, the G4's images looked superior (of course.)

Flexibility is another feature LG believes will help it win over consumers. The iPhone 6, Galaxy S6, and One M9 are all sealed up tight. The G4 features a removable rear cover and a removable battery. Further, the phone supports memory cards for those looking to expand the number of photos or songs they can store on their device.

[Read about the history of smartphone operating systems.]

One question mark is the processor.

Qualcomm Chairman Dr. Paul Jacobs took the stage to talk about the G4's Snapdragon 808 processor. The chip has been specially tuned to the G4 to help improve LTE, geolocation, and battery performance. LG says the 3,000 mAh battery can provide for more than a full day of active use.

All four major carriers are expected to carry the LG G4 later this year. Pricing and color options have not been revealed.

Leather back covers are always good no matter what. It amplifies the phone's beauty by many times and I think the grip would improve, also it would get better protection from scratches.
Reply  |  Post Message  |  Messages List  |  Start a Board

I don't think that people find iphones heavy. Do they ?  If I talk about myself, plastic bodies donot appeal to me. The leather cover itself if exchangable just like back covers can be a good option.
Reply  |  Post Message  |  Messages List  |  Start a Board
Editors' Choice
Hot Topics