50%
Tweet
Work phone, personal phone: LG packs both into the same device thanks to VMware.

IT managers and rank-and-filers alike seem to both love the idea of a smartphone that can straddle the world of work and the world of personal use.

Now LG Electronics' Enterprise Solutions Team has used VMware's Horizon Mobile software on their Revolution handsets to produce a 4G LTE smartphone that uses virtualization to pack both a corporately-managed and a personal smartphone into the same device. 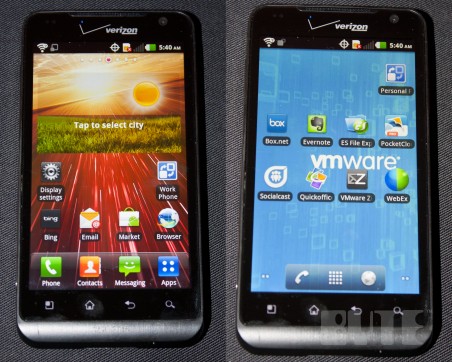 At the 2012 New York CES Press Preview event last night at the Metropolitan Pavilion in downtown Manhattan, LG demonstrated a Revolution handset running two side-by-side instances of Android (2.2) courtesy of VMware's hypervisor. Both were entirely isolated from the other: neither one used the same storage or ran the same apps, and the "work" instance of 'Droid had administratively-restricted access to device hardware, software installation, and phone features.

James Park, president for LG Electronics Southeast Asia Region Representative and Managing Director of LG Electronics in Singapore, demonstrated this in action. To switch between the two aspects of the phone, the user only needs to tap an icon. The switch happens near instantaneously.

The corporate-managed aspect of the phone is entirely virtual, and stored as an encrypted disk image. Data on it is not visible to an outsider, even if the internal memory is removed and mounted somewhere else. It's also possible to set PINs for either part of the phone, although that was disabled for the sake of the demo. Administration options for PINs include PIN length, number of tries, and even a self-destruct option.

Segregation even extends to the network carrier. Park claims the device has separate namespaces for the personal and corporate network. Depending on the carrier, the user can have two discrete phone numbers--one personal, one corporate--and even have both personal and enterprise data usage billed independently of each other. This is made all the easier by 4G LTE not being forced to use either voice sessions or data sessions for a call, since voice calls can be IP-based.

Park states that the device is not meant to be procured directly by enterprises, but rather can be purchased by the user, brought into the workplace and then managed there--in much the same way an end user brings in his own iPhone, for instance, and has that configured by his friendly neighborhood IT department.

Variations on this approach have been surfacing for a while now. AT&T Toggle, offered by that carrier directly to enterprises (and available for phones on all networks, not just AT&T's), has many of the same features: data and app segregation, and centralized device management.

Verizon offers the LG Revolution for $199 with a two-year contract (or $559 without).

Based on Long Island, NY, Serdar is founding senior editor managing reviews at BYTE, the former open source technologies columnist for InformationWeek, and a regular contributor to many other information-technology publications. Follow him on Twitter as @syegulalp and email him at [email protected].