Virtual reality startup collects $542 million in first round of financing, plans to create images in the air similar to R2D2's projection of Princess Leia in Star Wars.

Google SVP of Android, Chrome, and Apps Sundar Pichai will be joining Magic Leap's board of directors, with other executives from Google and Qualcomm joining as observers.

Virtual reality, widely hyped in the mid-1990s with 3D graphics technology Virtual Reality Modeling Language (VRML) and in 2003 through Second Life, is suddenly all the rage again. After virtual reality headset maker Oculus VR won funding through Kickstarter in 2012 and was purchased for $2 billion in March by Facebook, it became clear that there is an audience for immersive 3D entertainment.

[Eager to try Apple's new payment system? Read Apple Pay: Where To Use It.]

Sony joined the fray that same month it revealed its Project Morpheus VR headset at the Game Developers Conference in San Francisco.

And Google introduced a DIY cardboard VR headset, which requires an Android phone, at its developer conference, Google I/O, in June.

Rony Abovitz, president, CEO, and founder of Magic Leap, said in a statement that his company plans to change the way people think about mobile computing, augmented reality, and virtual reality. "We are transcending all three, and will revolutionize the way people communicate, purchase, learn, share, and play," Abovitz said. 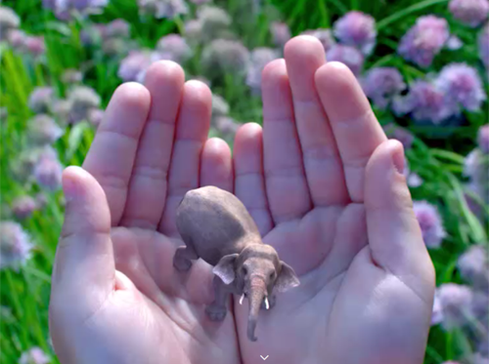 In a blog post, Abovitz says his company aims to extend the visceral experience of real-world activity to mobile computing. Reports about the company suggest it plans to create images in the air similar to R2D2's projection of Princess Leia in Star Wars. The company's website shows a child's hands open to reveal a tiny, floating elephant.

To make its projections visible, Magic Leap is likely to employ a head-mounted display (HMD), but not one that blinds the wearer to the world, like Oculus VR's headset. A Magic Leap patent application, "Ergonomic Head Mounted Display Device And Optical System," describes a see-through HMD with "an eyeglass-form appearance and a wide see-through field of view."

The company is also seeking a patent for a "Massive Simultaneous Remote Digital Presence World" that allows participants to interact through a variety of mobile devices. Imagine Second Life with reality as the background layer.

Two decades ago, virtual reality promised too much. "VRML advocates claim that 3D graphics are somehow better than 2D," wrote Steve G. Steinberg in Wired in 1995. "They're not. Look at the failure of everything from holograms to 3D movies. The only people who want 3D television -- or 3D Web pages -- are technologists impressed with their own skills."

Virtual reality got better with Second Life and games like World of Warcraft, but still failed to sustain mass market interest. Maybe this time will be different.

Thomas Claburn has been writing about business and technology since 1996, for publications such as New Architect, PC Computing, InformationWeek, Salon, Wired, and Ziff Davis Smart Business. Before that, he worked in film and television, having earned a not particularly useful ... View Full Bio
We welcome your comments on this topic on our social media channels, or [contact us directly] with questions about the site.
Comment  |
Email This  |
Print  |
RSS
More Insights
Webcasts
Detecting and Preventing Insider Data Leaks
Hybrid Cloud: The Great Balancing Act
More Webcasts
White Papers
iPaaS Intrigue: A Faster Path to Digital Transformation
Accelerate Threat Resolutions with DNS
More White Papers
Reports
Tech Insights: Detecting and Preventing Insider Data Leaks
Intelligent Outcomes Are Key to Business Resilience
More Reports

Google is really smart. With Google moving ahead with its development of Glass, it seems perfectly plausible that the Web giant could at some point incorporate some of Magic Leap's technology into its own face-based computer.
Reply  |  Post Message  |  Messages List  |  Start a Board

It is a bold step -I should say. If someone talked about virtual reality (VR) in 1999, it was mostly Sci Fi or plot for a Holywood movie. Now, VR is not a concept anymore. We are nearing to it, but I am not sure if the  potential applications will be ready to take care of R&D expenses. To me, VR is exciting, but it has limited applicability.
Reply  |  Post Message  |  Messages List  |  Start a Board

Virtual reality, in a manner similar to that of language translation based on artificial intelligence, have both been the technologies of the future for about a generation now. But, this time around the architects have some powerful components to build with, such as the "Ergonomic Head Mounted Display Device And Optical System" (which makes me think of Google Glass), that you mention. But will we first see virtual reality with mobile devices? I doubt it. Think of how much bandwidth a two dimensional video transmission requires, and then extrapolate to what the third dimension will call for. Maybe the first application will be gaming, or perhaps a simulation where soldiers or police officers can practice dangerous moves in complete safety, or perhaps surgeons can do dry runs of difficult operations.