Windows Phone has neither Android's overwhelming market share, nor the iPhone's stranglehold over high-margin sales. The research firm IDC predicts Microsoft's mobile OS will account for only 3.9% of shipments this year. It's basically an also-ran.

But Microsoft hopes to change that. The company just absorbed 25,000 Nokia employees, an assimilation that poses enormous logistical challenges but shows Microsoft is finally serious about mobility. The company will also soon release Windows Phone 8.1. Unveiled last month as a developers' preview, its new features include a more customizable UI, a notification center, and Cortana, Microsoft's much-hyped answer to Siri and Google Now.

Microsoft VP and Windows Phone Manager Joe Belfiore conducted a Reddit "Ask Me Anything" (AMA) chat on Friday to not only tout Windows Phone 8.1, but also hear participants' criticisms. His tone was enthusiastic but candid. Belfiore defended against claims that Microsoft considers Windows Phone "a second-class citizen." But he also gave the iPhone its due as a disruptive force and acknowledged some upcoming Windows Phone 8.1 features, such as its convoluted Settings screen, should be better. What did the conversation reveal about the future of Windows Phone? Here are three key takeaways from Belfiore's chat.

1. Windows Phone 8.1 will include a file manager.

"WOO HOO! SOMEONE ASKED THIS QUESTION!!" Belfiore wrote when asked if Windows Phone will ever include a file manager. Even though the feature wasn't included in the developers' preview, Microsoft evidently plans to implement it by this May. 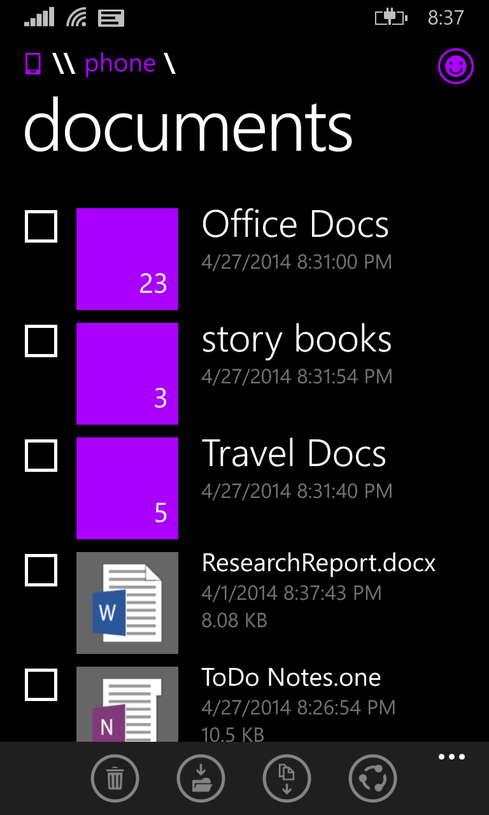 Windows Phone 8.1 will feature a file manager by later this year.

Belfiore not only revealed that Microsoft will launch the much-requested feature, but also offered teases of the UI via a series of screen shots. The screen shots indicate users will be able to look through locally stored files, as well as those on an inserted SD card.

2. Cortana will probably come to Windows -- but Microsoft isn't saying so.

With releases such as the Office suite for iPads, new CEO Satya Nadella has stressed that high-value Microsoft software should move with the user across devices. Based on this reasoning, it should only be a matter of time before Cortana becomes available on Windows, if not also on iOS, OS X and Android.

Belfiore played it coy when asked if Windows Phone 8.1's personal assistant will come to Windows: "Nothing specific to announce, but Cortana herself is always telling us she's a fan of PCs herself." He did, however, reveal that Cortana, initially announced for only U.S. customers, will expand to new markets, starting with China and the U.K.

3. The Windows Phone "App Gap" is closing but not nearly closed.

After more than a year and a half on the market, Windows Phone 8 boasts more than 240,000 apps--respectable, but