MIT's Sloan School of Management is one of several universities using AvayaLive Engage to meld real and virtual classrooms.

8 MOOCs Transforming Education
(click image for larger view and for slideshow)
As online education matures, it must face the challenge of bringing the sensory richness of a physical classroom into the virtual world, rather than just putting lectures online to be viewed in isolation.

One approach is to have some people attend a live class in person and others online. MIT's Sloan School of Management is one of several universities using AvayaLive Engage to meld real and virtual classrooms. In April, Erik Brynjolfsson and Alex "Sandy" Pentland taught a two-day executive class on big data using the platform. It was the second time they'd done so -- the first was in the wake of Hurricane Sandy, when some participants could not attend, so the sessions were live-streamed via the Avaya platform.

April's session was deliberate, with 120 people in the Royal Sonesta Hotel in Cambridge, Mass., and 75 paid attendees online.

"What was really great was it was not just a lecture," said Brynjolfsson, a professor of management at the Sloan School. He said that in other online formats, "it tends to be much more of a one-way thing, not nearly as interactive." In the Avaya world, much like in Second Life, everyone is an avatar and can interact. It uses a 3-D proximity audio technology that allows you to hear people talking around you, but to hear them clearly you must be near them, just like in the real world.

Brynjolfsson said the most striking moment for him came during a break, when he was talking with a virtual participant, avatar to avatar. "While we were talking all these people saw, and they all kind of gathered around. And there was this mob of probably like 40 or 50 avatars all sort of surrounding me and this other person," Brynjolfsson said.

The virtual world isn't exactly like human interaction. The avatars don't walk smoothly, for instance. Brynjolfsson joked that while the other avatars were coming towards him in that break, their stilted gaits made it seem "like zombies coming on me!"

He said that avatars tend to get a little closer than is comfortable, and that it's hard to face another avatar. He thought that perhaps more experience with the software, or switching from a keyboard to a joystick controller, would fix the problems. The software is not the same as in Second Life, either -- avatars can't fly. And Avaya doesn't allow people to make themselves into giant pink bunnies or other non-human forms.

Avatars do still have some superhuman abilities. They can teleport to be with other avatars, useful in a crowded room. When diplomas were handed out at the MIT program, Brynjolfsson said the virtual attendees applauded by jumping up and down, in a virtual equivalent of 10 to 20 feet in the air. "They kind of looked like popcorn," he said. "I turned to my real-world counterparts, who could see this taking place on a huge screen, and said, 'don't worry, you can just clap.'" 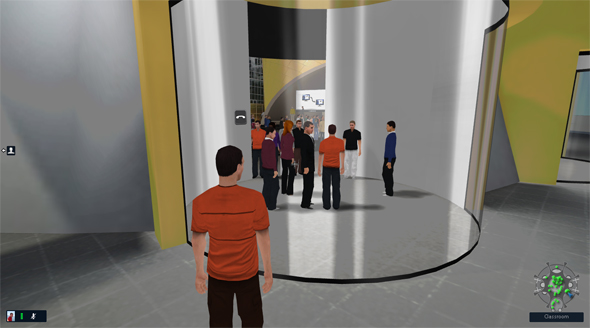 MIT's Sloan School of Management is one of several universities using AvayaLive Engage to meld real and virtual classrooms. Much like in Second Life, avatars enable virtual participants to converse and interact with others.

Overall, "I think this has enormous promise," Brynjolfsson said. "It crossed the key threshold for me, I could see how you could do small group exercises and have people meet each other."

Avaya's software is in use in just a handful of schools right now; its primary market is corporate training. Part of that may be related to price: it costs $600 per virtual user in a hosted environment. (There is also a downloadable version.)

The Second Life phenomenon has faded dramatically, so I don't get why imitating that style of interaction would make sense for educators trying to innovate. There were all sorts of experiments with teaching on Second Life islands a few years ago, but now that's an old enthusiasm people laugh at.
Reply  |  Post Message  |  Messages List  |  Start a Board

I probed on that same point. What people told me is that the three-dimensional audio, the ability to hold conversations that are much like you could have at an actual seminar, changes the dynamic in an important way. I agree that it seems like a small thing, but we've all seen an iterative change transform a failed technology into a groundbreaker. I'll see if Erik Brynjolfsson will comment on this.
It also is a system designed for collaboration, so it's more focused than Second Life. I'm going to file something today about MIT expanding its usage of this system, so we'll have a better sense of its effectiveness over time.
MIchael
Reply  |  Post Message  |  Messages List  |  Start a Board

Interesting. I always thought the tech had the best potential for teaching something like architecture, where you might be touring the virtual representation of a building that doesn't exist yet, or maybe engineering representations of an aircraft or a rocket.
Reply  |  Post Message  |  Messages List  |  Start a Board

I have to say I'm profoundly skeptical about 3D avatars for anything other than online gaming.
Reply  |  Post Message  |  Messages List  |  Start a Board

okay, we're getting hung up on the avatars. What matters is communication. I taught an online course this past spring, and the inability to engage in something approaching a conversation with people was a problem. The ability to have real conversations online would've have been a tremendous help. Think of the avatars as a placeholder for video or something. Or think about this: people get deeply invested in 3D avatars in gaming, so why couldn't they do so in other types of programs?
Reply  |  Post Message  |  Messages List  |  Start a Board
Editors' Choice
Hot Topics

More Informa Tech Live Events
Detecting and Preventing Insider Data LeaksCybersecurity's Next Wave: What You Should KnowStrategies for Success with Digital Transformation