50%
Tweet
The Microsoft Surface is not the only hybrid device of its kind, usable as either a tablet or a notebook computer. In this review we add 3 new products — the Sony Xperia, Acer Iconia W5 and Samsung ATIV Smart PC — to 5 others that we wrote about last week — the Microsoft Surface, Asus Eee Pad Transformer TF101, Lenovo IdeaTab Lynx K3011, and HP Envy.

Everyone knows the Microsoft Surface now because of the ubiquitous and catchy TV ads, but the rest of the PC industry is trying the same thing: Take a tablet and a separate, but attachable keyboard, and sell them as a hybrid device that can be used as either a tablet or a conventional notebook computer.

We had such good feedback from our recent story "How The Surface Compares With The Other Hybrids" that we thought we'd add three more devices to the list: Sony Xperia, Acer Iconia W5 and Samsung ATIV Smart PC. All 8 devices are included in this story, and the feature charts on page 3 are update to include all as well.

Originally, the premise of the article was that the keyboard had to be part of the OEM tablet and close into a clamshell; and while we've maintained the latter, the Iconia's keyboard snaps on but doesn't fold shut. 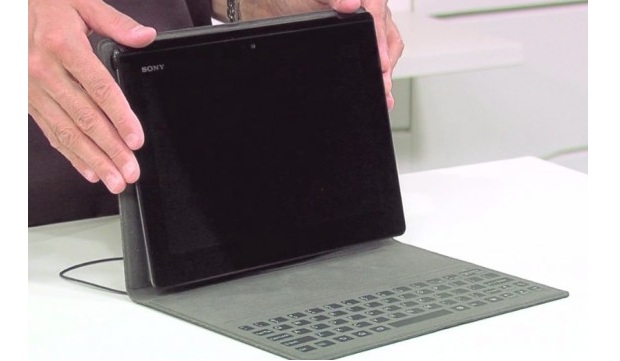 Almost every review you read about the Sony Tablet Xperia S makes a case for the tablet to be a stay-at-home all around family tablet. From its splash-proof protection in the kitchen, a universal remote for the living room and a smudge resistant surface for little fingers, and a guest mode which allows for young people to use it without accessing the web. In this upgrade, Sony moved the speakers from the sides to the bottom so the hands hold it don't inadvertently mute it.

The keyboard/cover — though still OEM — doesn't open like a clamshell as much as creates an angled rest like the Surface. The angle can't be adjusted and it should come with Android 4.1/4.2 (Jelly Bean) out of the box, instead of 4.0 (Ice Cream Sandwich). 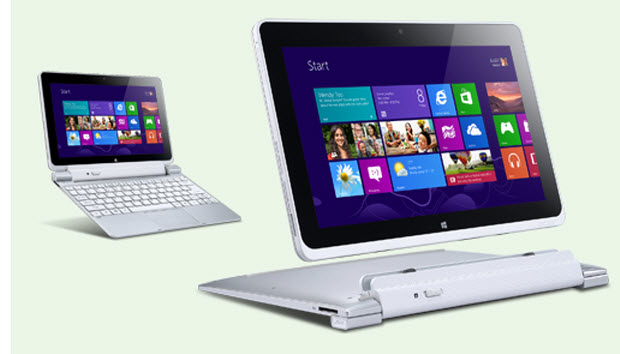 The Acer Iconia W5 clearly is a tablet-first hybrid. The keyboard does not close up like the rest in this list. The keyboard dock — like many other hybrids — has a built-in battery which adds a whopping nine hours of battery life for a total of 18. And that's running Windows 8 (not RT).

The keyboard dock is light — maybe too light because when connected in laptop mode the Iconia is prone to tipping. When bent backwards — what Acer calls the "twist" — the keyboard serves as a stand for the tablet. 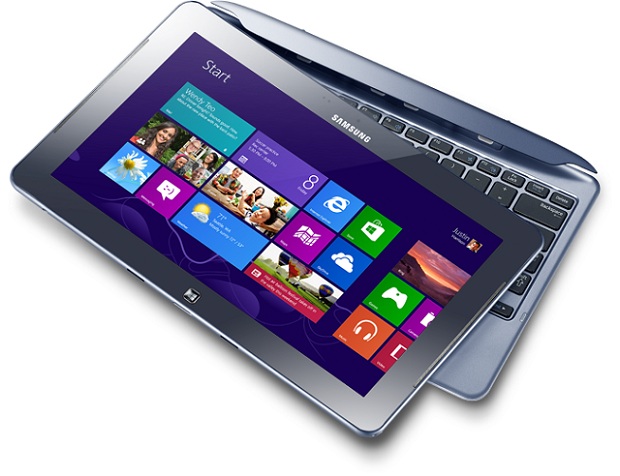 The Samsung ATIV Smart PC's keyboard dock incorporates a touchpad and two USB 2.0 ports, but doesn't include an additional battery, so, again, the tablet is top-heavy and when using it as a laptop — literally in your lap — you're holding it in place with your wrists.

Like other full Windows 8 installs on a growing number of hybrids, users will be tempted to install beefy applications like they would on an ultrabook, but the specs don't support it. According to Tom's Hardware, after Windows 8 is installed, you're left with 39 GB of built-in storage on the ATIV Smart PC. And you'd never buy an ultrabook with 2GB of RAM running any version of Windows.