50%
Tweet
Motorola's new mission: Make its products consumerization-of-IT friendly. Will it pay off?

How seriously does Motorola want to be taken in the CoIT space? Very.

That's how Christy Wyatt, senior vice president and general manager of enterprise mobile devices division for Motorola, wants people to see it. She's been in charge of the newly-minted division for some six months now, and during a roundtable invitation-only event in New York on Wednesday she sat with a small clutch of press folks and answered questions about Motorola's current and forthcoming inroads into the consumerization of IT, a.k.a CoIT.

"CoIT is exploding," Wyatt said, an assertion no one in the room challenged. She went on to describe how Motorola planned to make the best of that situation. For IT managers, she pointed out, the problem is not with CoIT-ed devices that are in the 10% of the smartphone market that is made up of pre-approved, managed corporate devices. The problem lies in the 30% of the market that's the prosumer space--people who know exactly which phone they're going to get and demand support for from their IT guy as soon as it comes out. This has created a management challenge for IT like nothing seen before.

Motorola's initiative for building devices that satisfy that CoIT segment is branded with the slogan "Business Ready"--a way to describe Android devices that have been built from the inside out by Motorola to satisfy that need. This means more than just hardware. It also includes OS-level customizations to make Android more IT-department friendly. 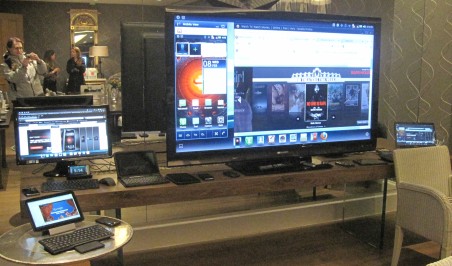 Motorola hardware on display. Its current generation of devices is designed to be more manageable--and more CoIT friendly.

The gap between what Google has provided for IT departments faced with CoIT issues and what those same departments actually need has been narrowing with each successive revision of Android--but Motorola wants to give everyone involved as few excuses as possible to use Motorola's devices. To that end, "clearly you have to start with the IT organization," Wyatt said, and enumerated three things IT departments ask of Android: Is it secure? Is it manageable? What will it cost?

Regarding the first two concerns, Motorola found that simply bolting a software layer on top of Android wouldn't cut it. Motorola wanted to bake as much functionality directly into the mobile operating system as possible, and one of the ways it did this was through the acquisition of 3LM about a year and a half ago.

3LM's mobile device management system does not work by sandboxing the entire phone into "work" and "personal" sections like LG's solution. Instead, it allows individual apps to be designated as work or personal, and by allowing specific behaviors to be sandboxed instead. For example, a sandboxed work app would be designated by a special icon set; might have cut-and-paste capabilities to all work apps disabled; and would take all of its data with it when locally or remotely wiped from the phone. Also, things such as geolocation can be used in 3LM security policies—e.g., "Disable the camera when you're in the corporate offices."