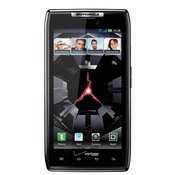 Motorola Droid RAZR Smartphone
For Motorola and Verizon Wireless, it appears as though Veterans Day is really D-Day. Verizon commences sales of the Motorola Droid RAZR, its latest Android smartphone, at 11:11 a.m. (local time) on November 11, 2011. Both companies are hoping the RAZR will be a hit.

Motorola's original RAZR cellphone, while a certified platinum seller with more than 50 million units sold, eventually came to symbolize the failures of Motorola's management. Rather than design new and exciting new devices, Motorola provided incremental updates to existing phones, slapped the RAZR name on them, and shipped them off to the network operators.

The Droid RAZR is a whole new animal.

First, it isn't a feature phone and isn't a flip phone (as was the original RAZR). It's an Android 2.3 Gingerbread smartphone with Long Term Evolution 4G on board, and owns one of the thinnest profiles--7.7 mm--in the business.

From a spec perspective, it would appear to have it all: dual-core 1.2-GHz processor, 8-megapixel camera with HD video capture, qHD 540 x 960 display, 32 GB of storage for media and files, and Kevlar (yes, the stuff bulletproof vests are made of) built into the phone. It is light, has a large screen, and winning looks. Surely it will be a success. Right?

The RAZR has a few drawbacks, the biggest of which is miserable battery life when under 4G coverage. The display also looks a bit iffy thanks to the PenTile technology used to create it, and the camera doesn't produce the best results.

The RAZR will cost $299.99 with a new agreement and will require the standard voice and data plan. Here's where things get really interesting. Verizon Wireless is running a promotion (which started Tuesday) whereby new and existing customers can double their monthly data allotment at no extra cost. The promotion runs through the end of the year, and lets Verizon customers boost how much data they use each month. There are a few caveats and provisos.

-- All new customers who purchase a 4G smartphone are eligible for the double data plans.

-- Existing customers who have upgraded their service or purchased a 4G smartphone within the last 14 days will be eligible for the double data plans.

-- Once a customer has the plan, they keep the plan as long as they are on a 4G smartphone.

This is important: the promotion only applies to LTE 4G smartphones, and not devices such as mobile hotspots or laptop dongles. It will automatically be offered to new customers, but existing customers will need to use Verizon's online account tools to reconfigure their plan.

The only question remaining is, will you line up Friday to score a new Motorola Droid RAZR? Let us know in the comments below.