The Motorola Moto X Style, Moto X Play, and Moto G offer something for everyone in customizable packages.

Motorola showed off three new Android handsets, as well as two stereo Bluetooth headsets, at simultaneous events in New York City, London, and Sao Paulo today. Two versions of the Moto X will go head-to-head with Apple and Samsung, while the Moto G will target the middle of the market.

The Moto X Style -- or Moto X Pure Edition as it will be called in the US -- is an improved version of last year's flagship handset. The design is similar, but most of the specs have been boosted under the hood. Motorola stretched the screen out to 5.7 inches and packed it with quad HD resolution. The phone is powered by a 1.8 GHz octa-core Snapdragon 808 processor paired with 3 GB of RAM. The phone will be sold in 16GB, 32GB, and 64GB variants, but it also supports memory cards up to 128GB.

Motorola paid particular attention to the cameras. The main camera has a 21-megapixel sensor with an aperture of f/2.0. Motorola improved the camera software and claims the Moto X Style is its best imaging device ever. The user-facing camera captures 5-megapixel images and has a flash of its own for better selfies.

Other features include stereo speakers, fast-charging, NFC, Bluetooth, WiFi, and GPS. The phone will be sold unlocked in the US. It supports all carriers' LTE 4G networks. Pricing starts at $399. As with the 2013 and 2014 Moto X handsets, this year's phone can be fully customized through Motorola's online Moto Maker website. It goes on sale in September. 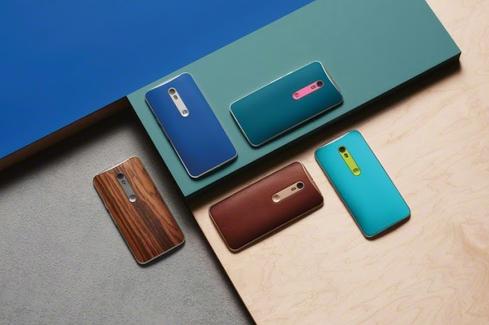 The Moto X Play, intended for worldwide markets, dials back the specs a bit. The screen measures 5.5 inches with 1080p HD resolution. The phone has a 1.7 GHz octa-core Snapdragon 615 under the hood with 2GB of RAM. The most impressive feature is perhaps the massive battery. Motorola crammed a 3,640mAh power cell inside that it says provides two full days of battery life. Most other features mirror those of the Moto X Style.

The Moto G is for the commoner. This mid-range wonder is an excellent value at $179.

The G's killer feature? It's waterproof.

You can dunk it in your swimming pool for up to 30 minutes with no worry that it will die a watery death. The other significant upgrade for the Moto G this year is that it finally earns support for LTE 4G networks. The previous versions were limited to HSPA.

Like the Moto X, the Moto G will offer consumers the option to customize it through the Moto Maker tool. Motorola is offering a handful of different-colored rear shells and several accent colors as well. The Moto G is available online beginning today.

All three phones ship with Android 5.1.1 Lollipop. Motorola uses the stock code from Google, so there is no user interface skin to speak of. The only real software addition is Moto Assist, which lets people control their phone via voice commands.

[Find out why Apple's iPhone success can only go so far.]

All three handsets are solid entries from Lenovo-owned Motorola. The Moto X goes toe-to-toe with the Samsung Galaxy S6 and iPhone 6. The Moto G outclasses other handsets in its price range.

Motorola did not announce a new smartwatch today as expected, but the company said it has more news planned for later in the year, and a watch will be part of the discussion at that time.

Eric is a freelance writer for InformationWeek specializing in mobile technologies. View Full Bio
We welcome your comments on this topic on our social media channels, or [contact us directly] with questions about the site.
Comment  |
Email This  |
Print  |
RSS
More Insights
Webcasts
What We Can Learn from Sports Analytics
5 Steps to Solving Modern Scalability Problems
More Webcasts
White Papers
The Network for Whatever's Next; A CxO Guide
What To Consider Before Renewing Your SD-WAN
More White Papers
Reports
The Drive for Shift-Left Performance Testing
Special Report: The Changing Face of Threat Intelligence
More Reports
Copyright © 2021 UBM Electronics, A UBM company, All rights reserved. Privacy Policy | Terms of Service