Microsoft CEO Satya Nadella says his company is "streamlining" Windows into a converged OS, and "right-sizing" its device efforts. But what does this really mean?

Microsoft CEO Satya Nadella said during this week's earnings call that the next version of Windows will "streamline" from three operating systems -- Windows, Windows RT, and Windows Phone -- "into a single, converged [OS] for screens of all sizes." He also detailed Microsoft's scaled-down device strategy, including its integration of Nokia, a subject Nadella had previously broached in only the broadest terms.

Windows 8 earned its reputation as a flop largely because it threw a hodgepodge of interfaces at users. Microsoft's Surface tablets, meanwhile, remain a controversial and money-losing experiment (though, to give credit where it's due, company execs say the newly-released Pro 3 is outselling earlier models). Microsoft also just laid off half the workers who joined in the $7 billion Nokia merger. Given the somewhat chaotic context surrounding Microsoft's OS and device strategies, it's worth exploring what exactly Nadella plans to change.

Regarding the next version of Windows -- which is codenamed Threshold and likely will hit the market as Windows 9 -- Nadella wasn't talking about a single UI that magically scales across devices. There won't be a desktop on your phone, and it's unlikely that touch-oriented Live Tiles will appear by default when Threshold loads on PCs and laptops. 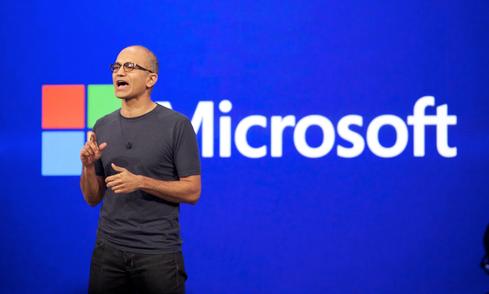 When Nadella says Microsoft is making "one" Windows, he still means there will be different versions for different device types and different groups of users. If that sounds confusing, here's Nadella's more nuanced description of the transition: "We will unify our stores, commerce, and developer platforms to drive a more coherent user experience and a broader developer opportunity."

When asked for more details during a Q&A with analysts, Nadella said, "Now we have one team with a layered architecture that enables us to, in fact, for developers, bring that collective opportunity with one store, one commerce system, one discoverability mechanism." He added that Windows versions will still be segmented, with multiple variations targeted at enterprises, as well as low-cost and free OEM versions to drive manufacturing of budget devices. Nadella said his plan has "more to do with how we are bringing teams together to approach Windows as one ecosystem very different than we, ourselves, have done in the past."

Nadella's statement wasn't necessarily news as much as a natural extension of the "universal apps" concept the company announced last April at Build, its developers conference. Universal apps allow developers to target multiple form factors from largely the same codebase and tools. No one at Microsoft thinks apps should behave the same way on a smartphone that they do on a traditional, mouse-reliant PC. But users' data should be able to translate across devices, and reconstitute itself according to the strengths of whatever gadget the user chooses. Before, developers had to laboriously engineer such cohesion bit by bit, essentially building multiple versions of an app from scratch, using different tools and frameworks for each. Now, developers will be able to largely re-use code, and to create experiences that move from device to device as easily as users -- at least that's Microsoft's pitch.

Within Microsoft, meanwhile, engineers will work together more closely. It makes sense for OneNote or Excel to have different UI elements on tablets than on conventional PCs, but it doesn't make sense for the two different teams to design two different apps, and then worry after the fact about uniting them. It also makes sense for Microsoft to release great versions of OneNote on other platforms, but to bake it and other services deeply into Windows, so as to provide the most grounds-up, integrated, and productive experience.  When Nadella talks about a unified Windows, this is the kind of change he's talking about.

Based on the most recent unconfirmed reports, online leaks, and the few specific details Microsoft has teased, Threshold will recognize the kind of

You're right; that could have been phrased better. It would be more accurate to say that no Start screen will be included by default in the desktop UI-- so no hopping back and forth between interfaces like there is now. Live Tiles (albeit evidently not as touch-centric) will be integrated into the Start menu, though it sounds like users will be able to control what appears, so if there aren't any Modern apps you like, you should be able to largely purge them. The Live Tiles themselves won't be so touch-centric, meanwhile. Most notably, they'll be able to launch into windowed mode, like legacy apps, not just full-screen mode.
Reply  |  Post Message  |  Messages List  |  Start a Board

True, the universal apps I've seen so far seem sort of rudimentary compared to some of the complexity one would expect if this premise has legs. This line of talks has been percolating throughout the Microsoft camp since before Nadella took over, so we'll see if they can pull it off.
Reply  |  Post Message  |  Messages List  |  Start a Board

> if you're a Windows developer, it doesn't matter whether you're writing apps primarily for the desktop, for tablets, or for phones-- you'll still have a framework that allows you to target the other form factors without re-writing code

I'll be impressed if Microsoft can make that a reality. Developing software for multiple devices isn't always just a matter of different builds for different devices. Sometimes what works on one form factor fails on another.
Reply  |  Post Message  |  Messages List  |  Start a Board

Ok, I can see the opportunity for the developer: write one app, get a potentially large audience -- when you factor in all Windows users. But still, developers need to consider whether the Windows Phone user base will ever grow enough (or at all) to justify putting effort into Windows app dev over Android or iOS.
Reply  |  Post Message  |  Messages List  |  Start a Board

I tend to agree with you. Nadella is an intellectual and gets caught up in high-minded rhetroic (with occasional lapses into business-speak). He's not unlike Pres. Obama in that sense. Earnest but a bit too cerebral. He needs to incorporate more bullet points into his arsenal.
Reply  |  Post Message  |  Messages List  |  Start a Board

I suppose Microsoft is doing what it should. It should simplify Windows to "One Windows" across all devices. It's good branding. But the OS doesn't matter anymore for getting stuff done across devices. MS was doing the same sales pitch when Windows 8 released, saying that Windows Phone was compatible with Win 8 and you could work seamlessly between PC, tablet, and phone. But in reality, diversity rules and cloud-based apps connect the dots. Just yesterday, I dropped some photos from my Android phone in Dropbox and accessed them on my work Mac. Added to my to-do list in Evernote on my Windows 7 PC, and viewed the list later on my Android phone. Added songs to Spotify on my Android tablet, and listened to them later on the Windows 7 PC. You get the point. "One Windows" is good marketing, but that's about it.
Reply  |  Post Message  |  Messages List  |  Start a Board

I probably could have paraphrased Nadella, instead of quoting him directly from the earnings call, since he stumbled a bit over the statement. But he basically means that if you're a Windows developer, it doesn't matter whether you're writing apps primarily for the desktop, for tablets, or for phones-- you'll still have a framework that allows you to target the other form factors without re-writing code; you'll have the same app store, including the same search and purchasing tools; etc. Just because Windows exists on multiple form factors doesn't mean Microsoft needs semi-seperate or wholly seperate teams, app stores, purchase mechanisms, and so forth for each one. That's what he's getting after.
Reply  |  Post Message  |  Messages List  |  Start a Board
InformationWeek Is Getting an Upgrade!