Nokia's Lumia 920 and 820 smartphones have innovative features. But it's disconcerting that Microsoft isn't ready to show all that Windows Phone 8 has to offer.

Nokia has been dropping not-so-subtle hints that Wednesday's big Lumia smartphone reveal was the Big Event. It teased Samsung about its first Windows Phone 8 device, and even took to Twitter to thumb its nose at Android. Sadly, the news didn't quite have the impact that perhaps Nokia--and more importantly, Microsoft--had hoped for.

Nokia introduced two phones, both of which run Windows Phone 8: the Lumia 920 and Lumia 820. In terms of specs and features, Nokia did its best to differentiate them from the crowded smartphone masses. Both come in multiple colors on polycarbonate shells.

[ For more on the anticipated new smartphones from Nokia and Motorola, see Motorola And Nokia Smartphones: What To Expect. ] 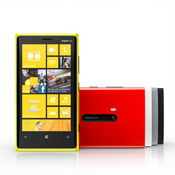 The 920 offers a 4.5-inch display with curved glass and Nokia's "ClearBlack" technology. This makes for richer contrast and deeper blacks. The display has 1280 x 768 pixels and runs what Nokia bills as PureMotion technology to reduce blur and increase clarity. Last, the display uses new Synaptics technology that renders the device usable even when the user is wearing gloves (or mittens, as demonstrated).

Nokia spent a lot of time talking about the camera. It's an 8-megapixel shooter that uses Nokia's PureView technology. Nokia explained that the entire camera module is mounted on springs to reduce shake. It also has a wide aperture and other low-light imaging characteristics to improve overall performance.

Microsoft's Joe Belfiore provided a deep dive into the camera's many features, which include some really cool software lenses and effects that can be applied. It is fast, offers a neat burst-shot mode, and can--sort of--create GIFs (animated still images) on the fly.

Nokia continued to demonstrate its commitment to location-based services. The 920 will include GPS and Nokia's entire suite of location and navigation apps, including Nokia Transport, Nokia Maps, Nokia Drive, and Nokia Traffic. Together, they're powerful tools that will work even when there is no network connection available.

Other features of the 920 include a big battery, near-field communications for easier device pairing and content sharing, and wireless inductive charging. 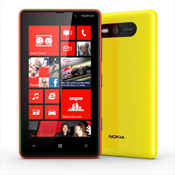 The Lumia 820 is a step down in terms of technology, but it is still a decent device in its own right. It has a 4.3-inch display, an 8-megapixel camera with a Carl Zeiss lens, and removable, customizable plastic backings. The screen offers a mediocre resolution, at 800 x 480 pixels, and the device has less distinctive styling than the 920. Both devices are powered by the same 1.5 GHz dual-core Snapdragon S4 chip from Qualcomm.

By themselves, the new Lumia 920 and 820 are fine devices. So what's missing? Details about Windows Phone 8. At this point, Nokia has proven that it can churn out differentiated hardware. What we really need to know from Microsoft is how it is going to sell Windows Phone 8 to consumers. With no details to speak of, Microsoft's next-gen platform is still mostly unknown.

Microsoft's Belfiore showed a few more details about the platform, but most of them were centered on the camera experience and the home screen experience. He also talked a bit about Internet Explorer 10's new HTML5 powers. Microsoft didn't, however, offer any nitty-gritty details on other new user-facing features of Windows Phone 8--for example, what's different about the email app? How have the settings controls been revised? How deep is social networking integration? And what about that vital enterprise support?

Did Nokia put on a good event? Sure. Did it show us some cool new devices? Yes. But it didn't provide a complete picture of what the new phones really have to offer.

Download the debut issue of InformationWeek's Must Reads, a compendium of our best recent coverage on enterprise mobility in our new easy-to-read and -navigate Web format. Included in this issue of Must Reads: 6 keys to a flexible mobile device management strategy; why you need an enterprise app store; and Google points to the future of mobile. (Free registration required.)

We welcome your comments on this topic on our social media channels, or [contact us directly] with questions about the site.
Comment  |
Email This  |
Print  |
RSS
More Insights
Webcasts
Take DevOps to the Next Level
Managing a Hybrid Cloud Infrastructure
More Webcasts
White Papers
Get Continuous Visibility to Active Directory Exposures and Live Attacks
SANS Institute Survey: The State of Cloud Security
More White Papers
Reports
We Need Your Input: Trends in Workforce Optimization
Key Strategies for Managing New Risks in Cybersecurity
More Reports