Nokia returns to the mobile hardware game with the N1 tablet, which resembles an iPad Mini but runs Android 5.0 Lollipop.

Nokia may have sold its mobile phone business to Microsoft earlier this year, but that's not stopping it from stepping back into the ring with the N1 tablet. The company revealed the branded slate Tuesday, marking its bid to remain relevant in a world dominated by mobile devices. Can Nokia succeed with tablets where it failed with smartphones?

The N1 is an iPad Mini lookalike. It boasts the sleek industrial design Nokia's hardware was well known for. At 6.9 mm, it is remarkably thin. It features stereo speakers, aluminum construction, and comes in two shades. The tablet features a 7.9-inch display with 2048 x 1536 pixels, which matches the size and resolution of the iPad Mini exactly. The N1's LCD panel is protected by Gorilla Glass 3. The tablet is powered by a 64-bit Intel Atom Z3580 quad-core processor at 2.3 GHz. It is accompanied by a 533 MHz PowerVR G6430 GPU, 3 GB of RAM, and 32 GB of internal storage.

Nokia's tablet boasts two cameras: an 8-megapixel shooter on the back and a 5-megapixel shooter on the front. Both can capture 1080p HD video. Nokia claims the device offers high-fidelity sound with two 0.5-watt speakers and support for a range of audio codecs. Wireless radios include dual-band WiFi and Bluetooth 4.0, but not LTE. The device has a six-axis gyroscope and accelerometer, and a 5,300 mAh battery. Nokia didn't say how much battery life the power supply provides.

[Meanwhile, Microsoft's first smartphone without the Nokia brand is a bit of a snooze. Read Microsoft Lumia 535: First Non-Nokia Smartphone.]

The N1 will run Android 5.0 Lollipop out of the box, and it will include the Nokia Z Launcher. The launcher, which is available to all Android devices today in beta form, is an alternate series of home screens and controls for surfing content. Nokia says the launcher learns as it goes and will show different information as the day goes on. For example, first thing in the morning, the home screen will show the day's calendar and traffic into the office. At midday it might provide reminders about late-afternoon appointments and suggest an alternate route home to avoid construction delays. In the evening, it can be set to prioritize social networks and sports scores, depending on the user's interests. 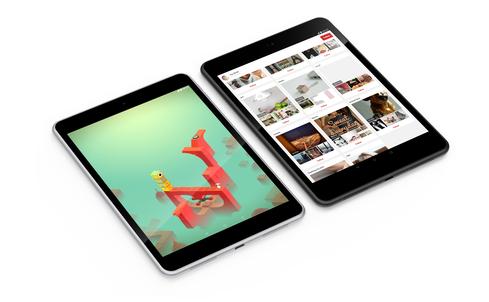 Nokia may have designed the N1 tablet, but it isn't building the slate -- Nokia has licensed its brand and the N1's design to Foxconn, which will manufacture the hardware. Aside from a plant in India Nokia retained due to local tax issues, the company has divested all its phone- and tablet-making facilities. Nokia's main businesses are designing telecommunications gear and managing services such as HERE Maps. (Apple also uses Foxconn to make its iPhones and iPads).

The N1 tablet will first target China, where it will go on sale for approximately $249. Nokia didn't say if or when it might reach the US and other markets.

Based solely on the images provided by Nokia, the N1 is an attractive device. As long as it performs on par with other Android tablets in the same price tier, the Nokia brand may help the company gain a toehold in the market.

I attended the Slush conference in Helsinki, Finland, where the Nokia's N1 tablet was launched on Tuesday. I got a demo and could play with the tablet as well. :)

Yes, it's a look-alike the iPad mini, but different.The two shades of grey are similar. It's absolutely light. I believe it's the lightest tablet so far, even lighter than the iPad mini and you can really feel the lightness immediately.

Oh, I agree.  I started with teh first Samsung Tablet that came out years ago, and from there ended up getting an iPad merely for consolidation purposes.  But to date, the bulk of my home automation, particularly my home theatre runs of a Dell Windows tablet.  Each OS has great benefits, it's really about figuring out how you use your devices and finding, as you said, the right platform and device for those needs.
Reply  |  Post Message  |  Messages List  |  Start a Board

One of the main appeal points for me regarding androids is that there's a version for any type of consumer. There are those that are bare bones, and those that are for power users.

I have a nexus 7 and absolutely love it. I'm an apple fan, but the nexus simply seems to fit all my needs (specially when wanting to perform more specific geeky tasks)
Reply  |  Post Message  |  Messages List  |  Start a Board

I agree.  As consumers start to get settled into choosing a main OS for their mobile devices, its nice to see design finally catch up for the Android side.  In the past it seemed as if Apple had the strong consumer appeal due to their innovative products, but now as the market share continues to grow for Android it's nice to see some of those innovations start to improve the market for Android devices.
Reply  |  Post Message  |  Messages List  |  Start a Board

I have to say...kudos to Nokia for trying to still be relevant and a player in this highly competitive tech market.

Unlike Blackberry, Nokia is trying to innovate and yet provide a user experience that most consumers are already accostumed too, reason why adopting an android based tablet is a good move.

In fact, if they follow the same venue as HTC, to provide both an Android and Windows based tablets, the options are even better.

This is very exciting, if Nokia can focus on both innovation, and being able to integrate well with the existing ecosystems (utilizing existing platforms that consumers can use, like Chrome Cast and the like), it definitly has a shoot at both keeping in the race and be able to call a territory it's own.
Reply  |  Post Message  |  Messages List  |  Start a Board
Editors' Choice
Hot Topics